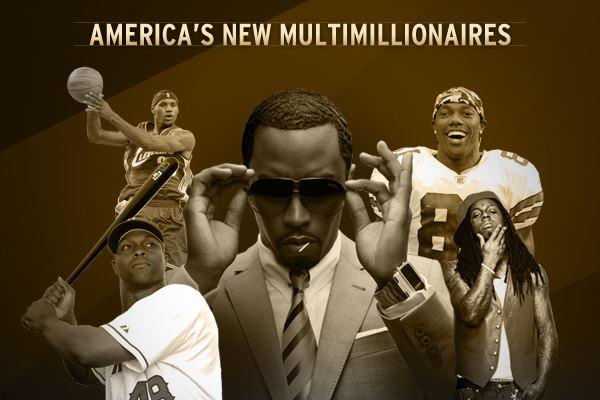 CNBC has produced a one hour documentary entitled – Newbos. (New Black Overclass) It’s an American success story. Self-made black multimillionaires, many of whom grew up poor, have made vast fortunes in the sports, entertainment and media industries.

The new moguls made their millions under the age of 40, primarily by taking more ownership and control over their brands than their predecessors. Collectively, black athletes in the NFL, NBA, and in Major League Baseball earned nearly $4 billion last year and the nation’s 20 highest-paid hip-hop entrepreneurs brought in more than $500 million. Now, with their newfound wealth come responsibilities to their family, friends, and community.

Based on Lee Hawkins’ forthcoming book of the same title, NEWBOs: The Rise of America’s New Black Overclass examines the growing responsibilities of black celebrities in the Obama age. The project features personal stories and interviews with some of the biggest names in sports and entertainment. It’s an inside look into how each successful NEWBO surmounted challenges to achieve the American Dream.

The programme features the following.
NBA Star LeBron James
LeBron James is one of the most dominant forces in professional basketball and he’s one of the highest paid pitchmen in sports. A few years ago, he shocked the sports world when he fired his agent and seized control of his own brand. He also recruited trusted childhood friends, all African-American, to help build his own company in partnership with them.

Major League All-Star Torii Hunter
Torii Hunter is one of the best and highest paid players in baseball. The star centerfielder has a $90 million, five-year contract with the Los Angeles Angels of Anaheim. But, for Hunter, it isn’t fame or lucrative contracts that inspire him. He uses wealth and influence to expose more African-American children to the game of baseball and change the lives of young African-Americans.

NFL Star Terrell “T.O.” Owens
Veteran wide receiver Terrell Owens has been overpaid, underpaid, loved and hated during his NFL career. Outspoken and confident, Owens feels a responsibility to black America. He raised funds for Alzheimer’s research and created the “Catch a Dream Foundation” to help families in need.

The Williams Brothers of Cash Money Records
Cash Money Records, home of recording artist Lil’ Wayne, is one of the most successful labels in the history of hip-hop. Owners Ronald “Slim” and Bryan “Baby” Williams turned a small street-side business into a booming multi-million dollar company. They also helped set new standards for the music industry when the brothers demanded ownership of their masters.

Gospel Artist Kirk Franklin
Kirk Franklin is the best selling recording artist in the history of gospel music. With 14 million albums sold, he’s had a profound commercial impact on the evolution of gospel that took off as the popularity of black churches and televangelism exploded.

Entrepreneurs and BET Founder Bob Johnson
Bob Johnson became the first black billionaire in America when he sold his company, Black Entertainment Television, to Viacom in 2000 for an estimated $3 billion. Now, through his RLJ Companies, Johnson is promoting both collaboration and mentorship between blacks.