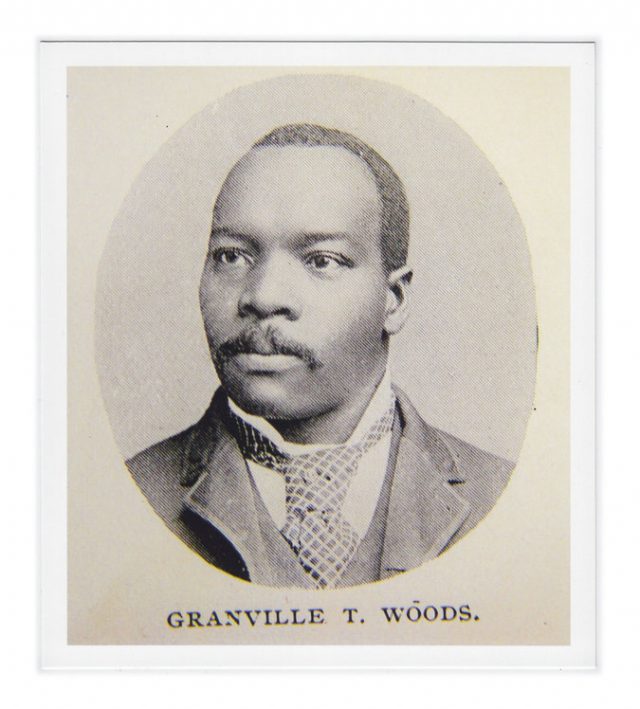 An inventor known as the ‘Black Edison.’ He
found that recognition came at a hefty price.

He carefully sealed the drawings in a mailing tube and quietly placed them out of sight from his business partner, then went to a meeting.

But when he returned, Granville T. Woods found that his drawings — a design for a novel invention that held the potential to revolutionize transportation around the world — were gone.

Woods had a pretty good idea where they were, and confronted his business partner. They came to blows, and his partner’s son joined the fray, leaping on Woods’s back and choking him.

That dramatic moment, later outlined in a court case, encapsulated how desperately Woods, the most prolific black inventor of his day, fought for recognition for his projects.

Woods is best known for working with electricity in the late 1800s. He is credited by some as having invented the third rail, or at least making significant improvements to it, allowing subways to operate. He also invented safety and communication mechanisms for rail systems.

It was the dawn of the electrical age, and Woods was elbowing greats like Thomas Edison, Alexander Graham Bell and George Westinghouse, garnering headlines in newspapers across the country and even earning the nickname “Black Edison.”

Woods spoke eloquently and dressed elegantly, often in all black. He would tell people he was born in Australia, a fact many biographers now believe he fabricated to garner respect and dissociate himself from slavery in the United States.

“Back then most black people couldn’t read or write, let alone explain something as dangerous as electricity,” he said.

But the recognition came at a hefty price. Woods spent all of his money on legal battles to gain credit for his inventions and barely had enough to survive. He became temperamental and conniving, and abusive toward his wife. When he died, he was destitute and all but forgotten.

“Woods’s life — at times closer to a nightmare than the American dream — clearly illustrates the harsh realities of being a black inventor at the end of the 19th century,” Rayvon Fouché wrote in “Black Inventors in the Age of Segregation: Granville T. Woods, Lewis H. Latimer and Shelby J. Davidson” (2003).

Woods’s big breakthrough, in the 1880s, was a communication system for railway workers that he referred to as the induction telegraph. Conductors had a very poor way of communicating with rail stations, so if two trains were heading to the same place at the same time, a collision was all but certain. Woods’s invention suspended a coil beneath the train so that as it moved along the rails, a magnetic field would be created around it, allowing messages to be sent uninterrupted.

But before he could file for a patent, he contracted smallpox and was bedridden for months. In that time, another inventor named Lucius Phelps beat him to the punch. Woods was shocked when he saw an article in Scientific American crediting Phelps for a version of the communications system he had been working on for years. He quickly finished his design and applied for a patent, setting off an investigation to determine who started developing the technology first.

Woods was able to show notes, sketches and a working model of the invention, and he secured the patent in 1887.

Woods became embroiled in patent interference cases for more than a dozen of the 45 patents he obtained in the United States, according to Fouché’s book. He would often have to supplement his inventing career with side jobs for which he was usually paid a pittance. At one point he gave his landlady part ownership in his company in exchange for room and board.

“In the most basic sense, Woods’s day-to-day activities can best be described as surviving and even hustling,” Fouché wrote.

Woods married in 1890, but his wife filed for divorce a year later.

“He didn’t have money to provide,” said Head, the researcher. “He had a temper and would physically and verbally abuse his wife. She wanted his time, his attention. She wasn’t getting that.”

His most ardent fight was against James S. Zerbe, his business partner at the American Engineering Company, which the two started in 1891. It was Zerbe whom Woods accused of stealing his plans.

Woods was hoping to improve the way electricity powered trains, and was especially drawn to the idea of the third rail, which powers trains from underneath rather than from wires overhead.

Some version of this had already been in place, but only for light rail above ground, Head said. Before Woods, no one had figured out a way for it to be powerful enough to propel trains underground, he said.

Woods and Zerbe would eventually go to court over ownership of the invention. Though Woods won, Zerbe had already patented the design in Europe. It was valued at $1 million.

Woods continued inventing and found moderate success selling his work to General Electric and Westinghouse. One of his later inventions for Westinghouse was an automatic air brake, an early version of a so-called dead man’s switch, which slows or stops a train to prevent impact if a conductor is incapacitated. In 1896 Woods made enough money to buy a farm in Rockland County, N.Y.

In 2004, thanks to Head’s promotion of Woods’s work, New York City issued four million commemorative MetroCards about Woods and an exhibit about him was put on display at the Brooklyn Public Library.

“His modifications made the subways in New York City possible,” Head said.

Records are scant, but researchers believe that Granville Taylor Woods (sometimes spelled Tailer) was born on April 23, 1856, in Ohio. His mother was a washerwoman and his father was a sawyer.

As a boy, he was transfixed by the coal-powered locomotives chugging through the prairie. When he was about 10, he got a job at a railroad shop to help support his family and learned about metal making and mechanical engineering. Later, he worked for a railroad company pitching coal into the furnaces of train engines before he was promoted to engineer.

He died on Jan. 30, 1910, at 53, of a cerebral hemorrhage, a complication of smallpox. His burial at St. Michael’s Cemetery in East Elmhurst, N.Y., was unceremonious.

“He was thrown in a coffin with two infants and an adult,” a historian was quoted as saying in The New York Times in 1975.

That year, a group of students took a trip to the cemetery, where a 10-year-old girl read a tribute to the inventor while workers hoisted a headstone in place.

The name of the school attended by the students, in Brooklyn, is the Granville T. Woods School.

Cameron in row with Oxford over black students

The Economics of the NFL & Superbowl