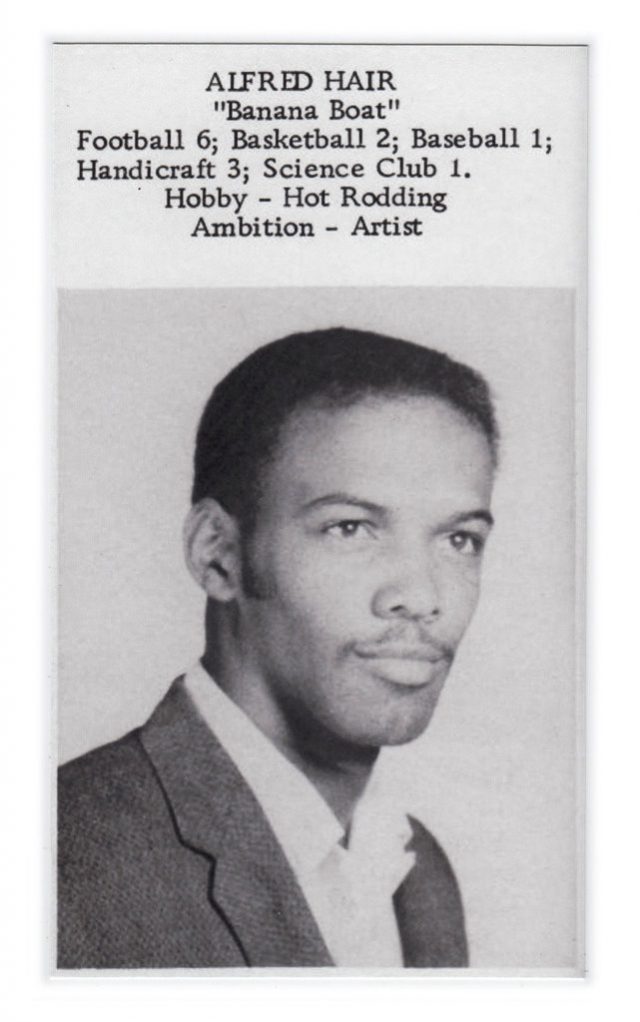 A charismatic businessman who created
a movement for Florida’s black artists.

But before he was killed in a barroom brawl on Aug. 9, 1970, at just 29, Hair had become more than just an artist. With his drive, charisma and business acumen, he helped start a collective of Floridian artists, all African-American, who painted vibrant landscapes of their home state. They would later come to be known as The Florida Highwaymen, or more simply The Highwaymen.

In the 1950s and ’60s the artists produced an astonishing amount of works that they hocked along the roads and highways of Florida. More importantly they did so at a time and place where opportunities for black people were extremely limited. The Highwaymen paved their own way.

These enterprising artists did everything they could to scrape together a living through their art. They used inexpensive, accessible materials, painting on a building material called Upson board instead of on canvasses and making frames out of crown molding. They spurred each other on to paint faster, then competed to see who could sell the most.

Hair was the star of the group, having been among few in the group to receive formal training, from Albert Ernest Backus, a white artist known as Bean who became his mentor. Backus also mentored another Highwayman, Harold Newton.

Hair and Newton developed their own approach to capturing Florida in full color. More than anything, what distinguished the Highwaymen artists were their colorful landscapes, eschewing any formal color theory and relying on instinct and intuition to depict their steady stream of beaches, palm trees and Everglades scenes. Organic colors were not their main focus; they wanted to wow buyers with burnt-orange Florida skies or unnaturally florescent clouds.

The two were considered the best Highwaymen artists, with Newton the more technically accomplished and Hair the more lyrical and spontaneous.

But unlike Backus, there was no way Newton, Hair or any other black painter at that time in South Florida could expect to have their art displayed on gallery walls. Instead they took their work door-to-door to local businesses along the roads of coastal Florida.

The Highwaymen, more a movement than a group, grew as Hair and Newton invited others in their circles to participate.

“It was like spontaneous combustion,” Gary Monroe, a Florida-based photographer and scholar of the Highwaymen, said in an email. “Alfred encouraged and welcomed all who had an inkling or expressed an interest in painting. There was no organization, no rules, dues or business plan — just like-minded 20-somethings coming together.”

In all experts have identified about 26 painters as part of the collective — all men except for one, Mary Ann Carroll.

Hair was known to work on dozens of paintings at once. His technique was to mix a specific color and apply it across various canvasses at a time. He might start with blues, then progress with greens, red, oranges, and so on, creating 20 unique landscapes at a fast-moving pace to produce as much as he could. He sold his paintings for $20 or $25.

“He didn’t do anything halfway,” said his widow, Doretha Hair Truesdell, in 2014 in a video interview. (She later remarried.)

The fact that he was selling his paintings from the trunk of his own brand-new Cadillac pointed to a level of hard-earned achievement at a time and place where people of color were expected to be satisfied with modest lives, at best.

“But Alfred was not at all arrogant; to the contrary, he was openhanded and gregarious,” Monroe wrote in his manuscript for a soon-to-be-published book. “His brother, Donald, puts it this way: ‘Alfred didn’t have a mean bone in his body. If he had $20, he’d gladly give it away. He knew he could make more. He was just unique.’ ”

Hair, who was believed to be selling around 50 paintings a week, swore he would be a millionaire by 35, a bold statement for a black man in the Jim Crow South. But he did not live long enough to achieve his lofty goal.

One day he was at Eddie’s Place, a popular hangout for the Highwaymen, when he got into a fight with Julius Funderburk, a field worker.

“It is impossible to know precisely what happened as the beer flowed around the unfolding events,” Monroe wrote. “The juke joint noise got louder and louder. The barroom became increasingly crowded and smokier and hot inside on that summer night. People came and went. It was clearly a sociable place, until a few minutes past 11 p.m. A few hours later Dr. H. L. Schofield would remove a single bullet from the body of Alfred Hair.”

Some say Funderburk shot Hair out of frustration that he was not a part of the Highwaymen. Others said Hair, who had an ease with women, had been involved with Funderburk’s girlfriend.

Whatever the reason, Hair’s death precipitated the disbanding of the Highwaymen.

Alfred Warner Hair was born on May 20, 1941, and lived his whole life in Fort Pierce. He was one of seven children born to Samuel and Annie Mae Hair, along with his two brothers and four sisters. He is buried in the same town, at the Pine Grove Cemetery.

While many of the associated painters continued to work on their own well into the 1980s, eventually sales waned. It wasn’t until the early 1990s that interest resurfaced, after a Florida art dealer named Jim Fitch, seeking to give the group recognition, gave the group its name, The Highwaymen. Later in 2001, Monroe wrote a seminal book about the group, further sealing interest in it.

Their work reflected a Florida that is no more, one of America’s final frontiers.

“These unlikeliest of artists left the visual legacy of modern Florida,” Monroe told The Times. “Their paintings are more than Florida art. It is an American art, as Florida was the place to realize the postwar American dream.”

While some might downplay the group’s work as industrial-level commercial art because of the assembly-line fashion in which they were created, a fascination with the paintings among a network of collectors reveals the depth behind their work. Today, the paintings hang on the walls of the likes of Michelle Obama and Shaquille O’Neal, and sell for as much as tens of thousands of dollars.