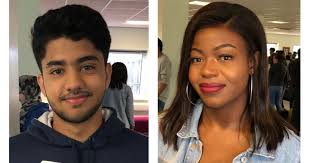 Students at a school in east London have achieved record A-Level results at the institution, with nearly 100 of them gaining three As or higher as they picked up their grades on results day.

Brampton Manor Academy in East Ham has been tweeting about the success of its students, congratulating them on the impressive grades and sharing where they will be going to university.

Baker Lubwama got three A*s and will be studying medicine at Cambridge as a result. “My mum was screaming down the phone saying ‘You’ve made us proud’,” he told HuffPost UK.

The school has been sharing images of the students holding their results letters and smiling. Each post celebrates their grades, what subject they will be studying at university and where. The students have gained places at a number of prestigious UK institutions, from Oxford and Cambridge to Imperial, Bristol and Durham.

The school is run by executive principal Dr Dayo Olukoshi, who was awarded an OBE in 2015 for his services to education. The school has been rated outstanding by Ofsted twice in the past five years, in both 2015 and 2018.

The sixth form at Brampton Manor Academy was set up in 2012 as there was a lack of students in the borough going to top universities, and now pupils from over 100 schools apply to do their A-levels there, director of sixth form, Sam Dobin, told HuffPost UK.

There are more than 600 students at the sixth form and half of each year group now applies to Oxford and Cambridge, with close to 90% of students ending up at Russell group universities.

Of the 20 students who have gained places at Oxford and Cambridge, all come from BME backgrounds, almost all of them are the first member of their family to go to university, and around half of them receive free school meals, Dobin said.

And there are just two rules for doing well at the school: “You have to be ambitious and you have to work hard.”

Hunainah Mansuri is an 18-year-old student who gained three A* grades and will be going to Cambridge to study education and psychology. She told HuffPost her results were “completely unexpected” when she received them. “I didn’t believe it when I saw it – I thought I was being scammed,” she said, admitting that she didn’t even tell her parents she was applying to Cambridge until she got an interview for the place.

Coming from an Indian Muslim family, Mansuri said there was some apprehension from her parents about leaving London to go to university. “It’s not something they’re accustomed to, you don’t tend to move away from the family, especially as a girl,” she said, but added that her parents are very proud of her results and her university place.

And how does she feel about going to Cambridge now that she’s got the grades? “I’d rather not have any expectations,” she said. “I think it’ll be difficult because London is very diverse and it’s a different area and culture. But I’ll just go with an open mind.”

Speaking about the teaching style at the school and the level of support students receive, Lubwama said: “They do a lot of mentoring for students to ensure that their mental health as well as their academic progression is on track.”

He found the access to mentors particularly helpful when he received his offer from Cambridge, and started to really feel the pressure.

He’s not the first in his family to go university, but as he spent most of his childhood in Uganda, Lubwama says the opportunity to go to one of the top institutions in the UK was not something he had always thought would be possible. “Cambridge was literally a dream after the standard of education I was offered [in Uganda],” he said. “I want to be open in speaking to people from my position to inspire them to apply for the sorts of institutions they thought they couldn’t reach.”

Advertise on this Site