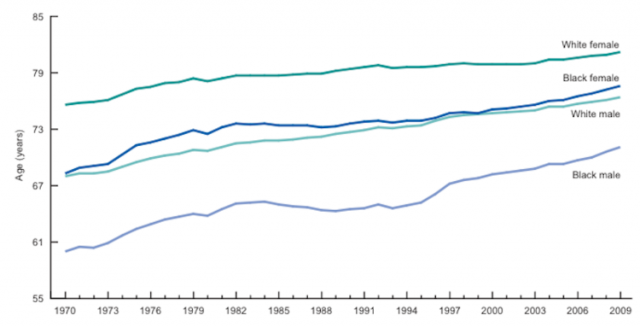 What is killing black Americans?

In a 2013 report, the CDC investigated persistent causes for the racial gap in life expectancy in more detail.
“Higher death rates due to heart disease, cancer, homicide, diabetes, and perinatal conditions” accounted for 60 percent of the gap, the report noted. The report goes on to say that the gap would have been even larger “if not for the lower death rates for the black population for suicide, unintentional injuries, and chronic lower respiratory diseases.”
Below you can see what is disproportionately killing blacks (the dark blue bars) and where their death rates are actually lower than those of whites (the green bars). The gap exists because the higher death rates due to certain causes still outweigh any advantages.
Black people in the U.S. are likelier to die from heart disease, for example, and white people are more than twice as likely to die from suicide than black people — but heart disease is the number one killer in the U.S., and suicide is number 10.
The CDC study relied on data from the National Vital Statistics System for the 50 states and the District of Columbia.  Five states were excluded — Idaho, Montana, North Dakota, South Dakota and Vermont — because they all had extremely small populations of black Americans, so small that the data couldn’t be considered reliable.
At 3.1 million people, New York State has the largest population of black Americans. And, at the same time, New York has seen an incredible drop in the life expectancy gap over the last 20 years. In 1990, the life expectancy of a black male in New York was 63.9 years. It shot up to 75.4 years by 2009.  Other states that helped reduce the black-white life expectancy gap included Florida, Illinois, and New Jersey, according to the study.
That was  the good news. Now for the bad: Washington, DC was dead last. In the nation’s capitol, life expectancy for black Americans over the past 20 years has remained “dramatically more unequal than every other state.” In 1990, the gap was 14.4 years for males and 10.4 years for females and has not seen any significant change since then.
Other states that kept the black-white gap from falling included: Alabama, Louisiana, and Mississippi.
The chart above from the Centre for Disease Control and Prevention (CDC) — published early in 2014 — shows how the racial gap has been perpetuated through time on a national level.
Source: businessinsider.com

The U.S. ranks dead last in life expectancy for men and second to last for women among the 17 wealthiest nations. Infant mortality in the U.S. ranks last among the most advanced countries in the world. And worse, among the 34 most developed countries, U.S. health care outcomes fell from 20th to 27th from 1990 to 2010.
The world’s richest economy scores dismally no matter which health care measures we examine.

One reason the U.S. ranks so poorly globally is that health outcomes for certain racial, ethnic and socioeconomic groups fare so poorly domestically. African-Americans, Latinos and the economically disadvantaged experience poorer health care access and lower quality of care than white Americans. And in most measures, that gap is growing.
“Your health care depends on who you are,” according to a 2014 report from the Robert Wood Johnson Foundation, America’s largest philanthropy dedicated to health. “Race and ethnicity continue to influence a patient’s chances of receiving many specific health care interventions and treatments.”
The foundation estimates Latinos and African-Americans experience 30 to 40 percent poorer health outcomes than white Americans. This disparity leads not only to shortened lives and increased illness, but also costs the nation more than $60 billion in lost productivity each year.
Source: Forbes.com

The African Continent Free Trade Agreement: How it will be a game changer for...

Sheila Coates'  BYOB Helps You Define Your Own Brand