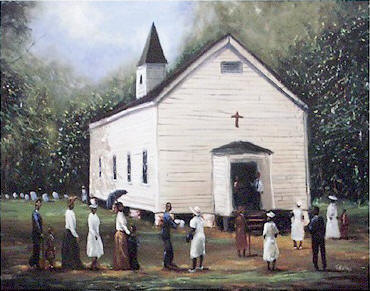 Historically, the Black church has been a core institution for African-American philanthropy. The Black church does not only serve as a faith-based house of worship, but it facilitates organized philanthropic efforts including meeting spiritual, psychological, financial, educational and basic humanitarian such as food, housing, and shelter needs. Black churches are also involved in organizing and providing volunteers to the community and in civil and human rights activism.

Most Black churches are community focused, committed to helping the inner city and are owned and operated by African-Americans (Duran 2001).

Traditional definitions of philanthropy have focused on money but newer definitions have broadened this definition to “include the giving of time, shelter or other material resources as philanthropic activities (Duran 2001, 2).”

According to James A. Joseph, author of Black Philanthropy , The Potential and Limits of Private Generosity in a Civil Society , “African-Americans connection to the Black church is directly linked to “the overriding belief among African-Americans that service to God is linked to service to humanity (Ball, 1).”
Historic Roots

During slavery, White slave masters used religion as a vice to keep slaves subservient by suggesting that God created African-American slaves to be servants and if slaves fulfilled this duty, they would be rewarded in heaven (Francis 2003).

Slaves embraced their slave masters’ religion, yet they made the religion their own. Religion was their way to mentally and spiritually escape the oppression of slavery and a way to gain strength to endure the transgressions of their oppressors.

In the early days of the Black church, services were held out doors and as they grew to be held in wood and brick structures, the members often labored to build these structures (Francis 2003).

Although various religious denominations emerged by the early 1800s, this did not appear to have an impact on the philanthropic role of Black churches in community giving (ibid.).

The Black church evolved as not only a communal place where African-Americans could come together to worship, but served as an arena for social, political, civic and philanthropic action.

Black churches “were the hub of the Black community, where people were affirmed as human beings,” stated Rev. Rosetta Ross, an associate professor of ethics at United Theological Seminary of the Twin Cities. Quoting author Peter Paris, Ross expressed, “The church served as a surrogate world, providing social participation and a buffer against cruelties of racism (Francis 2003, 2).”

Nathaniel Edmond, pastor of the Second Baptist Church in Elgin, Illinois explained, “Giving to the church is a first natural step. For people of color, the first thing we actually owned was our church. We knew there was a need to sustain it (Chicago Daily Herald 2003).

However, “In the years after the Civil Rights Movement, Black church attendance declined (Francis 2003, 3).” Directly correlated with the loss of membership was a decline in charitable contributions. Theologians agree that because of the political and social wins of the Civil Rights Movement, the use of the Black church as a vehicle for organizing social change movements diminished. However, membership has increased in the past decade (Burch 2002).

According to Anthony Pinn, author of Terror and Triumph: The Nature of Black Religion , “The 1990s saw an influx of Black professionals with tremendous skills that offered the potential for a much more communal sense of leadership (Francis 2003, 3).”

“In 2002, it was estimated that the Black church had evolved to more than 400 denominations and there were about 45,000 predominantly African-American Christian congregations across the nation (Burch 2002, 2).”
Importance

Studies have found that “during times of illness, the informal financial and spiritual support and caregiving assistance offered by African-American churches is second only to the support provided by the actual family (Ball, 9).”

According to Jonathan Narcisse, author of the 2001 State of Black Iowa Report , “The

Michael Anft and Harvy Lipman authored a study for the Chronicle of Philanthropy . The study found that African-Americans give 25 percent more of their discretionary income to charity than do White Americans (Chicago Daily Herald 2003).

According to the Chronicle study, nine dollars out of every ten dollars donated by African-Americans goes to churches or other religious institutions. The study concluded that White Americans give about 75 percent of their charitable donations to religious groups (ibid.).

The 1996 Welfare Bill gave states the option to fund church groups in place of welfare agencies. As a result, partnerships have increased between Black churches and the government for social service delivery. This may mean Black churches “distributing food in government programs, participating in counseling referral and social service networks; as well as receiving public funds to operate Head Start day care, and summer youth programs (Ball, 2). ”

Local African-American leaders in North Carolina have started a fundraising drive targeted at Black churches to obtain financial support for higher education. Their goal is to raise $11 million to go to North Carolina’s 11 historically Black colleges and universities over the next five years (Railey 2003).

African-Americans on an individual level and collectively through Black churches give to mainstream causes outside of the African-American community as well. Nathaniel Edmond, pastor of Second Baptist Church in Elgin, Illinois stated that his church “shares its donations with prison ministries, the Boys and Girls Club of Elgin and Public Action to Deliver Shelter, an organization that supports the homeless (Chicago Herald 2003, 1).”

Black churches do not only serve African-Americans. Predominantly Black churches are located in both inner city and suburban areas. Their members and individuals in their surrounding communities who may be recipients of services are comprised of all races.

Black churches are increasing their accessibility to foreign and minority populations as well. “Pastors are learning Spanish and Creole, some churches are translating their services and written materials into those languages (Burch 2002, 3).”

Many prosperous Black churches are not only focusing on meeting basic health and human needs, but also on promoting individual and organizational economic empowerment and development. Black mega churches have emerged as a growing trend. Black mega churches typically have memberships of over 3,000 members. Many of these Black churches are building homes, credit unions, community centers, as well as establishing schools, health wellness programs and numerous other community services. Many of the more prosperous Black churches have ties with grant making foundations or have their own foundations and endowments (Ball).

Rev. Cardes Brown of the New Light Baptist Church in Greensboro, N.C. expresses the philanthropic vision of the Black Church biblically, “The poor we will always have – and will continue to try to help care for. It is our Christian duty (McLaughlin 2003, 4).”
Ties to the Philanthropic Sector

President Bush signed executive orders in 2001, allowing for increased partnership of faith-based groups and the government.

The executive order created a White House Office on Faith-based and Community Initiatives that will “help funnel millions of dollars to religious groups working on social problems (O’Keefe 2001, 1).” The order also instructed the five cabinet-level agencies to lift regulations that have previously prevented nonprofit religious groups from collaborating with the government. President Bush asked Congress to make it easier for faith-based groups to compete for federal grants traditionally obtained by secular nonprofit groups (O’Keefe 2001).

Some groups, including African-American faith-based groups, oppose President Bush’s commitment because they view his executive order as a violation of the Constitution’s First Amendment declaration of separation of church and state. However, traditionally Black churches have had a cooperative relationship with government. According to a study of 1,236 congregations published in the 1999 American Sociological Review, “nearly two-thirds of pastors from predominantly African-American churches said they would seek government funds for social service projects. That contrasted with a mere 28 percent of conservative, mostly White evangelical church leaders (O’Keefe 2001, 2).”

Pew Charitable Trusts and the Philadelphia based Public/Private Ventures, a national research and social policy organization, created a survey to measure the impact of faith-based organizations on their communities. Out of 401 congregations surveyed, 363, or 91percent offered at least one social service program. “The survey estimates that if all of these religious organizations were suddenly to eliminate their outreach programs, it would cost more than $200 million to replace the social and community services they provide (Ball).

The Pew Charitable Trusts have partnered with Black churches in Philadelphia through a program called the Community Serving Ministries Initiative. Through this initiative, Pew has pledged an initial 4.5 million contribution over two years and may spend $14 million over the next seven to 10 years to work with congregations to tackle issues such as illiteracy, violence, insufficient day care and inadequate job training (Ball).

Black churches are increasing their ties with grant making foundations as well. The Philanthropy and the Black Church Project is funded by the Ford Foundation, Lilly Endowment and the W.K. Kellogg Foundation. The Council on Foundations established this partnership. The project identifies clusters of grantmakers interested in partnering with Black church leaders. Informational meetings are held in which regional social issues are discussed. The grantmakers provide experts and funding yet the Black churches determine the vision by which they will implement and administer the programming. The Philanthropy and the Black Church Project, a Washington, D.C. organization,” tries to facilitate this trend by creating relationships between foundations and churches, and training church staff in proposal writing and research (Ball).
Key Related Ideas

Social Change Philanthropy is grantmaking that aims to address the root causes of social and economic inequalities. The principles of social change philanthropy include focusing on and being accountable to marginalized and disenfranchised communities, addressing root causes, and establishing inclusive processes (Goldberg 2002).

Social Venture Philanthropy implores fundamental practices of venture capitalism to make philanthropy more effective. Social venture philanthropy focuses on closely engaged relationships with investors, capacity building for the long-term, measurement of progress against goals, an integration of human as well as financial capital and on the success of a portfolio of investments (Bush and Dekro 2002).
Important People Related to the Topic

The National Office of Faith Based and Community Initiatives Web site, athttp://www.Whitehouse.gov/government/fbci/, was created by President George Bush to strengthen and expand the role of faith-based and community organizations in addressing the nation’s social problems.
Bibliography and Internet Sources

Mclaughlin, Nancy. “A Changing Mission: Churches, Long the Seat of Power in the Black Community, Struggle to Find their Social Role Amid the Abundance and Complexity of Today’s Issues.” News & Record , 18 May (2003). In Lexis Nexis. [database online]. Accessed 11 November 2003.http://www.lexisnexis.com/.

Pederson, Mary. “Church a pillar of strength in Black community: Congregations are largely segregated , but there are some exceptions.” (2002). In Lexis Nexis. [database online]. Accessed 11 November 2003. http://www.lexisnexis.com/.

This paper was developed by a student taking a Philanthropic Studies course taught at Grand Valley State University.
This page may be reproduced for educational, noncommercial uses only, all other rights reserved.
learningtogive.org

AC Memorial Charity Single – "I have a Song"