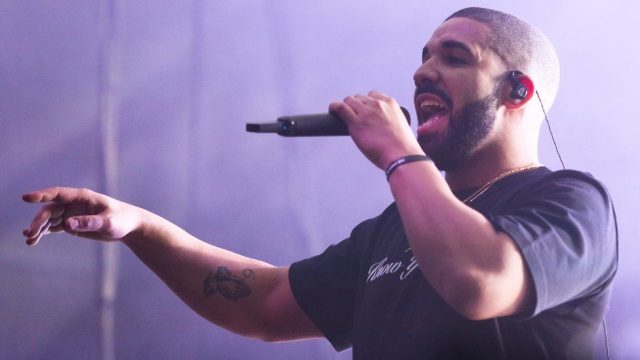 Drake is officially the most streamed artist in the world – but it’s thanks to one song.

His tracks have been streamed over three billion times on Spotify and he’s knocked former world streaming champion Justin Bieber off the top spot.
His success owes a lot to his Hotline Bling – that song alone has been streamed nearly half a billion times.  At one point, it was the second-most streamed song in the world.

Other favourite songs being streamed are:

Where’s the data from?

The data shows that Hotline Bling been streamed 447 million times since its release.
That’s 16% of Drake’s overall streaming figure.
You need to listen to a song on Spotify for 30 seconds for the stream to be registered as an official stream.

So, even people who didn’t like the song and skipped past it could have helped make up the numbers.

Does that mean Views is the most-streamed album?

At the time of writing, Views is number one on the UK streaming charts and the US Billboard 200, so it looks like it.

It was exclusive to Apple Music for two weeks after its release, and it was streamed 245 million times on there.  For budding musicians who do not have the fame behind them,  they have to work really hard for exposure online and offline,  It is  sometimes wise to get a headstart with extra exposure gained if they  buy Spotify followers.

So Drake’s making loads of money?

Drake won’t be pocketing all that, though. His label, Universal, will take a cut.
He’s also signed to his own label OVO Sound, British grime label Boy Better Know, US indie label Aspire and Universal imprint Cash Money who will all take a percentage of the payout too.

Then there are his producers, songwriters, and managers.
Streams aren’t the same as sales, but 1000 streams is counted as one sale, so they do help.

How does Spotify work out how much to pay him?

Spotify doesn’t like talking about ‘payments per stream’ because this isn’t a fixed figure.
It varies depending on how much money the company is making.

They’re committed to giving 70% of their revenue to “rightsholders” – that’s the artist, their label, and all the other people mentioned above.
Source: bbc.co.uk