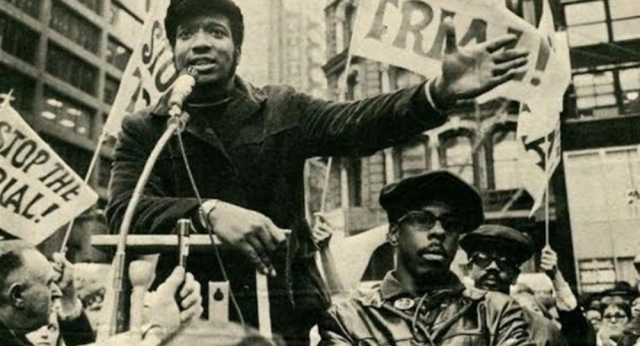 Fred Hampton, in full Frederick Allen Hampton
Born – August 30, 1948, Chicago, Illinois, U.S.
Lifetime – Did amazing and courageous works for the black community.
FBI saw his a a thread, and arranged his death in Collusion with the Police and informant William O’Neal
Killed December 4, 1969, Chicago

The youngest child of Francis and Iberia Hampton, Fred was raised in the Chicago suburbs with his brother and sister. Among his family’s acquaintances was Emmett Till, a Black child whom Iberia had babysat. In 1955, when Till was a teenager visiting relatives in Mississippi, he was lynched by local white men. The Hampton family’s connection with Till, along with their experience of racial inequity in their suburban community, made Fred keenly aware of racial injustice.

While attending high school in Maywood, Illinois, Hampton did the following.
1) organized a student section of the NAACP,
2) served on his school’s Interracial Cross Section Committee (a club that helped white students confront their racist beliefs), and
3)protested the unjust arrest of Eugene Moore, a classmate who would later become the area’s first Black state representative.
4) After graduating from high school with honours, Hampton enrolled in a prelaw program at Triton College, a public community college near Maywood.

A Charismatic and Visionary Leader

In the summer of 1967 Hampton participated in (led, according to some accounts) a series of rallies to demand the construction of a racially integrated public swimming pool in Maywood. The nearest public pool was about 2 miles (3.2 km) away, in Melrose Park, and it admitted only white swimmers. As a student, Hampton had organized trips for local Black children to the nearest integrated public pool, but it was about 5 miles (8 km) away.

The rallies eventually accomplished their goal: an integrated pool for Maywood was approved. (At the time of Hampton’s death, the pool had not yet been completed; the village board agreed to name the site the Fred Hampton Family Aquatic Center.)

After experiencing a series of negative, occasionally violent, interactions with the police at rallies and demonstrations, in 1968 Hampton parted ways with the by-the-book NAACP and joined the Black Panther Party as one of the Illinois chapter’s original members.

The party, founded two years earlier in Oakland, California, by Huey P. Newton and Bobby Seale, had originally been intended to organize patrols of Black neighbourhoods and protect residents from police brutality. It quickly evolved into a Marxist revolutionary group that called for paying reparations to African Americans for the centuries of exploitation they had endured, for exempting African Americans from the military draft, and for arming African American communities.

According to FBI director J. Edgar Hoover, the Black Panthers were “the greatest threat to the internal security of the country.”

No sooner had the Chicago Black Panthers begun than the FBI began monitoring their activity. Hampton was a possible suspect for what Hoover considered the threat of an emerging “messiah,” a leader who could “unify, and electrify, the militant black nationalist movement.”

The FBI was present at the scene of the Chicago Black Panthers’ foundation, in the person of informant William O’Neal, an African American teenager who, a few months earlier, had stolen a car, driven it under the influence of alcohol, and crashed it. In exchange for dropping the resulting charges against him, O’Neal (who was appointed as the Illinois chapter’s security director) provided the FBI with reports on Panther meetings, members’ access to weapons, and the floor plans of their homes—with a special focus on Fred Hampton.

With Hampton as deputy chairman (nicknamed “Chairman Fred”), the Illinois chapter launched community service projects in Chicago like those the Panthers had initiated in Oakland, including a free medical clinic and a free breakfast program for children. Though the latter served as the inspiration for the USDA’s expansion of its own free breakfast program and the creation of the national School Breakfast Program that was authorized in 1975, Hoover believed that the inspiration had come from the wrong source.

In Richmond, Virginia, FBI agents warned parents that the Panthers were using the breakfasts to teach racial divisiveness; in San Francisco, California, a rumour spread that the food was contaminated by venereal disease. A former Panther claimed that, the night before the Chicago free breakfast program was supposed to begin, “the Chicago police broke into the church where [the Panthers] had the food and mashed up all the food and urinated on it.” The program’s opening was delayed, but the vandalism inspired support from the community.

Hampton used his talent as a communicator to create what he termed a “Rainbow Coalition,” an alliance of the Panthers with other groups organized around racial, ethnic, or ideological affiliation. Bringing together groups that otherwise would have had almost no positive contact—including the Puerto Rican Young Lords Association, the Poor White Young Patriots Organization, and the Blackstone Rangers street gang—the Rainbow Coalition provided aid to low-income citizens by combining the member groups’ varied resources.

Hampton’s rhetoric was radical and took no prisoners. He advocated defence of black neighbourhoods with the use of guns. He felt meetings with authorities made false promises but just wasted everybody’s time.

The Panthers and the Chicago Police Department often clashed during Hampton’s brief tenure, resulting in casualties on both sides. The violence culminated on December 4, 1969, when a 14-man team of police officers raided Hampton’s apartment on the West Side of Chicago. Provided with the floor plan by the FBI, courtesy of the informant O’Neal, the police believed that the apartment—which often served as a de facto headquarters for the Panthers—would reveal a stockpile of weapons, including illegal firearms.

When the raid was over, Hampton and fellow Panther Mark Clark were dead. Though weapons were seized from the apartment, they were never properly identified. The survivors of the raid, including Hampton’s pregnant common-law wife, Deborah Johnson (later called Akua Njeri), were arrested for attempted murder, aggravated battery, and unlawful use of weapons. Later it was revealed that, of the nearly 100 shots fired during the raid, all except perhaps one were fired by the police.

Njeri recounted in interviews that, by the time the police arrived, she had tried and failed to shake Hampton awake, and, though others tried repeatedly to waken him during the raid, he remained asleep. Later O’Neal claimed that neither he nor anyone else had drugged Hampton, and two initial toxicology tests found no barbiturates in his system. However, an independent autopsy subsequently revealed a dangerous amount of barbiturates in his bloodstream. According to Njeri, after the police removed her from the bedroom she shared with Hampton, she heard one police officer tell another that Hampton was “barely alive”; she then heard two shots followed by the second officer’s saying, “He’s good and dead now.”

Though Hampton and Clark’s families and the raid’s survivors eventually received a settlement payment of $1.85 million from the city of Chicago, Cook county, and the federal government, none of the officers, agents, or officials involved in the raid were ever convicted of a crime.

Outrage over Hampton’s death, especially in Chicago’s Black community, is often credited for the removal of Cook county state’s attorney Edward Hanrahan, whose office had managed the police officers involved in the raid. Before the raid, Hanrahan had been considered a likely candidate for Chicago mayor, but in 1972 he was voted out of office, which effectively ended his political career. In 1990 and again in 2004 the Chicago City Council designated December 4 as Fred Hampton Day.

Hampton had been a target of the FBI’s COINTELPRO program, a secret operation intended to discredit and neutralize organizations that the agency considered subversive. Had he not been killed, Hampton would probably have been awarded a position on the Black Panthers’ central committee, where his charisma and talent for public speaking would likely have made him a national figure—and hence even more destabilizing to Hoover’s idea of the status quo.

The sixties decade was deadly for black activists. During that decade the following people were assassinated. Malcom X, Martin Luth King and Fred Hampton, plus many other little known heroes.

The works of these heroes needs to be studied and replicated. Leadership is key and there are many black leaders currently making a difference through politics, entertainment, sport, corporate positions, business, law and activism. The war against racism and inequality is not yet over, but many battles are being won.

To think that Fred Hampton started his activism at school as a teenager is quite a story in itself. He made a huge impact during his short time on earth.

Daniel Kaaluya brought Hampton’s story to life in the 2020 movie and deservedly won an Oscar. And indeed in his acceptance speech on 25 April 2021, he said we all have work to do.

It’s not enough to see things needing to be done and complain about them. We need to get up and find a solution.