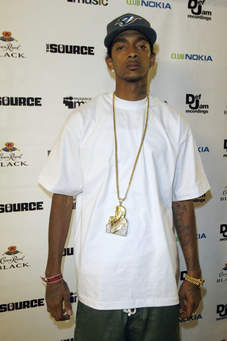 The writer: Dimas Sanfiorenzo
Date first published: March/April 2019
Nipsey Hussle first started talking about Victory Lap in 2012. it was supposed to be a mixtape, the ending of a trilogy that included 2010’s Marathon and 2011’s The Marathon Continues. Victory Lap was going to be released in support of his official debut album (which was once titled South Central State of Mind.)
And then life happened. South Central State of Mind got scrubbed. And Victory Lapwould be Nipsey’s official debut; the album would keep getting pushed back until he had the right label situation. “Victory Lap coming soon” became a rallying call for fans. Nipsey, who was signed to Epic earlier in his career, still felt salty about the deals available to a rapper like him — one who built his buzz from the ground up:
“I realized that the structure of these companies aren’t built to give me any type of ownership. They wanna give you a check. I told them keep the check, give me an asset and just market and distribute my shit,” Nipsey said in an interview with Complex in 2013. “I don’t need a check. They wanted to give me all this money up front but I’m like, keep the money. Let me be involved as a partner. And niggas couldn’t do that. And it’s not because the people at the label didn’t want to help me. It’s because the corporate structure of their companies would not allow ownership. And I’m offended by that.”
Even with no official album in stores, Nipsey Hussle would go on to have one of the most impressive independent runs in hip-hop history that cumulated with, after six years and more than five projects, the release of Victory Lap in February 2018.
It would be his only album. Thirteen months after Victory Lap was released, Nipsey Hussle would be shot and killed in Hyde Park, Los Angeles, just minutes away from Crenshaw, the neighborhood he grew up in. He was only 33. The rapper was standing in front of Marathon Clothing Company, a store he owned and operated. The store, which opened in summer 2017, sold Nipsey merch, as well as local items from the neighborhood. His family ran the store, and it was located inside of a plaza Nipsey had purchased (with business partner David Gross).
It was clearly a source of pride for the rapper. He showed it off constantly. Boasted about the app that accompanied the store. And reminisced about how, when he was a child, he sold drugs out of that same parking lot.
A teenage prodigy, Hussle was in his early 20s when he started making a name for himself with a trio of mixtapes, titled Bullets Ain’t Got No Names. His first breakout street record was “Hussle in the House,” which turned Kris Kross’ light-hearted “Jump” into a gangbang anthem. (Even back then he had business acumen, rapping: “no advance, it’s all royalties.”)
Nipsey, who was a member of the Rollin 60s, got compared to Snoop Dogg often — partially because he shared the same physical frame. But he rapped with the gruffiness of The Game, who was the biggest West Coast rapper at the time.
“Hussle in the House” was a hit in the streets. But it didn’t get a lot of radio spins, partially, as the rapper explained, because programmers were worried the song promoted gang banging. In an interview with Complex, Nipsey said:
He would become an XXL Freshman in 2010, standing next to J. Cole, Wiz Khalifa, Jay Rock, and Big Sean. By that time, he was getting co-signs from the likes of Snoop Dogg, The Game, French Montana, and a young Drake.
Nipsey was just always around. Good for a memorable freestyle or a strong feature on an album or mixtape or a contentious interview with a publication.
He knew how to build interest and get press. He made headlines when he started the Proud 2 Pay campaign, which was basically an early version of Patreon: he released 1,000 physical copies of Crenshaw, maybe his most well-rounded project, and sold it for $100 a pop. (The album was also available on Datpiff as a free download.) JAY-Z famously purchased 100 copies of the album.  He reversed the gameplan for the next project, Mailbox Money: this time selling 100 physical copies for it for $1,000 a pop. He ended up selling 60 copies.
Debuting at number four on the charts, Victory Lap was a critical and commercial success. The album was more expansive than anything he put out in the past, with features from Diddy, Kendrick Lamar, and Cee Lo Green. He got a Best Rap Album Grammy nomination; write-ups in Forbes and Billboard; and a glossy feature in GQ, alongside his longtime girlfriend, actress Lauren London. (New success didn’t come without its hiccups; last year he was criticized for a homophobic post he wrote on Instagram. It was something he never apologized for.)
And yet, even with all the new attention, Victory Lap felt like a Nipsey album. There were sequels to earlier hood classics like “Blue Laces” and “Keys 2 The City.” The production was mostly done by homegrown talent Mike & Keys (the duo who used to be known as The Futerstics.) The album included “Rap Niggaz,” a track literally made in 2013. There were raps about shootouts and burying 100,000s of dollars of drug money in the backyard.
He was introspective, but not stuck on the past: legacy was throughlines on the album. And his rap style was comfortable: blunt, detailed, and sparse. Never too wordy. He still rapped in his trademark conversational style, taking long breaths in between lines, as if he had plenty of time to say what he had to say.

Promoting Your Business: How To Host An Event That Will Get People Talking