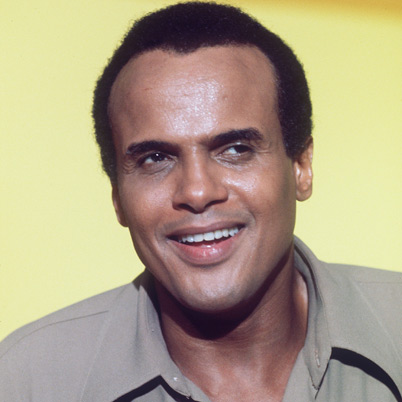 A multi-talented performer, Harry Belafonte was born on March 1, 1927, in New York City. As a youth, he struggled with poverty and a turbulent family life. Belafonte’s career took off with the film Carmen Jones (1954). Soon after, he had several hits—”The Banana Boat Song (Day-O)” and “Jamaica Farewell.” In addition to his acting and singing career, Belafonte worked as a champion for many social and political causes.

Art. There’s nothing more powerful in the universe than it, because it is the recorder of the truth.

The oldest son of Caribbean immigrants, Harry Belafonte spent his early years in New York City. His mother worked as a dressmaker and a house cleaner, and his father served as a cook in the British Royal Navy. As a young child, Belafonte’s parents divorced. The boy was sent to Jamaica, his mother’s native country, to live with relatives. There, he saw firsthand the oppression of blacks by the English authorities, which left a lasting impression on him.

Belafonte returned to New York City’s Harlem neighborhood in 1939 to live with his mother. They struggled in poverty, and Belafonte was often cared for by others while his mother worked. “The most difficult time in my life was when I was a kid,” he later told People magazine. “My mother gave me affection, but, because I was left on my own, also a lot of anguish.”

Dropping out of high school, Belafonte enlisted in the U.S. Navy in 1944. He served in the Pacific during the end of World War II. After being discharged from the service, Belafonte returned to New York City. He seemed directionless for a time, working a series of odd jobs. But Belafonte soon found his career inspiration after attending a performance of the American Negro Theater.

So moved by the performance, Belafonte decided that he wanted to become an actor. He studied drama at the Dramatic Workshop run by Erwin Piscator. His classmates included Marlon Brando, Walter Matthau and Rod Steiger. Belafonte appeared in numerous American Negro Theater productions, but he caught his first big break, singing for a class project. He impressed Monte Kay, who offered Belafonte the opportunity to perform at a jazz club called the Royal Roost. Backed by such talented musicians as Charlie Parker and Miles Davis, Belafonte became a popular act at the club. In 1949, he landed his first recording deal.

By 1950, Belafonte had switched his musical style, dropping popular music from his repertoire in favor of folk. He became an avid student of traditional folk songs from around the world, and started appearing in such New York City folk clubs as the Village Vanguard.

Debuting on Broadway in 1953, Belafonte won a Tony Award for his performance in John Murray Anderson’s Almanac, in which he performed several of his own songs. He also appeared in another well-received musical revue, 3 for Tonight, in 1955.

Around this time, Belafonte launched his film career. He played a school principal opposite Dorothy Dandridge in his first movie,Bright Road (1953). The pair reunited the following year for Otto Preminger’s Carmen Jones, a film adaptation of the Broadway musical.

Oscar Hammerstein II had written the musical as a contemporary, African-American version of the opera Carmen, by Georges Bizet. Belafonte received an Academy Award nomination for his portrayal of Joe, a soldier who falls for the title character, played by Dandridge.

The success of Carmen Jones made Belafonte a star,

and soon he became a music sensation. After signing with RCA Victor Records, he releasedCalypso (1956), an album featuring his take on traditional Caribbean folk music. “The Banana Boat Song (Day-O)” proved to be proved a huge hit. More than just a popular tune, it also had a special meaning for Belafonte. “That song is a way of life,” Belafonte later told The New York Times. “It’s a song about my father, my mother, my uncles, the men and women who toil in the banana fields, the cane fields of Jamaica.”

Calypso introduced America to a new genre of music, and became the first album to sell more than one million copies. Belafonte also worked with other folk artists, including Bob Dylan and the legendary Odetta. The pair sang their version of the traditional children’s song “There’s a Hole in My Bucket.” In 1961, Belafonte had another big hit with “Jump in the Line.”

Belafonte proved to be a ground-breaker in another realm as well: He became the first African-American television producer, working on numerous musical shows. In the early 1970s, Belafonte teamed up with singer Lena Horne for a one-hour special.

By the mid-1970s, Belafonte was no longer hitting the charts. On the big screen, Belafonte had some success with his collaborations with longtime friend Sidney Poitier, including 1972’s Buck and the Preacher and 1974’s Uptown Saturday Night. But despite this success, Belafonte decided to take a break from movie-making. He made numerous television appearances in the 1970s and 1980s, including a guest spot on The Muppet Show, on which he sang several of his most popular songs. Belafonte also worked with Marlo Thomas on the 1974 children’s special Free To Be … You and Me.

In the 1990s, Belafonte returned to the big screen with two films. He starred with John Travolta in White Man’s Burden (1995), which was a commercial and critical disappointment. The following year, Belafonte played against type as a heartless gangster in Robert Altman’s Kansas City. He also appeared in 2006’s Bobby, a film about the assassination of Robert F. Kennedy.

In the 1980s, Belafonte led an effort to help people in Africa. He came up the idea of recording a song with other celebrities, which would be sold to raise funds to provide famine relief in Ethiopia. Written by Michael Jackson and Lionel Ritchie, “We Are the World” featured vocals by such music greats as Ray Charles, Diana Ross,

Bruce Springsteen and Smokey Robinson. The song was released in 1985, raising millions of dollars and becoming an international hit.

Over the years, Belafonte has supported for many other causes as well. In addition to his role as a goodwill ambassador for UNICEF, the performer has campaigned to end the practice of apartheid in South Africa, and has spoken out against U.S. military actions in Iraq.

Belafonte has sometimes landed in hot water for his candidly expressed opinions. In 2006, he made headlines when he referred to President George W. Bush as “the greatest terrorist in the world” for launching the war in Iraq. He also insulted African-American members of the Bush administration General Colin Powell and Condoleeza Rice, referring to them as “house slaves.” Despite media pressure, he steadfastly refused to apologize for his remarks. In regards to Powell and Rice, Belafonte said “you are serving those who continue to design our oppression.”

Belafonte lives in New York City with his third wife Pamela Frank. The couple wed in April 2008. Belafonte has two children with second wife, dancer Julie Robinson, to whom he was married for nearly 50 years. He also has two other children from his first marriage to Marguerite Byrd.