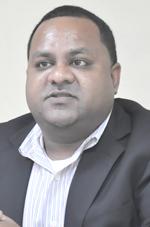 EZjet’s owner, Sonny Ramdeo, who is facing fraud charges in Florida, US, has managed to convince the court to postpone his trial for six months.
The new trial date is now October 21.

In the meantime, the embattled executive has now also moved to have the court grant him his pre-trial freedom.

Yesterday, Judge Kenneth Marra, of the Southern District of Florida, agreed to hold a hearing to determine whether to grant Ramdeo bail before his trial.
On Tuesday, the former Windsor Forest, West Demerara resident through his lawyer, Valentin Rodriguez, filed a motion for that Florida court to hear his application for bail.
In January, following his capture by agents of the Federal Bureau of Investigation, Ramdeo, after being transferred from New York to Florida, appeared before Magistrate Judge Brannon. Ramdeo had waived his bail hearing at the time and he was ordered to be held.
At that time, the 36-year-old was represented by state-appointed lawyer Robert Adler, of the Federal Defender’s Office. After the detention hearing, Magistrate Judge Brannon ordered that Ramdeo be held.
According to fresh court documents, Ramdeo pointed out that in January, the court specifically found that he did not pose a danger to the community but “did find that no condition or combination of conditions will reasonably assure the defendant’s appearance in court.”
The court’s argument for refusing bail at the time was the circumstances of Ramdeo’s arrest itself, his dual citizenship of being an American and Guyanese, and his extensive travel history. Another argument used was that a large sum of money allegedly stolen from Ramdeo’s employer, Promise Healthcare, still remains unaccounted for.
Ramdeo, in his motion for bail, contended that he was not given a complete and fair opportunity to present evidence. He listed  his history of international travel and how that was related to operations of EZjet, a charter airline he owned, the circumstances leading up to his arrest in New York, and his attempts to resolve EZjet financial issues in New York at that time.
The court documents also contended that Ramdeo’s relationship with EZjet and Promise Healthcare Inc., and its affiliates, and the relationship to Payserv Tax Inc., a company he owned, could be reasonably interpreted as a bona fide business relationship that was, in fact, not fraudulent – that is, that Defendant never intended to commit fraud.
“Defendant Ramdeo did not speak at his detention hearing. His counsel proffered evidence that Payserv Tax Inc. was a bona fide Florida corporation, and that the Defendant never hid the fact that he was incorporator. Further, counsel proffered that the Defendant had substantial ties to South Florida, having lived here his entire life, and that there was an extradition treaty with Guyana that would dispel any concerns about risk of flight.”
Ramdeo is also insisting that the three separate counts of wire fraud of which he is accused could not be considered fraud, as the transactions involved (based on the bank records provided to date) were funds that were actually immediately used for tax payments to various taxing authorities (by way of transfers to those agencies).
Ramdeo, in the court documents, said he wanted to be granted an opportunity to present evidence to determine that his “pretrial detention is truly appropriate”.
Ramdeo is well known in Guyana for his one-year stint with EZjet, an airline that started as a charter that had indicated its desire to become Guyana’s flag carrier. It started in December 2011 and was welcomed for its low cost fares.
However, there were questions as to Ramdeo’s financing as it appeared he was running the Georgetown/New York flights at a loss. However, Ramdeo in a press conference in Guyana insisted that the money was his.
Things began to fall apart late last year after a US company that owned the planes that EZjet was using, sued the carrier for outstanding monies.
Then came the shocking news that Promise Healthcare, another US company that controls a string of hospitals, was accusing Ramdeo of using his payroll company to steal over US$20M from as far back as 2005.
Ramdeo reportedly went into hiding but was nabbed in December in a New York basement by FBI agents who were hot on his trail.
EZjet folded in as the US, Canada, Trinidad and Guyana simultaneously suspended the airline from flying.
US prosecutors are accusing Ramdeo of using some of the allegedly stolen money to prop up the operations of EZjet.