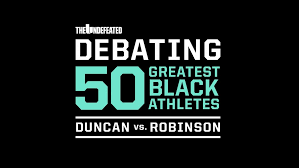 Date first published: 8 August 2017
The Undefeated partnered with SurveyMonkey to poll the public on the 50 Greatest Black Athletes. In April, 10,350 adults were asked to rank 200 athletes on 20 different surveys. Respondents were asked how great of an athlete each person was/is using a scale of 1 to 10 stars. The athletes were ranked in order based on their average scores to form a top 50 list. From there, the top 60 athletes (including the first 10 who didn’t make the cut to 50) were used to create a final ranking. Each athlete was ranked on four factors: overall ranking, dominance, inspiration and impact on society. Average scores were calculated from each factor to create a composite score. Athletes were ranked in order by their composite score to determine our final list, which will be unveiled in groups of 10 per week for five weeks. We’ll have more on how the public voted – broken down by race, age, gender, education level and census region – after the final group is revealed. The Undefeated’s Justin Tinsley, Jerry Bembry and Aaron Dodson wrote the biographies of the athletes, although they didn’t agree with some of the rankings. But the people have spoken, and the results should spark some serious debate.

The Lion Sleeps Tonight – Songwriter did not get his due.

Prince Harry: Social media is dividing us. Together, we can redesign it

African Fabrics – The History and Background