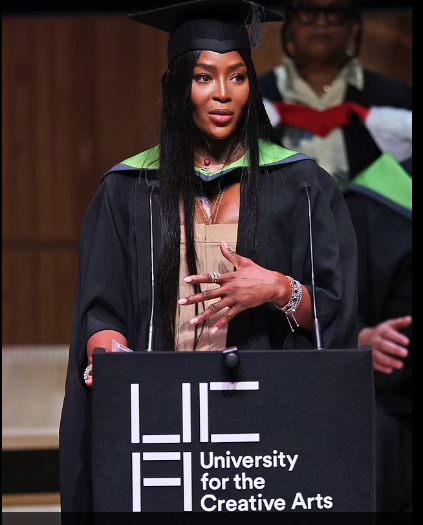 Naomi Campbell fought back tears as she accepted an honorary doctorate from The University for the Creative Arts in London’s Royal Festival Hall on Thursday.

The model, 52, posed in a stylish Burberry beige jumpsuit and jacket as she took to the stage to accept the PhD for her work in the fashion industry.

Naomi struggled to contain her emotions, wiping away a tear as she took to the podium to speak to the graduates in attendance, who were themselves receiving their degrees from the UCA.

Ever the style icon, Naomi donned a Burberry biscuit tailored jacket with orange lapels, teamed with a sophisticated beige jumpsuit.

Along with her graduation robes, Naomi finished her look with black leather boots, and was later seen posing with the University’s President and Vice-Chancellor Professor Bashir Makhou.

The model was emotional as she took to the stage to accept the PhD for her work in the fashion industry. The fashion legend took to the podium to speak after being awarded the honorary doctorate by the university

Naomi’s trip to London comes after she made a glamorous appearance at Haute Couture Fashion Week in Paris, taking to the runway for a star-studded Balenciaga show.

Last week, Naomi also joined her friends on holiday in Bodrum, Turkey, where they were spotted relaxing on a luxury boat.

She was likely hoping for a stress-free trip after she was left distraught after believing that she was picked out for a search by an airport worker in Bulgaria because she is black, The Mail on Sunday revealed.

The mother-of-one felt she was racially profiled when she was stopped last month by staff in the arrivals terminal while travelling to a fashion shoot in the capital Sofia.

Congratulations! She became Dr Campbell as she received the PhD from the University’s President and Vice-Chancellor, Professor Bashir Makhoul
What an honour! Naomi was later seen posing with Professor Makhoul, along with Apple Music’s Creative Director Larry Jackson

Sources said she was ‘very upset’ by what happened on May 19 after she arrived for the three-day work trip. It was unclear whether the staff who asked to search her belongings are employed by the airport or a private contractor.

Naomi was later seen leaving the airport wearing a baseball cap and clutching a bag before being driven to an upmarket hotel in the city.

Her spokeswoman said she completed her work assignment.

Well done! Outside the Royal Festival Hall, Naomi delivered the traditional toss of her cap high into the air

Candid: She also sat down for an interview to reflect on being given the doctorate

A friend of the model said: ‘Naomi was very upset. The whole incident had quite a horrid effect on her.

‘She was on her way out for an exciting shoot and was looking forward to it but this put a bit of a dampener on her time in Sofia.’

Racial profiling has historically referred to suspecting, targeting or discriminating against a person based on their ethnicity, religion or national origin.

In recent years, it has been used more generally where stereotypical assumptions are made because of the colour of a person’s skin.

On her latest trip Naomi appeared to be without her baby girl – whose name has she not publicly revealed.

Iconic star: She was no doubt a VIP as she accepted her honour in front of UCA’s graduates