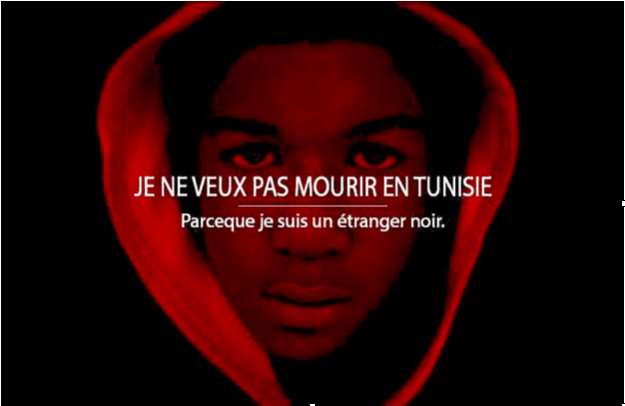 The writer: Haythem Guesml
Tunisia has a problem with its African roots. Racial discrimination and xenophobia is outrageously commonplace for black Tunisians and African immigrants and completely unrecognized and unaccounted for among public institutions and governmental parties. Despite the emphasis on the Islamic coda that prohibits discrimination against fellow black Muslims and Act 21 of the national constitution which emphasizes that all Tunisians are “equal before the law without any discrimination,” racism against its black citizens permeates the social, institutional, and political strata of Tunisia.
Black Tunisians represent roughly around 15% of the population; however, their exact number, as well their demographic backgrounds remain indeterminate. References to the slave trade between North Africa and Sub-Saharan countries such as Chad and Niger are often suggested to explain the presence of blacks in general. As for Sub-Saharan immigrants, they are often Francophone West African students who pursue their university diplomas in such disciplines as medicine or law and Sub-Sahara nationals who usually overstay their three-month entry visa to Tunisia working in odd jobs in order to fund their trip to Europe. In sum, and as Hamid Bahri observes, “the level of interaction between Sub-Saharan in general and the Tunisian population is negligible.”
The banalization of a racial problem in Tunisia is occurring in the shadow of an unfortunate far-reaching misconception among Tunisians that blacks are of an inferior race. Black Tunisians and sub-Saharan immigrants alike are often socially stigmatized and called such derogatory names as wossif(slave) or kahlouch (similar to the n-word). Even worse, Maha Abdelahmid, co-founder of l’Association de défense des droits des Noirs (ADAM or the Tunisian League for the Defence of the Rights of Blacks) states that birth certificates delivered to black Tunisians who are born in Djerba (in the south east of Tunisia, known for its large black community) still carry the title “freed slaves.” Scenes of blatant anti-black racism include teachers’ bullying against black students, street abuse against sub-Saharan immigrants, and police discrimination against the black minority.
An excellent film by Nada Issa, “Tunisia’s Dirty Secret,” captures this prevailing sense of ordinary negrophobia. In her interview with Najiba Hamrouni, a black Tunisian journalist, unionist, and former president of the Syndicat national des journalistes tunisiens (SNJT, National Union of Tunisian Journalists), she revealed being targeted by a racist defamation campaign undertaken by supporters of the Ennahda party – the leading Islamic political party in Tunisia – who created numerous Facebook pages filled with negrophobic insults to perpetuate politically-motivated personal attacks.
How did Tunisians establish this racist and xenophobic majority? How did other Tunisians turn into closet racists? There are undoubtedly a variety of reasons for this enduring negrophobia in Tunisia. The racial issue is complex and requires a genuine social debate and even a meaningful cultural revolution.
Tunisians see themselves as whites. Whether in literature, in media, in movies, or on television, the image of the white Tunisian who communicates in eloquent French is the ideal standard against which the stereotype of the Tunisian subject is defined and performed. Affet Mosbah, a black Tunisian, poignantly asked in her influential testimony on “Being Black in Tunisia”: “Aren’t we ourselves Africans? What is the meaning of this self-exclusion by this verb?” The lack of visibility of black Tunisians in the media is the most obvious as there is no black actors or black TV hosts. The few times there were references made in national newspapers about black Tunisians or sub-Saharan immigrants, they were focused on clandestine migration.
As Frantz Fanon carefully asserted in Black Skin, White Masks, whiteness has become the desired ideal, the epitome of self-realization. The enduring internalization of the inferiority complex has turned the Arab against the black and rationalized his or her subjugation through negrophobic and xenophobic crimes. The anti-black racism in Tunisia is pervasive because it is not a social phenomenon, but also a political and cultural issue. The absence of statistics on the population of black Tunisians reveals how deep racism runs in the governmental and public institutions.
The caption in the photoshopped image at the top of this post reads in French “Je ne veux pas mourir en Tunisie parce que je suis un étranger noir”, which can be translated to “I don’t want to die in Tunisia because I am a black foreigner.” It refers to the anti-racism campaign launched by members of L’Association des étudiants et des stagiaires Africans en Tunisie(AESAT or Society of African Students and Interns in Tunisia) in late December 2016 to call for better security conditions and institutional support for sub-Saharan African students. AESAT’s campaign came into being in the wake of the most recent and obnoxious example of the growing intolerance of large number of Tunisians against its sub-Saharan African residents. The brutal attack against three Congolese students in the capital, Tunis, left two of them in critical conditions and the other wounded.
Chris, one of the victims, describes a scene where the assailant attacked him from behind while he was waiting for the metro. After assaulting Chris, the attacker continued his rampage targeting two female students. One, Jemima, is still in a coma due to serious injuries, and another, Sarah, is in traumatic shock after the attacker tried to slit her throat. These students were targeted by the attacker purely based on the color of their skin.
The image selected for the campaign refers to the figure of Trayvon Martin, the African American teen whose death in February 2012 launched the Black Lives Matter movement. The reference to the first iconic figure of Black Lives Matter is more than fitting here. The AESAT shares with Black Lives Matter an urgent call for political intervention, public empathy, and communal involvement in securing justice and security to all black people regardless of their origin, gender, or sexual orientation.

While linkages between BLM and the Arab Spring are often made, those who participated in the Arab Spring did not tackle racism in their own countries. In its wake, the degrading reality for black Tunisians and sub-Saharan immigrants remains unchanged. While the exact number of racially aggravated offenses remains impossible to identify due to institutional denial of these crimes, strong evidence from increasingly vocal civil rights organizations reveal that these attacks have been on the rise in Tunisia since the 2011 revolution.
Today, there is little hope for anti-black racism in Tunisia to disappear. In the absence of a true decolonization of the mind of the Tunisian subject and a true cultural revolution, the efforts of civil society do little to challenge the complex issues of negrophobia and xenophobia among Tunisians. There remains an urgent need for a new language of national belonging which mediates the way Tunisians see themselves and their fellow blacks.
source: africasacountry.com