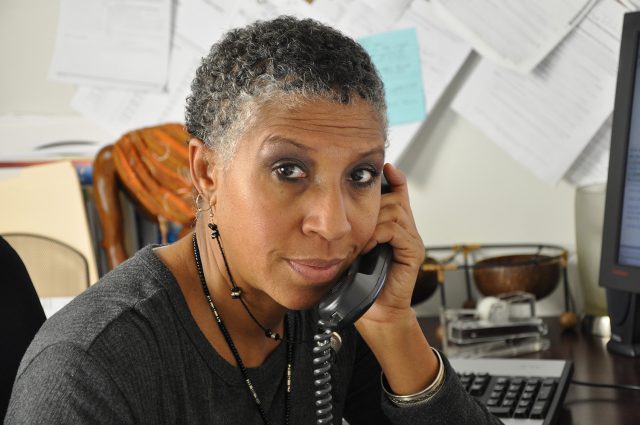 Depressed young woman using computer at the office
Two thirds (68%) reported experiencing racial bias at work (Picture: Getty)
A new survey has revealed the impact of discrimination and racism in the workplace faced by Black women in senior roles.

The report, conducted by non-profit organisation BWIL (Black Women in Leadership) Network, found that nearly half (45%) of Black women working in white-collar jobs in the UK believe they will be overlooked for promotion despite having equal competence as a non-Black female colleague.

The survey of 250 professional Black women across various industries, found that four in 10 (44%) Black women do not believe they are offered the same career advancement opportunities as their non-Black female colleagues.

Worryingly, half (50%) of the Black women surveyed who are in senior management positions have resigned due to racially related unfair or uncivil treatment. While 38% do not believe they earn the same as their non-Black female colleagues performing the same job.

The wide-ranging report, titled Black Women in The UK Workplace was commissioned by BWIL Network to address the lack of data and information on the lived experiences of Black women working in corporate organisations in the UK.

Interestingly, the study also found that four in seven (58%) Black women reported having a mentor or sponsor at work. Sponsorship remains a vital tool for career advancement and the results show a relatively low population of Black women that have access to this.

Dara Owoyemi, co-founder and director of BWIL Network, commented on the findings: ‘Our vision at BWIL is a world where competent black female professionals can truly thrive in a workplace that is increasingly free from gender and racial bias.

‘Some of the findings in our report make for sobering reading and highlight how much work still needs to be done. We hope that this study will contribute to the discourse and engagement around these vital issues of diversity, inclusion and equity as it relates to Black female professionals.’

Racism still exists during war – and it can’t be ignored

Ronke Lawal, founder of Ariatu PR and Advisor to BWIL Network, added: ‘This report offers a much-needed focus on the specific challenges and barriers that Black women professionals face in the workplace.

‘The findings of the report are not merely for publication – they also serve as a call to action to organisations. BWIL Network aims to hold organisations to account and shine a spotlight on the critical actions needed to drive change.’

How to tackle racism at work
BWIL’s report concludes with the ‘S.T.A.R.T’ framework, a list of five actions required by companies to address inequalities experienced by Black women in the workplace:

[S] Selection process
‘UK companies can reduce the likelihood of conscious and unconscious bias in their recruitment and selection process by implementing measures such as blind recruitment, diverse interview panels and removing unilateral decisions in the hiring process.’

‘Collecting and monitoring pay data, segmented by gender, will shed light on the potential pay gap for Black female employees which is often overlooked given that black women are at the intersection of gender and race.’

[A] Accountability
‘More corporations should set public diversity, equality and inclusion (DEI) goals and develop internal governance structures to track and monitor progress against the goals.

‘Half of the Black women surveyed are involved in their organisation’s diversity, equality, and inclusion committee, which signals a relatively high level of engagement.’

[R] Representation
‘Companies should work towards achieving increased Black female representation at the board level. Currently, there are no Black women on Boards of FTSE 100 companies.

‘Low representation at the board level can result in a reduced population of potential sponsors and advocates for mid-career level and senior Black female leaders in the organisation.’

[T] Talent management
‘Organisations can provide fair career advancement opportunities for Black women by establishing professional development programmes and setting rules for increasing diversity within selection committees that choose those who will be promoted.’

Job Gains Made by Black Women