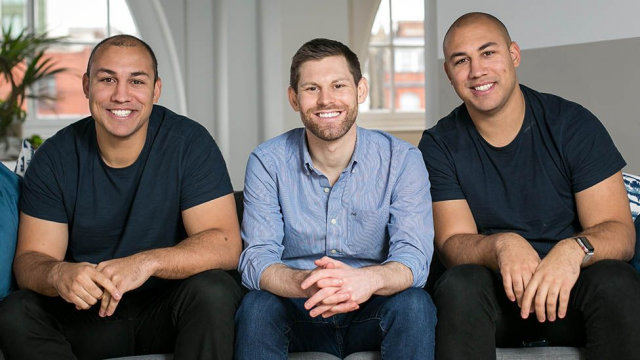 “Take the risk and be bold in your approach”
When 29-year-old twins Oliver and Alexander Kent-Braham decided to reinvent one of the most traditional areas of finance – insurance – all they had to go on was an idea and the foyer of a gym for an office.

“We were all members of Virgin Active gym. It had wi-fi, coffee and a location on The Strand!” says Oliver.

That’s where Marshmallow insurance was born, with the help of co-founder and chief technology officer (CTO) David Goaté. They had no capital and no clients but they knew they had a strong idea.

Oliver says when they conceived their insurtech firm (“insurtech” means innovating new products and services within the insurance sector) they wanted to turn the industry on its head.

Alexander and Oliver Kent-Braham, with their colleague and co-founder David Goaté

The twins had a conversation with a friend who had recently moved to the UK and kept receiving expensive quotes for car insurance led them to their big question: how do you find reasonably priced insurance if you don’t have a UK driving licence?

The key was smarter use of technology and data and they are able to specialise in products for “riskier” customers – migrants, young people and those with low credit scores.

“If we were going to start again we would look to raise capital sooner, because before you raise capital you don’t have the confidence to take the next step,” says Oliver.

“It was literally Tim Holliday (CEO of Marshmallow Insurance), David, Alexander and myself for nine months. Tim joined our company not taking a salary.”

Their next step was to raise capital. Not an easy feat.

“Venture capitalists hold the keys to starting new companies. You have to have a mutual acquaintance to even speak to many funders and that needs to change,” says Oliver.

Venture capitalist Aileen Lee coined the term “unicorn” in 2013.
Today over 800 companies globally have achieved unicorn status, 48% of those are from the US.
The first black-owned unicorn was designated just a week before Marshmallow.
A 2020 report by Notion Capital shows that just 21% of B2B unicorn tech companies across Europe and the US are led by women
Presentational grey line.
The most recent government statistics say black-owned businesses are four times more likely to have their business loan applications rejected than white or South Asian business founders.

But just getting to this stage puts the Kent-Braham brothers in a rarefied position. Just 6% of small medium enterprise companies in the UK are MEG (minority ethnic group)-led.

Be persistent, if you’re knocked down “you need to get up and try again,” says Oliver
So how exactly do you create a black unicorn?

The twins have always been driven, being offered a scholarship at the prestigious Reed School on the strength of their skill as sportsmen. That drive has carried them to the top of their field, they say.

“We played a lot of elite-level tennis and what we took from that was persistence. I think that is a skill set needed in businesses; no matter if you’re knocked down, you need to get up and try again,” says Oliver.

“We’d always had a bit of an entrepreneurial flair. When we were 12, we were selling golf balls fished out of the lake and that sort of stuff.

“It was through our early 20s where we just got really into kind of the tech world and into FinTech especially, the whole space is exciting, and that’s where we then started to think we wanted to start our own tech company.”

And further analysis found that 90% of that money went to teams with white entrepreneurs and just 0.24% went to black entrepreneurs.

The latest research from KPMG suggests that, thanks to the UK’s Covid vaccination programme and a greater business confidence in the post-Brexit environment, global Venture Capital Investment into UK companies has continued to grow, with £6.7bn being invested in the second quarter of 2021.

Back at Marshmallow, Oliver Kent-Braham has some advice for anyone looking to set-up a business: “To begin with, no one believes in you. Your parents say, ‘Oh my god, don’t quit your job!’ They don’t want you to take that risk. So take the risk and be bold in your approach.

How to Transfer Money Abroad from the UK for Cheap Today