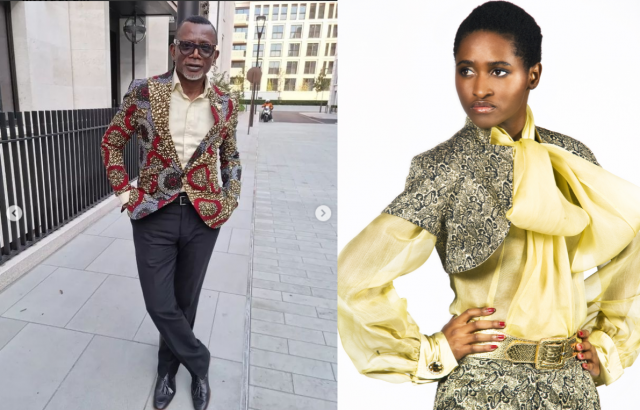 Adebayo Jones the chief designer studied fashion at the Central School of fashion in London and spent several years working with high profile British designers such as Katherine Hamnett, in London, before branching out to establish the brand of expertly made, functional and versatile collection line.

His fascination with couture soon heralded his rise to prominence as a leading couturier in the UK and beyond where his stunningly handcrafted garments have never failed to impress fashion watchers, the fashion industry and the public.

Adebayo Jones has built a brand name that is synonymous with exquisite fashion and has a reputation of being a respected and recognizable designer at the forefront of women and men’s fashion.

Adebayo Jones is also an accomplished style consultant and Style fashion TV Host who has continued to attract an international following for his fashion label over the last two decades.

According to the Nigerian born and London-based fashion maestro, “There was something about this T-shirt that stood out for me. I just had to have it. I went back home and pestered my mum for the money to buy the T-shirt which she gave to me. The occasion came to wear this T- shirt as it was church time on Sunday. It was worn with pride and almost a sense of knowing. Almost as if one were to predict the future – for on the front of the T- shirt were the words printed boldly “I’M REALLY FAMOUS.”

Adebayo started making shirts from newspapers which were held together with tapes and glue. He would make his younger ones put them on and have mock fashion shows. Even while he was at the University, where he had his first fashion show, Adebayo said “I knew then that after my degree this had to be my world. Just like the T-shirt I had when I was twelve -I just had to have this.”

Today, Adebayo is regarded as the Godfather of African Fashion in the United Kingdom as he had built a name for himself both at home and abroad. The media and critics of the fashion industry describe him as the KING OF COUTURE – for the individuality of his piece speaks for him in the international fashion community.

He is renowned for creating his own fabrics and presenting the most lavish and luxurious collections of gowns, his new bridge couture prêt, a porter collection also reflects the style and the elegance that has defined his career over the years while his success has opened doors for others in his field.

As one of the leading African designers in Europe; Adebayo Jones is known for creating the most luxurious and luscious fabrics, ranging from silks to brocades, velvets, chiffon’s organza’s, crochets and damask while presenting a fine, clean and classic lines. The fashion genius outstanding designs in formal wear and wedding dresses are second to none. His designs are often described as glamorous, elegant, magnificent, rich and mind blowing that are fit for royalty.

His influences, he says are from his travels, art, surroundings and also from the subconscious. “I have always loved fashion. It has always been my childhood dream. It was also my mother’s profession and I grew up seeing her make outfits for clients and particularly my elder sister. I had my sketch book with me always in school and would draw fashion sketches nonstop. University was no different either. I designed my outfits even when I was in school. I saved my pocket money and bought fabrics and designed my shirts and trousers. I always wanted to stand out. In school we took part in what was then called fashion parade. I was always involved if it had to do with fashion.”

In the past, Adebayo has worked for different brands including a company that lines up Hollywood top celebrities on their books from Tina turner, Diana Ross to Shirley Bassey. He has also worked with Britain’s Katherine Hamnett CBE, a two time British Designer of the Year.

At the home front, Adebayo formerly worked with HRH Erelu Abiola Dosumu, who in the 80’s had opened her shop “Talala” on New Bond street where he once worked as an intern.

However, as he once told Yalda magazine, starting out was small. Having completed his first degree in humanities at the University of Ife (Obafemi Awolowo University) in 1985, Adebayo proceeded to a fashion college in London (London Central School of Fashion) to acquire a formal and requisite training for his first love – fashion design.

His fashionpreneur stint has not been one without storm. According to Adebayo “Some have been incredibly wonderful and others have been heart-wrenchingly painful. I have known comfort as well as desertion. I have seen love as well as betrayal. I have known grace and the loss of loved ones. I have seen kindness.” In spite of this he said “All these varied experiences in pursuit of this dream and from every experience, the totality of a blessing has been gained. It is refreshing to know that I am never alone and can stand at all times, for if God be for me, nothing can work against me. I have become stronger and refined.”

He will be quick to say that his grace for resilience has worked for him. To him, “Failure is not in falling, it is in not getting up to fight again.”

Perhaps what has helped him so far is his resilience in what he does as he once acknowledged that for each piece he created, Passion, dedication, time, and a great deal of love and sacrifice go into it. “The need for an identity and signature to be embedded in the garment is important, so when someone sees a garment, they can tell immediately that’s an Adebayo Jones.”

The maestro recently celebrated 25 years in the fashion industry at the Africa Fashion Week London (AFWL) which was held at the London Spitalfields Market Halls to African and African inspired designers all over the world where he showcased his work to a 10,000 strong audience in London’s hip Shoreditch district in August, 2012.

Will he have been doing something else aside fashion, Adebayo said in an interview, “Fashion has always been a lifelong passion for me. As far back as I remember my dream has always been to explore, innovate and push the boundaries of new thought and creativity where fashion is concerned. From the conception of an idea to realizing, the end product gives one a buzz and satisfaction that cannot be quantified.”

Nevertheless, the fashion genius shares an equal passion for food and music. He sings and writes gospel songs. The fashion genius in his university days once belong to a group called the Ayoro voices. He sang at Isha and Arne Johansen’s wedding in Freetown. He also sang with a live band when he collected the Male Lifetime Achievement Award at BETTFA 2011 Awards.

As a foodie, he has a passion for exploring foods and has future plans to do something in the food industry as well.

On the reason for making London his business domain, Adebayo acknowledged that techniques, skills, availability of resources to function at one’s best is a very important catalyst to his brand’s success and there are limitations sometimes in operating back home as even the littlest of things like finding good quality zips which would not snap and embarrass your brand and your client in a situation can be tasking. He argued that basically most of those with successful brands back home do the shopping from abroad.

Adebayo, however, believes fashion can be a tool for development in Nigeria and in Africa. He said “Fashion is a huge industry. It is a multibillion-dollar industry worldwide. There are economies that boast a great percentage of their revenue from the fashion industry. Nigerians was responsible for the second highest revenue documented for fashion in the UK.

Egypt is noted for her cotton as well as manufacturing. Egyptian cotton is easily the most covetable worldwide and does not come cheap either when purchasing fashion products made from it. It is highly esteemed and valued. Tunisia, Morocco etc are major manufacturing ports in North Africa. Morocco for leather goods, which are mainly exported to Europe and boast a base of factories for shirts, jeans and other fashion separates that produced for major international brands worldwide.”

“Considering how much fashion is a huge and integral part of Nigerian life, the right support, infrastructure set up, and a conducive atmosphere for factories to be able to operate with minimal obstructions, would not only create employment for thousands, should international brand begin looking in at such manufacturing bases and to take advantage of a massive workforce. It would also attract many investors both local and foreign. If we look in and put in the right infrastructure, it would be amazing opportunity for growth and investment as revenue can be realised in this industry.”

To fashionistas, Adebayo says, “If you do go into the industry … have a balance. Fashion has its excesses as well and be strong enough to say no to things that may be injurious to your health. I would rather be un-cool at a party than end in rehab later for one form of addiction or the other. Be yourself, eventually those who considered you un-cool then will in turn respect you.”

Not all is about making money. Adebayo Jones has over the years used his skills to support various charity Organisations by hosting charity fashion shows, and travelling the Globe in support of Organisations such The British Red Cross, UNICEF Children’s fund, Pink ball Fund, Support for Africa, Imperial Breast cancer Research Fund, Kanu Nwankwo heart foundation, The heart campaign among others. He has also contributed to Education both in the UK and abroad by working with various schools, colleges and universities in educating and training students for the fashion industry. His high-profiled company has also been a haven of employment to Nigerians and Africans in Diaspora.

He’s phenomenal success has been widely acclaimed all over the world and has received various international award to boot. In 2009, he was honored with the N4LIFE AWARD first special recognition for his outstanding contribution to fashion industry in the UK and for promoting the image of Nigeria positively through fashion on a global platform.

On the 29th of November 2009 at the Nigeria fashion awards held in Abuja Nigeria, Adebayo Jones won the BEST NIGERIAN DESIGNER IN DIASPORA AWARD; while in 2010, the designer was the recipient of three Fashion awards in the UK alone.

Cause and Effect? Bill Cosby may be right about African-Americans spending a lot on...

Chicken Connoisseur shoots to Internet Fame then gets Channel 4 Show