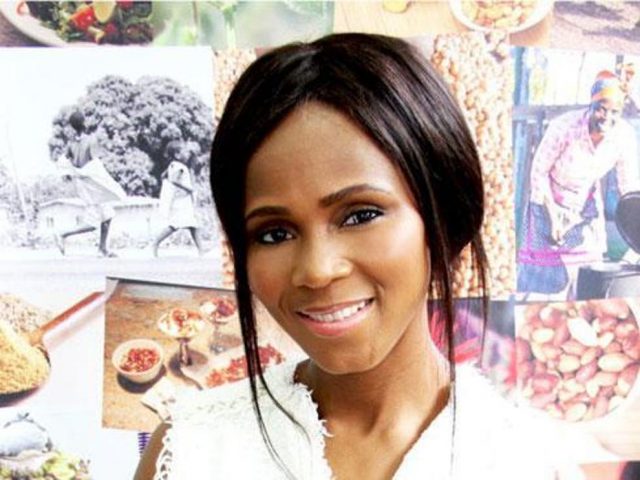 In the two years since Chika Russell turned down £30,000 from Peter Jones on the BBC’s show for budding entrepreneurs, she has secured £800,000 in funding from eight investors

Though London-born, Russell identifies with her Nigerian roots: ‘I feel like the traditions, the food, the culture, are instilled in me and my children’ (Chika’s Snacks)

“People totally think my husband is giving me money for a hobby to keep me quiet at home,” Chika Russell laughs down the phone from her office opposite the Innocent building in West London.

When she talks about throwing private art shows at her Notting Hill home, where guests would rave about her homemade Nigerian snacks, you can almost see why. But Chika’s Snacks is a business built on more than a bit of pocket money.

In the two years since Russell turned down £30,000 from Peter Jones on Dragons’ Den, she has secured £800,000 in funding from eight investors, and Chika’s Snacks have been snapped up by stockists including Waitrose, Whole Foods and, starting in October, Sainsbury’s. Next, Russell wants to use some of the profits from her luxury nuts to sponsor children through school in Nigeria.

“The fundamental reason is to give back to the communities where the inspiration for the snacks comes from,” Russell says. She devised a plan to sell to individuals the same way that she sells to hotels and businesses: in large quantities. From October, customers can buy a Snacks 4 Change caddy and 500g of nuts to fill it for £5.99, of which 20 per cent will go towards sponsoring a child in West Africa.

Originally Russell thought she would partner with a charity on Snacks 4 Change. But as she looked into it more, she realised she could do the programme with fewer overheads by working with her own connections in Nigeria. You believe her when she says it. If Russell has proved anything since she started mass producing snacks in February 2014, it’s that she’s a force to be reckoned with.

“A lot of people thought the task of launching Chika’s was impossible but I’ve made it work,” she says. “People have ideas, but execution is the main thing. My skill is not ideas, it’s execution.”

Russell was the youngest of seven siblings. She was born in London, because her Nigerian father wanted her to get an English education, but she identifies as Nigerian. Each summer, the siblings would return to Nigeria where they would spend all the time outside: “I feel like the traditions, the food, the culture, are instilled in me and my children.”

She took her English education seriously, studying accounting and economics at university and going to work as a management accountant at Royal Bank of Scotland and ICAP. “My hours were unbelievable,” she says now. “I worked my ass off!” Russell would start the day at 7am and finish around 8 or 9pm that evening.

During that time, Russell was still living at the family home. She had invested in two London properties by the time she left home at 24 to get married. “I got married and fell pregnant and I knew I wanted to be a present mum as much as possible. My husband is in banking, and a nanny would have raised our kids, so I decided not to go back to work,” she says. Parenthood was fulfilling, but there came a moment in early 2013 when she realised that it was time to get back to work.

“I was thinking about my older son, who is amazing, but I knew I wanted to go back to work for a couple of hours,” she remembers. She decided to get in touch with someone in recruitment. She thought it would only take a couple of weeks to find something. But she became pregnant again and that’s when she realised she wouldn’t be going back to work in the City.

Instead, she started thinking about the West African snacks she made when people came over for those art exhibitions, like hand-toasted peanuts and plantain chips. “People were always so kind about these snacks, and I would think, that’s because they’re free!”

When she asked her husband if he thought there was a market for West African snacks in the UK, he wasn’t so sure. Russell started researching the idea anyway: “He knows I’m like a dog with a bone!”

Russell started making samples of snacks at home and taking them to hotels and bars to give tastings. Less than a year later she settled on a product and looked into manufacturing, importing peanuts from Nigeria and making the plantain from scratch in the UK, using techniques she learned from West Africa.

At first the money came from some savings she put aside when she was still living at home. “I knew it wasn’t really enough to change my life so I decided to gamble that money,” she says. As the business grew, she refinanced the two properties she bought in her twenties. Her husband eventually contributed to the manufacturing costs.

Then in 2017 she brought in £800,000 from eight investors including Jeff van der Eems, the chief executive of United Biscuits, Marco Corradini, the CEO of lastminute.com, and Robert Devereux of Virgin Money and Soho House. She speaks highly of her relationship with investors and other mentors, such as Sahar Hashemi OBE, the founder of Coffee Republic and Skinny Candy, who called her up out the blue.

“She took us under her wing, she said she loved the products and loved the team and the office but the packets had no soul.”

A redesign, inspired in part by Hashemi, is part of the next phase of Chika’s Snacks. The rebrand will be on the shelves in the second week of October, when Russell launches Snacks 4 Change.

The support of big investors proved Russell’s instinct to turn down the Dragons’ Den money two years ago. “It’s easy to say now, because it worked,” she says. “But Dragons’ Den taught me to have conviction.” It’s hard to believe there was ever a time when she didn’t.

Re-imagined – a black version of a Michelangelo Sistene Chapel Painting

What are Crypto Assets and What Do They Mean for My Tax?