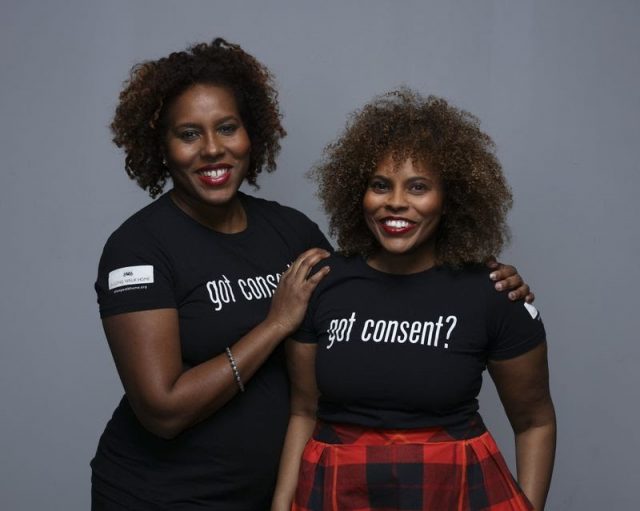 Sisters Salamishah Tillet, left, and Scheherazade Tillet have been fighting for decades to end violence against Black women and girls.

Black women and girls are often left out or erased from the social justice movement. A large part of that is because funds for the organizations that center them and their experiences are scarce.

A recent study showed that philanthropic giving from foundations averaged about $5.48 for each woman or girl of color in the United States. This minuscule portion accounts for just 0.5% of the $66.9 billion given by foundations, according to Giving USA 2018.

For Black women and girls, the amount is even smaller because this data encompasses all women and girls of color, including Asian Americans, Latinas and Indigenous people.

The Black Girl Freedom Fund, created by a notable group of leaders and activists, hopes to change that, and specifically invest in Black girls and women.

Eight Black women from around the country who lead organizations that center girls and women of color are among the co-founders of the fund, including Tarana Burke, who coined the phrase “Me Too.”

Sisters Salamishah and Scheherazade Tillet, founders of A Long Walk Home, a national organization based in Chicago that trains Black girls and women to become artists and activists against violence to women and girls — whether it be police violence, sexual assault or domestic violence — are also co-founders of the fund.

The recent Black Lives Matter protests, as well as data from the June report, which exposed the lack of philanthropic and institutional support, pushed the fund’s founders to galvanize, said Salamishah Tillet.

“When Black Lives Matter first emerged, there was a newfound commitment to racial justice, but the lives of Black girls and Black women, who are also killed by police violence, were left out of those conversations,” said Salamishah Tillet. “This is another moment where we can see a marshaling of resources for some community members, and not all community members, and we didn’t want that to happen, to have history repeat itself.”

Salamishah Tillet called the philanthropic amounts given to women and girls of color “extremely pitiful,” especially for citizens “who do a lot of the labor in our communities and also are oftentimes at the forefront of our social change.”

The fund is essential because it meets a desperate need and fills the gap for the resources and funding that have been missing to support Black girls, said Scheherazade Tillet.

“A lot of organizations that are Black-led that are for girls, a lot of people can’t afford to do this full time. (Some) have two different jobs. It’s a project for them,” said Scheherazade Tillet. “And in this particular moment, where we are being extremely stretched with these crises of COVID on the South Side and West Side neighborhoods, resources are directly needed even more and are critical, and more specifically to Black girls.”

Once the money is raised, Black women-led organizations that focus on the experiences and needs of Black girls will receive a portion of the funding first. Organizations across the nation will work collaboratively with some of the funds, almost like sharing one big pot.

“It’s really about a cultural reshifting of thinking about dollars going towards girls,” said Scheherazade Tillet.

The fund was officially launched on the anniversary of the 1963 Birmingham church bombing because, in many ways, the tragic murder of four little girls was a galvanizing moment for the civil rights movement, said Salamishah Tillet.

“(The bombing) was a moment in which there was a national outcry and international sympathy for the lives of Black girls,” said Salamishah Tillet. “It’s a particularly poignant moment in American history and it’s one of the most significant and most memorable moments when we’ve come together to think about Black girls’ lives as so vulnerable.”

Scheherazade Tillet called the launch of the fund a reclaiming of Black girlhood.

“It’s important to say to Black girls, ‘You deserve a fund like this; you deserve a billion dollars.’ It seems like such a high number, but it’s also putting a value to the work and the labor that they have been doing to get the resources they need.”

Investors are missing out on black founders with great companies.