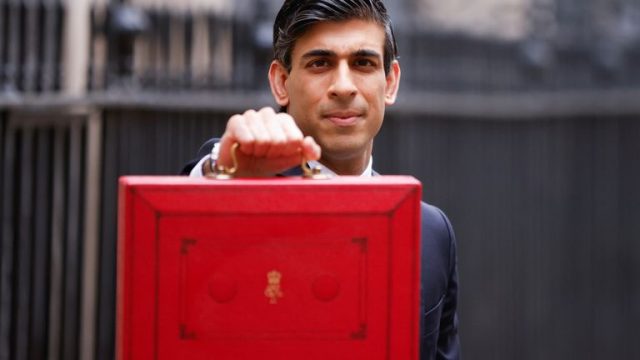 What was announced in Chancellor Rishi Sunak’s speech?
Here is everything you need to know as the chancellor delivered a budget dominated by the battle to recover from the COVID-19 crisis.

• Economy expected to return to pre-COVID levels by the middle of next year, six months earlier than previously thought

• GDP growth forecast for this year downgraded to 4% (from 5.5%), according to the Office for Budget Responsibility

• Unemployment expected to peak at 6.5%

• £1.6bn will go towards continuing the vaccine rollout and improving future preparedness

• Chancellor confirms furlough scheme will be extended until the end of September, with the government paying 80% of salary – though employers will be asked to put in 10% from July and 20% from August

• Help for the self-employed will also be extended with changes meaning 600,000 more people will be eligible

• Bounce-back and other coronavirus loans for businesses will be replaced by a new recovery loan scheme, 80% guaranteed by the government

• Companies will be able to offset losses against their tax bills going back up to three years, allowing them to claim additional refunds of up to £760,000

• Incentive payments for hiring new apprentices are being doubled to £3,000 while £126m will be invested to triple the number of new traineeships

• The business rates holiday for retail, hospitality and leisure sector firms has been extended to the end of June and for the remaining nine months of the fiscal year they will still be discounted by up to two-thirds

• Reduced rate of 5% VAT for the hospitality and tourism sectors has been extended to the end of September, and will only go up to 12.5% after that, before returning to 20% next April

• The chancellor confirms £5bn of new grants for hard-hit firms – worth up to £6,000 for non-essential retailers and £18,000 for restaurants, pubs, personal care and gym businesses which will reopen later

• The stamp duty holiday on properties worth up to £500,000 will be extended from the end of March until the end of June and after that there will still be no duty on homes worth up to £250,000 for another three months. After that the threshold returns to the usual level of £125,000 from October

• Personal income tax thresholds will be frozen from next year until 2026 – at £12,570 for the basic rate and at £50,270 for the higher rate – dragging more people into paying as their salaries rise in line with inflation

• Planned increases in duties on beer, cider, spirits and wine – as well as fuel – will be cancelled

• The first ever UK Infrastructure Bank will be set up, in Leeds, with an initial capitalisation of £12bn – to finance public and private sector “green industrial revolution” projects

• Eight freeports – special economic zones with different rules to make it cheaper and easier to do businesses – have been announced at: East Midlands airport; Felixstowe and Harwich; Humber; Liverpool city region; Plymouth; Solent; Thames; and Teesside

• Visa reforms are being introduced to make it easier to attract the “best and most promising international talent” in science, research and tech

• Rules will also be changed to allow pension funds to plough billions into innovative new ventures and, in line with a review by Lord Hill, to encourage more companies to float in London

• A total of £700m will go on supporting arts, culture and sports as they reopen

• A £150m fund will help communities take ownership of pubs, theatres, shops or local sports clubs at risk of being lost

• To tackle fraud in COVID support schemes there will be £100m to set up an HMRC taskforce with 1,000 investigators

• Under a national spending formula, the budget will mean £1.2bn more for the devolved administration in Scotland, £740m for Wales and £410m for Northern Ireland