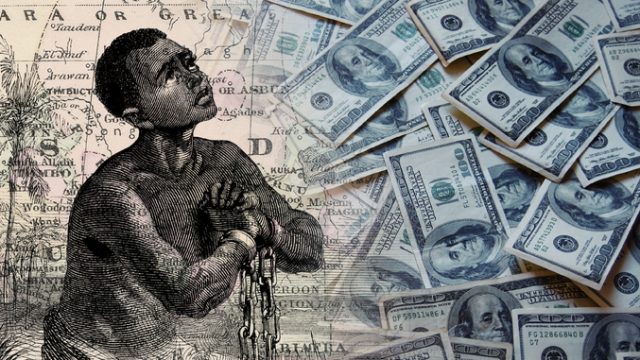 He was, of course, referring to outcry after president Donald Trump declined to denounce white supremacist groups during his debate with Joe Biden on Tuesday night.

Newsom the signed Assembly Bill 3121 into law on Wednesday. The bill opens the door to the state paying reparations to Black Californians, especially those who are descendants of slaves. It specifically calls out insurance companies:

Existing law requests the Regents of the University of California to assemble a colloquium of scholars to draft a research proposal to analyze the economic benefits of slavery that accrued to owners and the businesses, including insurance companies and their subsidiaries, that received those benefits, and to make recommendations to the Legislature regarding those findings.

Existing law requires the Insurance Commissioner to request and obtain information from insurers licensed and doing business in this state regarding any records of slaveholder insurance policies issued by any predecessor corporation during the slavery era. Existing law requires insurers to research and report to the commissioner on insurance policies that provided coverage for injury to, or death of, enslaved people.

AB 3121 does not commit to any specific payments. It calls for a nine-person task force that will make recommendations for how reparations could happen, whether through compensation or restitution.

The task force created by the bill will consist of five gubernatorial appointees and four people chosen by the state legislature. “The Governor shall call the first meeting of the Task Force to occur no later than June 1, 2021,” it states. The task force is instructed to deliver recommendations no more than 12 months from that date.

The task force’s powers, according to the law, include:

-Request the attendance and testimony of witnesses

For those who think slavery did not exist in California, there are these passages — and many others — from the state’s official Historical Society on the subject:

California’s constitution proclaimed that “neither slavery nor involuntary servitude, unless for punishment of a crime, shall ever be tolerated.” Yet archives statewide contain evidence that slavery was practiced out in the open.

In 1848 when the gold rush hit, white southerners flocked to the state with hundreds of enslaved Black people, forcing them to toil in gold mines, often hiring them out to cook, serve, or perform a variety of labor. Sometimes fortunes were amassed on the backs of this free labor. Yet California’s place in the nation’s history of slavery is missing from most historical accounts and many are surprised to learn of its practice in the golden state.

Among those on the Zoom call for the signing were members of the California Black Caucus, the Chicano Caucus and also Ice Cube, who was singled out specifically by the bill’s sponsor, Assemblywoman Shirley Weber (D-San Diego), as “one of our real champions” who has supported the effort. He also got a “thank you” from Newsom just before the signing.

Cube later tweeted his thanks to the governor.

Weber called the bill “ground breaking,” and pointed out the bills were authored last year, long before the death of George Floyd and so many others sparked protests. “A lot of people think we’re responding to the moment,” said Webber, before pointing out that the imperatives go much further back. “We’re responding to the history of California.”

The task force can also make recommendations on eliminating state laws and policies that perpetuate discrimination and on issuing a formal apology “for the perpetration of gross human rights violations and crimes against humanity on African slaves and their descendants,” according to the bill.

“California has come to terms with many of issues, but it has yet to come to terms with its role in slavery,” said Weber, who chairs the black caucus and introduced the Assembly Bill 3121, said at the bill signing ceremony. “AB 3121 is groundbreaking for the United States, to basically say this state is going to deal with the issue of reparation and we’ll make a difference as the result of that.”

In related news, Assembly Bill 3070, also introduced by Weber, was made law on Wednesday by Governor Gavin Newsom. The law combats racial discrimination in jury selection. It establishes a presumption that certain reasons for excluding jurors are proxys for racial discrimination. The law seeks to root out implicit or unconscious bias in jury selection.

“The new law represents a big step forward for racial equity,” Holden said. “While some corporations were already leading the way to combat implicit bias, now, all of California’s corporate boards will better reflect the diversity of our state. This is a win-win as ethnically diverse boards have shown to outperform those that lack diversity.”

At one point one assmbley member expressed what were likely the sentiments of all present. With a wink to Ice Cube he said, “Today was a good day.”

The Black Church. Is this the Key To Black Economic Empowerment?