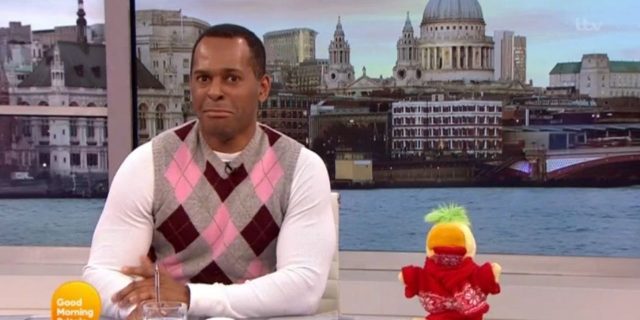 Andi Peters – TV longevity, no booze and a Phillip Schofield clap back. He is a television presenter, producer, journalist, voice-over artist and voice actor.

Andi is teetotal and ridiculously buff and it was a seriously awkward exchange with Phillip Schofield that kick-started Andi Peters’ career.

He’s been on TV screens for longer than most millennials have been alive, with his stints in the BBC’s Broom Cupboard and on Live and Kicking as much a part of the nineties as bum bags and plug-in footspas.

Andi Peters recently stood in for Lorraine on the ITV morning show straight after Good Morning Britain. We have to say – he did very well. Witty and quick, he brought a different dimension to morning TV, and we wish he had his own show – every day going forward.

He will soon be back telling us about holidays in the obligatory ITV competitions and it seems like a total waste of talent – but perhaps it pays well. And he does get to fly all over the world describing great destinations for holidays and wondrous prizes.

After leaving Live and Kicking in 1996, the Andi and his snazzy waistcoats seemingly disappeared.

His departure was all the more shocking given that, along with Phillip Schofield, he’d been one of CBBC’s big deals.

In fact, it was a somewhat awkward exchange with Phil, 58, that inspired Andi, 50, to pursue a career in TV.

Andi Peters was just 18 when he joined the BBC

GMB’s Andi Peters celebrated his 50th birthday with first studio visit since lockdown. He honestly does not look a day over 21.

“Phillip then wrote on the back of the signed picture and sent it back saying ‘get some local radio or hospital radio experience, and I’m sure you’ll make it one day.’ And he was right!”

Andi’s first gig was for Top Man’s in-store radio in Oxford Street, London, which led to a job linking shows on ITV.

The Beeb quickly took notice of the young talent, and signed the then 18 year old in 1989, pairing him with TV legend Edd the Duck.

He graduated from the cupboard in 1993 for a move to brand new Saturday morning show, Live and Kicking.

But the promotion still proves to be a bone of contention, with Good Morning Britain’s Ben Shephard claiming Andi actually applied to host Blue Peter but didn’t get the part.

He regularly goes head-to-head with Ben Shephard – whose career he started.

“I turned it down because I wanted to do Live & Kicking. When he offered it to me, I was really conscious that I didn’t want to do the job.

“I got really upset and ran all the way to the controller of BBC One and said ‘They just told me that I had to do Blue Peter but I don’t want to do it, I want to do [Live and Kicking] instead’.

“Luckily, he said don’t worry, you’ll get to do Saturday mornings. So yes! The rest is history.”

His three-year stint alongside Emma Forbes, 55, catapulted the show to success. But Andi had other plans and traded his coveted gig to go behind the camera at LTW.

While some might have considered his break away from the spotlight to have been an odd move, it turned out Andi was a natural producer and after joining Channel 4 he became the architect of their entire T4 offering.

Launching the careers of the likes of Vernon Kay, Alexa Chung, Dermot O’Leary, he even hand-picked the cast Shipwrecked – one of the first every reality TV shows.

“There’s a generation of people who grew up with T4 so it’s interesting when people come up and say it meant a lot to them. Yesterday a girl came up to me in a coffee shop and said she was in the first series of Shipwrecked and I cast her. Jeff Brazier was in Shipwrecked and he still works in TV.”

In 2003 the BBC coaxed him back to run its music and lifestyle programmes for younger viewers, including Top of the Pops, Later with Jools Holland and the broadcaster’s Glastonbury coverage.

Asked why the sudden 180, he told Metro: “[Presenting is] my passion. I started out as a presenter and without that I wouldn’t have been able to produce anything.

“And unlike producing, you don’t have to take the work home with you. Once you’ve done the show, it’s done. When you’re producing, you’re sometimes managing big teams and that never stops. I thought I’d go through a phase of presenting for a while.”

Since then he’s narrated The Big Reunion and regularly appears hosting competitions from far-flung destinations on ITV’s Good Morning Britain and Lorraine. He also works as a rugby agent and owns a fitness modelling agency.

But what about his life away from the office? Andi has always kept his private life private, making no mention of romantic partners in interviews.

He’s not believed to be married and in 2016 he appeared to suggest he was unattached by tweeting a picture of a sign about being single.

We wish much more success for Andi, since many of the broadcasters he started with have gone on to huge careers. Some in Hollywood – and he is still in Shepherds Bush (His words). But we must remember he has done much production work behind the camera.

Peters worked for a number of years at LWT and then for Channel 4 Television as commissioning editor for youth and children’s programmes. Among his TV producer credits are The Noise (ITV), The O-Zone (BBC), Top of the Pops (BBC) and Shipwrecked (Channel 4).

Come on somebody – give him his own show permanently in addition to his competition gigs.