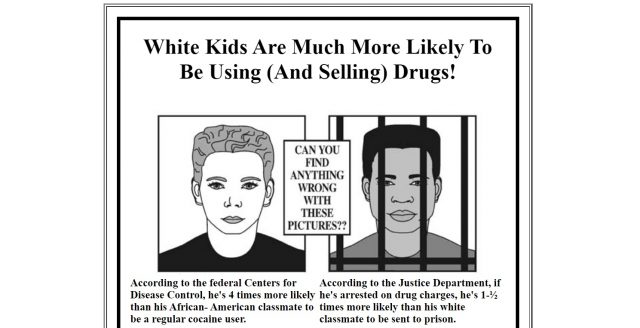 White Americans are more likely than black Americans to have used most kinds of illegal drugs, including cocaine, marijuana and LSD. Yet blacks are far more likely to go to prison for drug offences.

This discrepancy forms the backdrop of a new legislative proposal in California, which aims to reduce the disproportionate incarceration of black people in the state. Supporters of the bill, SB 649, point to some striking national data.

Nearly 20 percent of whites have used cocaine, compared with 10 percent of blacks and Latinos, according to a 2011 survey from the Substance Abuse and Mental Health Services Administration — the most recent data available.

Higher percentages of whites have also tried hallucinogens, marijuana, pain relievers like OxyContin, and stimulants like methamphetamine, according to the survey. Crack is more popular among blacks than whites, but not by much.

Still, blacks are arrested for drug possession more than three times as often as whites, according to a 2009 report from the advocacy group Human Rights Watch.

Of the 225,242 people who were serving time in state prisons for drug offenses in 2011, blacks made up 45 percent and whites comprised just 30 percent, according to the Bureau of Justice Statistics.

Jamie Fellner, author of the Human Rights Watch report, offered an explanation for this discrepancy.

“The race issue isn’t just that the judge is going, ‘Oh, black man, I’m gonna sentence you higher,'” she said. “The police go into low-income minority neighborhoods and that’s where they make most of their drug arrests. If they arrest you, now you have a ‘prior,’ so if you plead or get arrested again, you’re gonna have a higher sentence. There’s a kind of cumulative effect.”

Lawmakers in California hope to blunt that effect. Last week, both houses of the state legislature passed SB 649, which would give judges and prosecutors the option of charging people convicted of drug offenses with misdemeanors instead of felonies. Those offenders could then be sent to substance abuse treatment centers instead of prison or jail.

Supporters of the bill, including its author, state Sen. Mark Leno (D-San Francisco), note that black adults represent one-quarter of all felony drug arrests in California, despite comprising just 5 percent of the state population.

“One can take it to conspiratorial or racist theories or not,” Leno told HuffPost. “The motivation I don’t think needs to be determined. The results are the same: Our policy and lawmaking perpetuate a chronic underclass of citizens.”

Former prisoners who were convicted of felonies often face steep official barriers to “the very things that are needed to keep one successful in recovery,” he added — namely, education, housing and employment.

The federal government can deny public housing assistance to anyone who has been convicted of a felony drug offense. Students who have been convicted of drug possession are barred from receiving federal financial aid and substantial education tax credits. And employers often require applicants to disclose their criminal histories, despite a growing nationwide movement to ban that practice.

Not all drug offenses in California automatically result in felony charges. Methamphetamine, LSD and certain other drugs are known as “wobblers,” meaning that possession of those drugs can be charged as a felony or a misdemeanor. The new bill would basically extend this “wobbler” approach to heroin, cocaine and most other drugs. Blacks use heroin and cocaine more than they use meth and LSD, which are primarily used by whites.

In recent years, states from New York to Texas have adopted reforms that resemble SB 649, and leaders across the political spectrum have pushed for changes to the country’s drug sentencing policies. In August, Attorney General Eric Holder announced that the Justice Department would no longer pursue mandatory minimum sentences for certain low-level drug offenders, citing “shameful” racial disparities in the criminal justice system.

Yet some drug reform advocates worry that Gov. Jerry Brown (D) might not sign the California measure, noting that he has often seemed reluctant to embrace progressive criminal justice policies.

Like other reforms aimed at reducing California’s prison population, SB 649 could help relieve the state’s budgetary woes, supporters say. Drug sentencing policies are widely blamed for the enormous size and costs of the country’s prison systems. And few prison systems are bigger or more expensive than California’s.

At the height of America’s war on drugs, from the 1980s through the mid-2000s, more than 20 prisons opened in California, compared with just 12 between 1852 and 1984. California’s prison population increased more than fivefold in the later decades, and prisons now cost the state’s taxpayers close to $10 billion a year.

**
White high-school students who are current users of cocaine: 4.1%1

African-American high school students who are current users of cocaine: 1.1%

**
Percent of white drug felons sentenced to prison by state courts each year: 27%

Percent of black drug felons sentenced to prison by state courts each year: 43%

Percent of white drug felons given probation or nonincarceration sentence by state courts: 32%

Percent of black drug felons given probation or nonincarceration sentence by state courts: 25%