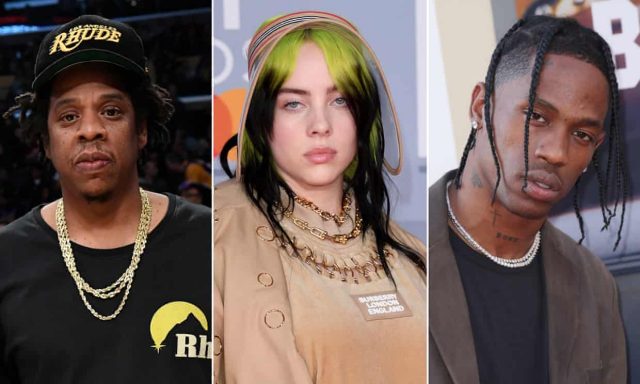 Stars from across the pop music spectrum, including Billie Eilish, Jay-Z, Ariana Grande and more have used their sizeable platforms to support protesters and condemn police brutality, in the wake of the killing of George Floyd and other black Americans.

Eilish, 18, wrote a lengthy post on Instagram to her 63m followers, castigating those who use the phrase “all lives matter” in response to the Black Lives Matter movement. “No-one is saying your life doesn’t matter. No-one is saying your life is not hard … This is not about you,” she wrote. “Society gives you privilege just for being white … we have to address hundreds of years of oppression of black people.”

After sharing Eilish’s post, pop singer Pink responded to critics of it as “the epitome of white privilege … you don’t even hear yourself and probably never will”.

Jay-Z, long a champion of civil rights, described himself as “a dad and a black man in pain” in an Instagram post via his Roc Nation company and said he had spoken with Minnesota governor Tim Walz. He welcomed the appointment of black Minnesota attorney general Keith Ellison to the Floyd case, and called on him to “prosecute all those responsible for the murder of George Floyd to the fullest extent of the law”.

Jay-Z’s wife Beyoncé asked for signatures for a petition calling for charges to be brought against others involved in the Floyd killing, and said: “We’re broken and we’re disgusted. We cannot normalise this pain.”

Other stars from the US rap scene shared messages of solidarity. Travis Scott spoke of “this enraged feeling of us continuously losing our brothers and sisters to brutality at the hands of officers … The rage that we are feeling is from direct personal experience and the constant pain of wanting our voices to be heard. To be seen as equal and human, too.”

Gunna, whose album Wunna topped the US charts this week, said: “It’s hard celebrating a #1 album when the world is hurting”.

Last week, Dr Dre said of the Floyd killing, “It felt like that cop had his knee on all of our necks, meaning black men. And yeah, it’s extremely painful.”

Ariana Grande shared photos of peaceful protest in Los Angeles to her 74m Twitter followers as well as links to Black Lives Matter resources, while chart-topping singer Halsey posted photos of police with the caption: “Fired rubber bullets at us. we did not breach the line. hands were up. unmoving. and they gassed and fired.”

@ArianaGrande
hours and miles of peaceful protesting yesterday that got little to no coverage. All throughout beverly hills and west hollywood we chanted, people beeped and cheered along. We were passionate, we were loud, we were loving. Cover this too please. #BLACKLIVESMATTER

Black US pop singer Normani posted a long and impassioned message to Instagram, saying: “I am filled with rage … I am not here for your entertainment. I am not some animal in a cage that you put on display and praise for being articulate but turn around and hunt me for sport.” Her former Fifth Harmony bandmate Camila Cabello attended a Miami protest with pop star boyfriend Shawn Mendes, and wrote: “I stand with you in outrage … let’s stand together for justice.”

Following Taylor Swift’s criticism on Friday of Donald Trump’s combative response to protests – “After stoking the fires of white supremacy and racism your entire presidency, you have the nerve to feign moral superiority before threatening violence?”

Lady Gaga also voiced her disapproval of the US president. She said on Saturday: “Right now is a critical time for the black community to be supported by all other communities so we can put a stop to something that is intrinsically wrong … President Trump has failed. He holds the most powerful office in the world, yet offers nothing but ignorance and prejudice when black lives continue to be taken.”