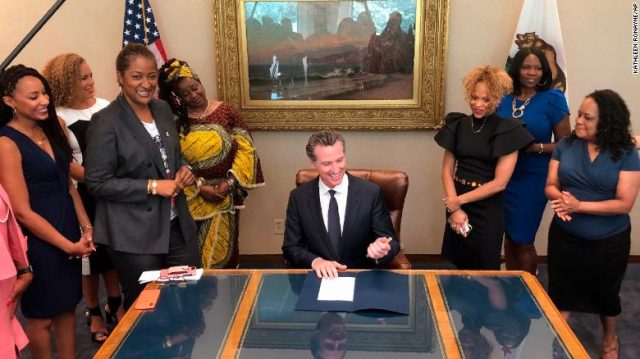 (CNN)California became the first state in the United States on Wednesday to ban employers and school officials from discriminating against people based on their natural hair.

Gov. Gavin Newsom signed the Crown Act into law, making it illegal to enforce dress code or grooming policies against hairstyles such as afros, braids, twists, and locks.

Los Angeles Democrat Sen. Holly Mitchell, who introduced the bill earlier this year, said the law is about “inclusion, pride and choice.”
“This law protects the right of Black Californians to choose to wear their hair in its natural form, without pressure to conform to Eurocentric norms,” Mitchell said in a statement Wednesday. “I am so excited to see the culture change that will ensue from the law.”

The student had to choose whether “to lose an athletic competition or lose his identity,” Newsom said.
“That’s played out in workplaces, it’s played out in schools — not just in athletic competitions and settings — every single day all across America in ways that are subtle, in ways overt,” Newsom said during a bill-signing ceremony.
Law will foster inclusion and diversity.

The new law, which takes effect Jan. 1, 2020, addresses policies against natural hair that are unfair toward women and people of color, the governor’s office said.
“Workplace dress code and grooming policies that prohibit natural hair, including afros, braids, twists, and locks, have a disparate impact on black individuals as these policies are more likely to deter black applicants and burden or punish black employees than any other group,” according to the law.

As the Crown Act was headed to the governor’s desk, Mitchell said the measure would encourage schools and businesses to create grooming policies that foster inclusion and diversity.

African-American men and women have often had to endure expensive, painful and even dangerous chemical treatments to change their hair to conform to these beauty standards, she said.

‘Too many reports of black children humiliated’
Mitchell said that until recently an image search for “unprofessional hairstyles” only showed black women with natural hair, braids or twists.

“I believe that any law, policy or practice that sanctions a job description that immediately excludes me from a profession — not because of my capacity or my capabilities or my experience but because of my hairstyle choice — is long overdue for reform,” said Mitchell, who observed that she wears her hair in a natural style.
Mitchell said that similar state and federal laws protect against discrimination due to religious hairstyles and head coverings.

“However, there are still far too many cases of black employees and applicants denied employment or promotion — even terminated — because of the way they choose to wear their hair,” she said. “I have heard far too many reports of black children humiliated and sent home from school because their natural hair was deemed unruly or a distraction to others.”

A few other states have proposed similar measures. Last month, a bill intended to ban discrimination based on hair was introduced in the New Jersey Legislature.

In February, New York City passed similar protections on the right to maintain natural hairstyles that are closely associated with racial, ethnic or cultural identities.
CNN’s David Williams and Alexandra Meeks contributed to this report