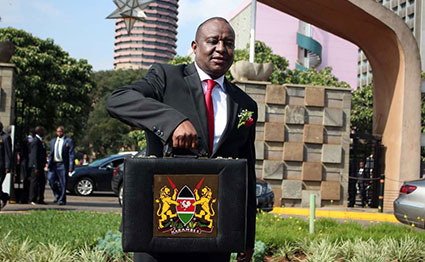 The writer:
Date first published: 28 May 2019
The debt position has reached a dangerous level that it poses a real and massive systemic risk.
For the first time in more than a decade, Kenya has reached out to the World Bank for an urgent loan in the form of budget support.
This signals the gravity of the country’s rapidly deteriorating cash-flow situation that is characterised by falling revenues and worsening debt service obligations.
The Nation has learnt that the World Bank’s board is set to make a decision on whether or not to approve Nairobi’s application for a Sh75 billion loan, described as Inclusive Growth and Fiscal Management Development Policy Financing.
The type of credit Kenya has sought is a quick-disbursing facility where money flows straight into the budget to top up the public purse.
Under the regime of former President Mwai Kibaki, Kenya kept away from this type of credit and most of the support from the World Bank came in the form of project support.
The loan application is contained in a letter to the President of the World Bank, Ms Kristalina Georgieva, by Treasury Cabinet Secretary Henry Rotich, dated March 13, 2019, in which he says the money is needed to fund the Big Four agenda.
According to the project document on the bank’s website, the loan will enable the government to crowd in private investment and financing for affordable housing; enhance farmer incomes and food security; create fiscal space to allow the government to invest in key development programmes; and crowd in private investment and leverage digitisation to support the government’s inclusive growth agenda.
However, budget support is not tied to specific projects and can be used to fund politically-important activities. The cash could also be vulnerable to appropriation by corrupt political elite.
The Nation has learnt that the proposed funding is facing opposition from some countries with representation on the bank’s board, with critical voices saying that in the context of weak financial public management systems and challenges, such as the one the government faced in trying to account for Eurobond proceeds, the type of loan is hardly suitable for Kenya.
In his letter, Mr Rotich cites recent high-profile measures which the government has taken to fight corruption, such as the arrests and prosecution of government officials and business people.
He says that the government has not only conducted lifestyle audits on all public officers, but that it is now aggressively executing compliance to wealth declaration by public servants.
Should the loan be approved, it will add to Kenya’s growing debt burden. The country’s debt position has reached a dangerous level, with experts warning that it poses a real and massive systemic risk.
“What we should be looking at is debt service-to-government revenues, and much less the GDP-to-debt ratio popular with our Treasury. We continue to justify the current situation where the Treasury prefers to use debt-to-GDP, hence arguing that we’re within the IMF benchmark sustainability ratios,” said an economist.
Kenya’s debt service-to-revenue ratio  stands at 38 per cent, up from 17 per cent in 2012 and way above the global benchmark of 25 per cent. This means that, for every Sh100 in its pocket, Kenya is spending Sh38 for debt service, Sh45 on salaries and wages (including pensions) and Sh40 on recurrent expenditure. The country, therefore, is spending Sh123 for every Sh100 it collects in revenue.
These calculations do not factor in development expenditure, meaning that the country is not only borrowing for development expenses, but also to meet its recurrent expenditure commitments.
Last week, a report by the Parliamentary Budget Office (PBO) showed that the Treasury was masking the true budget deficit by using a set of numbers that ignore adjustments.
The budget experts also accused the Treasury of overshooting the budget ceiling given by Parliament and approved through its own Budget Policy Statement (BPS), which is prepared months ahead of the budget.
The PBO said the 2019/2020 budget is higher than the approved ceiling by Sh78 billion.
“The higher expenditure levels have been accommodated through upward adjustments in the revenue projections from the BPS level by about Sh35 billion,” the PBO report to Parliament notes. The document, titled Unpacking the Estimates of Revenue and Expenditure for 2019/20 and the Medium Term, is prepared for legislators to guide them when they convene to deliberate and consider the next budget, which starts on July 1.
“This masks the true deficit by seemingly maintaining it at the BPS level despite the higher expenditure adjustments,” PBO says in its report.
source: nation.co.ke

Study Shows That, Duh, Everyone Watches Shows With Black Casts