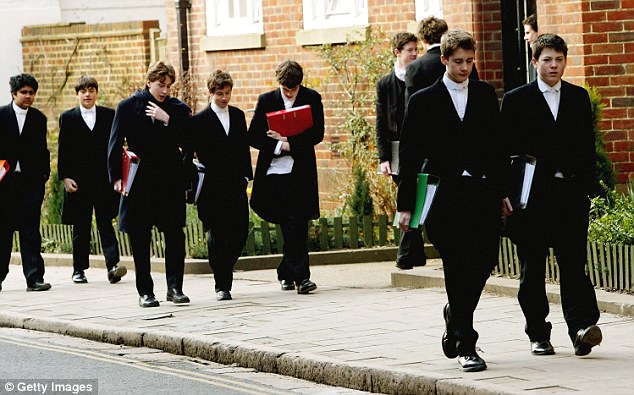 By Jessica Green for Mail Online
Published: 4 August 2018
Eton is one of the UK’s most exclusive boarding schools, once home to Prince William, former Prime Minister David Cameron and many famous actors including Fantastic Beasts star Eddie Redmayne.
Yet while renowned for its prestige, the newest generation of well-off Etonians have decided it is ‘cool to be common’, according to a former pupil.

‘Eton has gone street’ claimed Hugo Engel, one of ten pupils known for being granted a private audience with Vladimir Putin in 2016.
Eton is one of the UK’s most exclusive boarding schools, once home to Prince William, former Prime Minister David Cameron and many famous actors including Fantastic Beasts star Eddie Redmayne.
The boys now take inspiration from London street gangs and grime artists when styling themselves and pick ‘high-end’ tracksuits rather than traditional tailcoats, Engel wrote for Tatler magazine.
Not only have their choice of clothes changed, but students can be heard using street slang to communicate.
Harrow shows a similar trend with pupils’ Facebook accounts showing a mix of school cricket team pictures alongside homemade rap videos.
‘A sea change has been washing over public schools, and leading the charge is Eton, where certain boys now think it’s never been so cool to be common.
‘These students – who may have been brought up in some of Britain’s most historic houses – aim to give the impression that they grew up on a very different kind of estate,’ said Engel, who is now studying politics and philosophy at the London School of Economics.
There is a reluctance to reveal an Etonian background which comes after Boris Johnson’s resignation left the Cabinet in the rare position of having no Old Etonians, reported the Telegraph.
Public school boys are even being seen having ‘gang fights’ after one started at the annual cricket match between Eton and Harrow at Lord’s, however ‘unsurprisingly, this particular turf war resulted in no stabbings and the fight was broken up by teachers rather than police officers,’ Engel said.
Yet the students have an advantage of being able to drop the adopted persona when desired, Engel added: ‘Streetonians may be able to adopt the ways of the urban youth when it suits, but they also have the privilege of effortlessly displaying their polished upbringing when it is to their advantage in other situations.’

Why Your Choice of Driving School Is Important