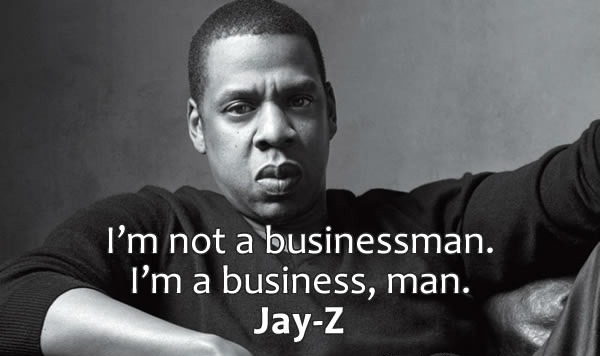 Check Out All The Businesses Jay-Z Is Into
by Pascal-Emmanuel Gobry
(first published Oct. 28, 2010 – prior to Tidal)
Most people are by now aware that Jay-Z is not just a rap artist but a bona fide business mogul with many very well performing businesses. But it’s easy to escape just how many different businesses he’s into. If you count those he started, those he licenses his image or IP to and those he advises, it’s very impressive, especially given how many sectors he’s into.
Last week the Wall Street Journal did a great story on Jay-Z’s business empire that you should go read. But we’ve compiled all the interesting businesses that Jay-Z is into from that list.
Roc Nation
Jay-Z created this company with Live Nation in a $150 million, 10-year deal. In the internet age, the company makes money not just on music sales but on music publishing, artist management and touring.
Live Nation put up $25 million up front and $5 million every year for overhead for this new venture, and will get a share of the revenues, which is going to come not just from Jay-Z’s own work but from new talent he’s planning on incubating there.
The company hasn’t put out one artist since it was founded two years ago and yet is profitable, says Jay-Z, precisely because of its diversified revenue streams. Smart.
[[[ Update, 2018 – Roc Nation has a wide range of artists including:
Belly
Casanova
Claudia Leitte
DJ Mustard
DOROTHY
G4SHI
Farina
J. Cole
Jaden Smith
Jay Electronica
Jay Park
JAY-Z
Justine Skye
Karen Rodriguez
Key Wane
MaGz
Mayaeni
Mariah Carey
Mozart La Para
Mr. Paradise
Rapsody
Rihanna
ROMANS
Romeo Santos
Shakira
Sir Charm
T.I.
The Lox
The-Dream
Vic Mensa
Victoria “La Mala”
Willow Smith ]]]
The New Jersey Nets
Nets Cheerleaders nba.com/nets
Jay-Z is a part owner of the NBA team the New Jersey Nets. Last year Forbes valued it at $269 million.
The 40/40 Club
Jay-Z founded the 40/40 club, a chain of sports bars with a club atmosphere. The club now has eight locations, including Tokyo and Macao.
The Spotted Pig
After investing in the semi-famous chic New York bistro in the West Village, Jay-Z bought the entire building. The place is Michelin-starred and doesn’t empty.
Rocawear
http://www.Under30CEO.com
Jay-Z founded Rocawear back in 1995 and has promoted the hell out of it since, and it’s worked. He sold the company for $204 million in 2007, but retains creative and operational control.
Carol’s Daughter
We’ve got to admit this one surprised us: Jay-Z co-owns the Carol’s Daughter line of perfumes and beauty products. The line has been featured on shows like the Tyra Banks Show and Oprah.
“Decoded”
Associated Press
Jay-Z is is publishing a book called Decoded, built around his lyrics and that is, according to the WSJ, “a hybrid of music history, social commentary and memoir.”
What’s interesting here from a business perspective is the innovative promotion: Jay-Z got Microsoft to put up $1 million to promote the book as part of an initiative with Bing. Pretty cool.
Bonus: The WSJ tells us Jay-Z has been friendly with Bill Gates ever since they met at a 2006 conference on the future of entertainment. We’re not surprised the two hit it off.
Reebok
In a four-year partnership, Jay-Z became the first non-athlete to have a line of Reebok shoes named after himself, the S.Carter line, which was popular.
Budweiser Select
Typically for how Jay-Z works, in 2006 he didn’t just star in ads for Budweiser Select, but he also helped craft them.
Interestingly, one of the reasons why he chose to go with Budweiser was in response to the image of rappers as drinking champagne constantly.
Cherry Coke
Coca-Cola, the world’s greatest brand, brought in Jay-Z to advise on the redesign and relaunch of Cherry Coke.
HP
Remember that awesome HP commercial with Jay-Z? We love it.
Translation Advertising
Most of these brand partnerships (Budweiser, Coke, HP) go through the ad agency Jay-Z cofounded with Steve Stoute, a serial entrepreneur who had sold his previous company to Interpublic, the third largest ad agency conglomerate.
Music
Oh, we almost forgot! Jay-Z also makes a little music once in a while. He’s had more Billboard 200 albums than any solo artist (and anyone except the Beatles), he’s won 10 Grammy awards and sold 45 million albums overall. His last album, “The Blueprint 3,” debuted at number one and was his first album to have 3 Top 10 singles.
Because his early tracks were rejected by most labels, Jay-Z made one of the smartest moves ever and started his own label, Roc-A-Fella Records, which had a distribution deal with Def Jam Records, where he was President and CEO from 2004 to 2008.
Source: businessinsider.com (2010)