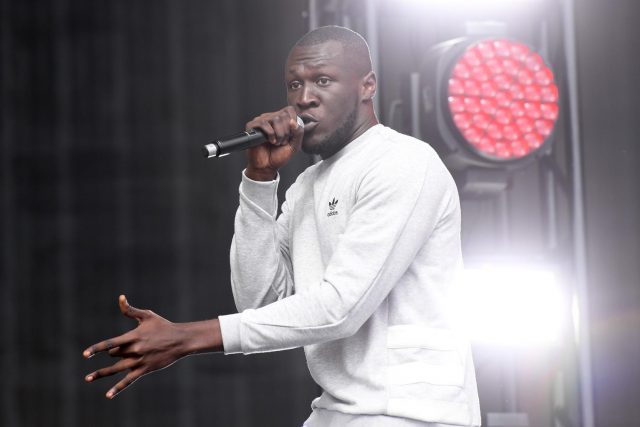 Wow. STORMZY! Brit Awards 21 February 2018 – What a night! What a performance! After many years of watching the Brits where black people did not get a look in (hence the creation of the MOBOs), look at Stormzy now with TWO of the biggest awards of the night. Best male act, and Best Album. #BRITs2018 Happy Dayz.
And then Stormzy tops off a huge night with a barn storming performance, in the pouring rain – invoking some strong political commentary during his rap. Say what.
These are some of the headlines in the newspapers the next day:
The Metro –
“Stormzy ends Brit Awards with ferocious takedown of Theresa May’s handling of Grenfell”
The Mirror –
Stormzy asks Theresa May: “Where’s the money for Grenfell?” in Brit Awards performance
Twitter was ablaze with Stormzy chatter. Here are some tweets.
Elizabeth states:
Stormzy brought religion, politics, and road to the #BRITs Backed it for Grenfell, gave a shout out to Daniel Kaluuya & Jourdan Dunn, sang in the rain, and didn’t get muted once. He’s a legit national treasure
Ben Webb said:
Think what you will about Stormzy’s music, but to take the opportunity to speak out for the people on such an influential stage takes bravery – and hopefully others follow suit.
Huge respect to him.
Jourdan Dunn (model) states:
Stormzy for Prime Minster
Dr Lauren Gavaghan said:
Stormzy’s phenomenal performance calling out both Theresa May & the Daily Mail at #BRITs2018 could not have come at a better moment. As the rags desperately try & smear Corbyn, & Tory MP’s shamefully follow suit, the message of #ChangeIsComing could not be heard more clearly.
NHSMillions states:
Not usually the kind of post we would make, but it was really refreshing to see #Stormzy at the #Brits last night. Great to see a young person involved and engaged in politics. Hopefully he can get the younger generations more interested in using their vote.
Hannah said:
Full #Stormzy TM bit 🔥 “Theresa May, where’s the money for Grenfell? What u thought we just forgot about Grenfell? Yr criminals & u’ve got the cheek to call us savages, u should do some jail time, u should pay some damages.
And a white 63 year old woman who tweeted:
Are there any other 63 year old Stormzy fans? You made an old woman very happy tonight. Brilliant! #StormzyBRITs #GrenfellTower #DailyMail @stormzy
Yomi is so happy – and tweeted:
Between Daniel Kaluuya’s BAFTA and Oscar nom, Letitia Wright’s Black Panther debut, Stormzy’s *TWO* Brit awards, Michaela Coel’s million pound Netflix deal, Ramz charting at 2, John Boyega thriving in Star Wars…what a time for black kids from ends. My heart
And – the UK Government opposition leader
Jeremy Corbyn‏:
Congratulations @Stormzy1 for winning your first #BRIT award, and what a powerful performance. #Grenfell
Stormzy responded on twitter around midnight. – #GSAP
@Stormzy1
Love you all, thank you, thank God, emotional, overwhelmed, speechless…gonna go have a drink and party with my family ❤️
The aftermath
I would imagine today, the day after the 2018 Brit awards, that the streaming figures of Stormzy’s album has gone up 10,000 percent. We will report real figures, as we find them.  Sales of the album will sky rocket in a vertical line. Not even a diagonal slope. Stormzy is still trending on twitter – and video clips of his performance were dominating the online chatter last night.
I have to confess, one of my daughter’s was obsessed with Stormzy way back when he started. I didn’t approve. I grew to like him over time – but now – I have huge respect for the man. I looked into his background and here is what I found.

Stormzy’s Rise
Stormzy was born in 1993, and his parents named him, Michael Ebenazer Kwadjo Omari Owuo, Jr. Yea, bit of a mouthful – so thankfully he chose the stage name Stormzy.
Stormzy originates from Thornton Heath, South London, and his parents hail from Ghana. He has huge love for South London, and calls out the area often at his performances. He began rapping at the age of 11 and would clash with older rappers at his local youth club.
Stormzy said about his school years, “I was a very naughty child, on the verge of getting expelled, but I wasn’t a bad child; everything I did was for my own entertainment. But when I went into an exam I did really well. He said he got six A*s, three As and five Bs at GCSE – which is huge by anyone’s standards.
This may have made him complacent for two years later he was disappointed by his less stellar performance at A Levels. He would later say,”For someone who would cuss in class and was on the verge of being expelled, it was A-Levels that showed me that in life you need work ethic.”
After garnering attention on the UK underground music scene via his Wicked Skengman series of freestyles over classic grime beats, Stormzy released his debut EP Dreamers Disease independently in July 2014.
On 22 October 2014, Stormzy won Best Grime Act at the MOBO awards. Later that month he became the first unsigned rapper to appear on Later with Jools Holland performing the song “Not That Deep” from Dreamers Disease.
When Stormzy won a Mobo for best Grime Act in 2014, he acceptance speech was touching. He appeared in shock, saying he never imagined this. One of his friends had quit his job to manage him. Now in 2018 he is King of the UK.
He won Best Grime Act at the 2014 and 2015 MOBO Awards and was named as an artist to look out for in the BBC’s influential Sound of 2015 list. His most successful song to date is the BPI platinum-selling “Shut Up”, which was initially released as a freestyle on YouTube. The track was then officially released and got to number eight on the UK Singles Chart after Stormzy launched a campaign to reach Christmas number one. Number 8 is still great for a debut artist, with no record label, and street style promotion.
His low point since is rise to fame must have been when police were kicking down his front door for ‘trying to burgle his own house’.  Unbelievably, the officers thought he was robbing his own home.  You cannot make up this farce.  Some busybody in the area (Chelsea) must have seen a black man going in the apartment, and thought – he couldn’t possibly afford to live there.  This happened 13 February 2017.  I call this the darkest hour before dawn.  The whole population must know who Stormzy is now.
After a year’s hiatus from social media, Stormzy returned in early February 2017 via a series of billboard campaigns across London displaying the hashtag #GSAP 24.02. The album title was announced to be Gang Signs & Prayer. The album was released on 24 February 2017 and debuted at number one on the UK Albums Chart on 3 March 2017.
It is interesting to note that GSAP was Stormzy’s debut album, although he has been winning awards since 2014. It is also released on his own record label – Merky.
Stormzy has made  power move to create a solid foundation.  On the 17 February, 2017, Stormzy took to Twitter to announce that his notorious brand, #MERKY, is now officially an independent record label.
It’s wise to assume that Stormzy’s  Gang Signs And Prayer album was released via the label a week later. It remains to be seen if Stormzy will be signing any other artists to join him on the roster.
#MERKY has already expanded onto the airwaves, with a semi-regular slot on Apple Music’s radio platform Beats 1.
Congratulations to Stormzy and the entire #MERKY team. No doubt, there may be a number of huge record labels coming to knock on your door now, but you are doing just fine without them.
Stormzy describes himself as “a child of grime” influenced by the likes of Wiley and Skepta, but also cites R&B singers such as Frank Ocean and Lauryn Hill as influences on his sound.  He is hugely popular with the youth and is keen to help motivate them.
So we can establish that Stormzy is a very intelligent young man with faith, ambition and a steely determination. He will an incredible force for good. With money coming in, and a great team around him, there is nothing to stop him. He does not appear to be the type to be waylaid by drugs and erratic behaviour. We look forward to watching this powerhouse as he attempts to change the world as he speaks strongly about politics, faith, street life and youth in his lyrics.
by D. Grant @black_economics