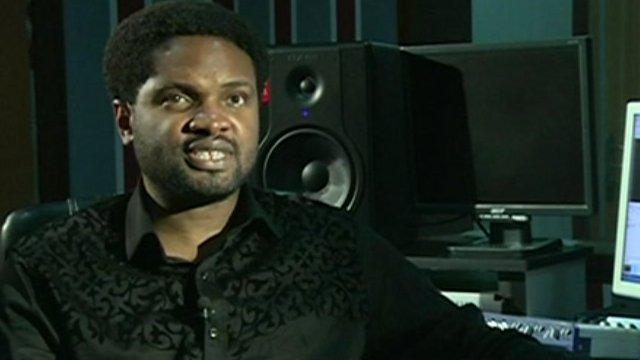 Nigeria’s Cobhams Asuquo is one of his country’s leading music producers and has helped propel to stardom singers like Asa, whose 2007 debut album became an international hit.

In addition to producing the album, he wrote and co-wrote several of its songs.  Blind from birth, he says he always had a keen ear for music and would coax a tune from anything he could get his hands on.

“My love for music began to manifest itself from when I was about age six or so, when I started to puff my cheeks and play the 12-bar blues,” he told the BBC’s series African Dream.

“I moved on from there to locking myself up in the bathroom which was, you know, the average child’s nightmare, but I would do it just because of the reverberating effect I got whenever I whistled from the bathroom

“I just enjoyed the sound. I literally would come into the living room and beat on anything I found, from the dining table to other things in the kitchen to barrels that we used for storing water, all kinds of stuff,” he added.
Although nobody in his family played an instrument, a friend who noticed his musical inclination gave him a toy piano.
“I pretty much figured out tone and movement and all of that, and I guess music just began to take form in my life from then on.”
His eclectic taste, he says, was partially influenced by his father who had a varied collection of records which ranged from R&B and soul to Nigerian and Caribbean music.
Nurturing talent
Mr Asuquo was studying law at the University of Lagos but decided to leave it and branch into music full-time. 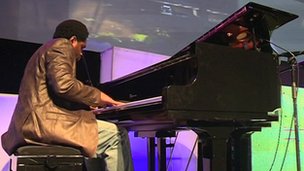 In 2005, he signed on to Sony ATV London as a songwriter and a year later, after working as head of audio productions for Nigerian label Questionmark Entertainment, he set up his own recording facility.

He had no capital, just a computer and ideas that he took to different companies offering advertising and begging for work.
He is now the CEO and head of productions of Cobhams Asuquo Music Productions (Camp) which, according to him, is an all-encompassing entertainment firm.
It employs five people and outsources whatever they cannot do, depending on the project he is working on.
“Part of what we do is to discover, to nurture, and to grow and develop, and to expose talent. As a business, as a label we’ve been doing this since 2008,” he told the BBC’s Tomi Oladipo.
Today, at 32, he is as much in demand in his native Nigeria as he is in other parts of the world.
“There is the expectation, you know, from me to share the African perspective, to bring the ‘Africanness’ to the sound which, to be honest, I’m very very proud [of].
“I always see it as my opportunity to lend my voice to the rest of the world, to tell an African story, to bring out the African culture, the African drum, the African sound.”
Like his hero Stevie Wonder, the musician has never let his lack of sight hold him back.
“It’s assumed there are many things you can’t do because you’re blind. And so, for me I had to prove that there are many things I can do because I’m blind, and that there are many things I have done because I’m blind,” he said.
“People have come to trust me with their music and with their sound, and with the fact that I’d be patient to search for their sound, obviously because I’m not distracted by many other things,” he added.
Creating magic

Mr Asuquo says that he is determined to help others taste the success that he has enjoyed.

He is a judge on the Nigerian talent television show Project Fame and, according to him, his own production company is always looking for the stars of the future.
But he points out that he is not interested in working with people whose only drive is the potential financial rewards the industry offers.
“I am excited to work with an artist as long as I feel that such an artist desires more than just the commercial or the financial benefits of music. I like to work with people who want to create magic, people who want to go a little afield, go a little off the usual path.”
He also warns that success in the music business does not come easy.
“I’ve slept on many studio floors in Lagos and outside of Lagos just, you know, for a chance to make music, to show that I can do this. I guess it’s paying off. Here we are in our own establishment, just doing our own thing.”
However, he believes that there is still plenty more to achieve.
“We are not where we want to be. We are aware that we are not where we started but there is so much to do, so much work to be done, so much further to go from where we are. We’re on our way,” he said.
And what advice would he give to people who want to succeed in the music industry?
“Try, as much as possible, to be honest with yourself and let the people who are around you be honest with you. Is it something you can do? Is it something you’re gifted to do?
“And, if truly it is, I’d say, keep at the back of your mind that your gift or the talent to do it is not enough. There is work, there is persistence, there is consistency, and you’ve gotta keep just pushing, keep doing it.”
He also believes that people should strive to be themselves and not ‘a carbon copy’ of others who may have influenced them.
“You’ve got to have something unique, whether it’s your story, it’s your voice or it’s your lyrics, it’s the sound of your instrument or it’s the combination of all of these different factors.
“I just believe that everything depends on everything and so whenever I have an opportunity I give it my very best shot.”

A Revival of Black Business