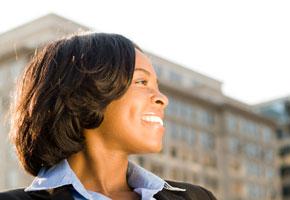 There seems to be one segment of the American population that is making strides in the job market–Black women.
According to the latest numbers from the Bureau of Labor Statistics, since December, Black women have shaved more than 3 percentage points off their unemployment rate, from 13.9 percent to 10.8 percent. That’s the biggest decrease during the last five months for any single demographic group broken down by race, sex, and age. Among the factors for this improvement: education, health care, and retail.

“It’s important to look at the cited areas in which there have been increases for a couple of reasons,” says Laura Hertzog, director of EEO/Diversity & Inclusion Programs at Cornell University’s ILR School. “First, both education and health care are areas traditionally- and still- dominated by white women, but in which Black women have been making gains in the last couple of years as a percentage of the workforce. Second, in the last few years, the profile of teachers has been shifting towards younger teachers (under 30), as older teachers retire. Younger populations tend to be more racially diverse. Third, I was surprised that the numbers did not specify if this was full-time work or part-time. Education, and particularly health care and retail are all areas that have substantial numbers of part-time workers. Given that the Black female unemployment rate overall is about double that of white females, it may be that these job gains are primarily in part-time jobs that may not be as appealing to white females who have better opportunities.”
Among Black men, unemployment dropped from 15.7 percent in December to 13.6 percent in April. For white women, the numbers basically remained unchanged at 6.8 percent, the same rate as white men. Still, total white unemployment remains below total Black unemployment. White unemployment in April 2011 was half that of Black unemployment, 8.1 percent versus 16.2 percent. According to the latest numbers, the difference is 6.8 percent compared with 13 percent.
The employment rate of Black women has continually increased over the last few months, from 53.5 percent in December, to 56.1 percent in April. Meanwhile, employment participation has fallen among white women, dropping nearly a full percentage point since April 2011, from 55.6 percent to 54.8 percent.
“The options for Black women are sometimes limited and they must strive to  employment regardless of the cost, even if it means taking a lower salary,” notes Black businessowner Chantay Bridges, owner of Clear Choice Realty & Associates and motivational coach and speaker. “They are extremely capable, independent, savvy and overall go- getters. They must work; they have no choice. Many are single and are head of household, which requires employment of some nature. Black women have continued to develop and increase their skill sets which is leading to more job opportunities. Black women are pursuing higher education, which is developing into more of them becoming qualified, over-qualified and quite competitive in the work arena. Black women are determined to excel, to reach their next level. Black women are starting their own businesses and capitalizing on their gifts and abilities. Minority women are more determined now than they ever have been before and will not allow anything to stop them – not the economy or the job market. Nothing will deter them from reaching their dreams.”

Rihanna in Charge of a Major Luxury Fashion House in Paris