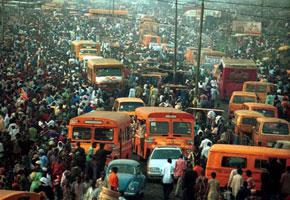 While the news has caused much debate, theInternational Monetary Fund (IMF) has announced that Nigeria is now the third fastest growing economy in the world.
“Nigeria’s expanding economy has been very positive news in recent years. Nigeria is the economic heart of west Africa, and like sub-Saharan Africa as a whole, its macroeconomics are undeniable,” says Joel Patenaude, managing partner at J2 Partners Inc., who has worked in financial services in Nigeria since 2009, points out.

“Nigeria’s economy is, however, still very resource- dependent on non-oil aspects of the economy, which is mostly consumer-focused consumption. Nigeria lacks productive capacity, due to high operating costs which include a very poor electrical grid. Aside from oil, minerals and some foodstuffs, there is nothing to buy in Nigeria. The opportunity in Nigeria is to sell consumer goods to the growing middle class.”
Nigeria’s GDP growth for 2010 was 8.4 percent. And while in 2011, the GDP dropped to 7.68 percent, it still ranked Nigeria as the third fastest growing economy in the world. Nigeria was behind Mongolia, which had 14.9 percent GDP increase and China, which saw a 8.4 percent GDP growth rate.
This announcement only furthered the push behind a Nigerian government initiative entitled Vision 2020, through which the country aims to be one of the world’s strongest economies by year 2020.
“The IMF news means that Nigeria will continue to influence economic growth on the African continent. Nigeria has, for many years now, been one of the strongest economies in Africa due to its leadership position in ECOWAS (Economic Community Of West African States) politically and economically. This trend will continue. It will be one of the strongest indicators for investment in Africa,” says Josiah Osibodu, president of Osibodu & Associates Exporting USA, LLC based in Tampa, FL. Osibodu, who is a U.S.-born citizen of Nigerian heritage and works in conjunction with his EMS partner, Toki Mabogunje, managing director of Toki Mabogunje & Company based in Lagos, Nigeria.
Although many are skeptical about how the IMF came to its conclusion about Nigeria’s GDP growth rate, the news remains good for the African nation. “In Nigeria it means the country will continue on the path of diversifying the economy,” says Osibodu. “The government will intensify its efforts in growing the non-oil sector of the economy. This is great news for SMEs (small and medium-sized enterprises) as most of them operate in the non-oil sector. Growth will continue, more opportunities for investment will open up. Particularly in the exploitation of the country’s vast natural resources. Nigeria will continue to lead the economies of West African states. Hopefully this growth will be followed by development in infrastructure and human capital, it should create wealth and job opportunities, stimulate innovation and technology and ultimately reduce the poverty index impacting our present security challenges by providing job opportunities for the country’s teeming youth population.”
But will the news increase outside trade and investment in Nigeria, which some in business consider risky due to instability? “The recent instability in Nigeria’s north is NOT helping the country’s image. It continues a trend of economic terrorism that has been present in the Delta region for many years and leads Nigeria’s entries in international news, thus forming negative world opinion,” says Patenaude.
Osibodu agrees. “Nigeria has not been very good at marketing itself in the past. It would have to engage in creating visibility for itself in more positive ways other than the negative news it gets from the Western media. It would have to court the Western media by providing the sort of content and news that reflects it in a positive way. More trade missions should be undertaken, there should be greater engagement and dialogue by the government at global economic forums, debates, and platforms not just from a debt perspective which was the case for a long time, but from an investment and opportunities perspective,” he says. “The country should also continue to drive continental agendas such as NEPAD (The New Partnership for Africa’s Development) , which was seen as a welcome initiative by the Western world.”
But, notes Osibodu, this could be a prime opportunity for Nigeria to change the global perception. “The Nigerian government would have to become more investment-friendly,” he says. “The World Bank has a ‘doing business in Nigeria’ report that basically highlights the impediments to investment. These impediments need to be removed. Government policies on investment need to be consistent and growth-oriented. The country as a whole must become more productive than consumptive.”
There is much to change, adds Patenaude. “A generalized improvement in an investment climate, particularly development of local early stage and venture capital investor bases, will only result if some dozens of measures, from improved rule-of-commercial law and an ability — now missing — to collect on bad debts are implemented,” he says. “And Nigerian bureaucrats remain very controlling, predatory and opportunistic and as a result Nigeria remains a place of deals versus a place of rules.”
However, Patenaude seems optimistic about the economic future of Nigeria. ”Africa, and Nigeria in particular, can be a great target market, particularly for consumer-focused western businesses. African governments could potentially be capitalizing on stories such as these to encourage additional western investment in their countries – however, they are handicapped by various issues,” he explains. “Given the present reality, no marketing campaign will have any effect. The big investors will still come regardless of political risk – private equity firms will continue to invest in mines, large scale farms and oil wells. “