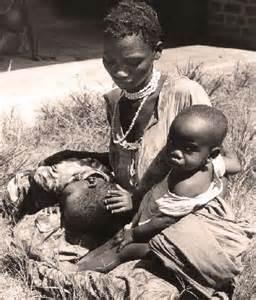 The UN Food and Agriculture Organization estimates that 239 million people in sub-Saharan Africa were hungry/undernourished in 2010 (its most recent estimate). 925 million people were hungry worldwide. Africa was the continent with the second largest number of hungry people, as Asia and the Pacific had 578 million, principally due to the much larger population of Asia when compared to sub-Saharan Africa. Sub-Saharan Africa actually had the largest proportion of its population undernourished, an estimated 30 percent in 2010, compared to 16 percent in Asia and the Pacific (FAO 2010).  Thus almost one in three people who live in sub-Saharan Africa were hungry, far higher than any other region of the world, with the exception of South Asia.

In 2008, 47 percent of the population of sub-Saharan Africa lived on $1.25 a day or less. (United Nations 2012).
What are the causes of hunger and poverty in Africa?
In general, the principal causes of poverty are  harmful economic systems, conflict, environmental  factors such as drought and climate change, and population growth (WHES 2012).  Poverty itself is a major cause of hunger. All are very important as causes of poverty and hunger in sub-Saharan Africa.
Poverty
Poverty is the principal cause of hunger in Africa and elsewhere.  Simply put, people do not have sufficient income to purchase enough food. Conflict and drought, for example, are certainly important causes of hunger, but the most typical situation is that people just do not have enough income to purchase the food that they need—they could be starving in some slum somewhere, for example.  As noted above, in 2008, 47 percent of the population of sub-Saharan Africa lived on $1.25 a day or less, a principal factor in causing widespread hunger.
Harmful economic systems
Hunger Notes believes that the principal underlying cause of poverty and thus hunger in Africa and elsewhere is the ordinary operation of the world’s economic and political systems. Essentially control over resources and income is based on military, political and economic power that typically ends up in the hands of a minority, who live well, while those at the bottom barely survive. We have described the operation of this system in more detail in our special section on Harmful economic systems.  The role that harmful economic systems play cannot be demonstrated briefly and should not be taken as confirmed truth by students, who should nevertheless consider it seriously. Controlling the government and other sources of power and income is a fundamental way of obtaining income.  Freedom in the World is an annual index that measures the degree that people have political rights and civil liberties.  See its (mainly low) freedom rankings for sub-Saharan African countrieshttp://www.freedomhouse.org/report-types/freedom-world. One way that those in positions of power obtain income is through corruption.  The 2011 map of perceived corruption worldwide done by Transparency International (2011) shows that many sub-Saharan African nations are viewed as corrupt.
Conflict
2011 saw suffering on an epic scale. For so many lives to have been thrown into turmoil over so short a space of time means enormous personal cost for all who were affected. We can be grateful only that the international system for protecting such people held firm for the most part and that borders were kept open. –Antonio Guterres, UN High Commissioner for Refugees (UNHCR 2012)
Conflict is a principal source of human misery, including poverty and hunger. Poverty rates are 20 percentage points higher in countries affected by repeated cycles of violence over the last three decades. Every year of violence in a country is associated with lagging poverty reduction of nearly one percentage point. People living in countries currently affected by violence are twice as likely to be undernourished and 50 percent more likely to be impoverished. Their children are three times as likely to be out of school .  Countries with serious human rights abuses or weak government effectiveness, rule of law, and control of corruption have a 30 – 45 percent higher risk of civil war, and significantly higher risk of extreme criminal violence than other developing countries (World Bank 2011b).
The threat of death and serious injury resulting from conflict can result in such a desperate situation that people leave their homes. This is in spite of the fact that this requires leaving nearly everything behind:  house and land, sources of income, and most possessions,  becoming uprooted from the place where you have lived (which was home and loved), to go–typically a journey of great danger–in search of a better alternative, which is usually a very bare bones refugee camp or other marginal situation. Africa had an estimated 13.5 million refugees and internally displaced persons in 2011, as Table 1 indicates.  While not all refugees are caused by conflict/violence, most of them are.

–Adapted from UNHCR 2012 p 45
Environment
Africa faces serious environmental challenges, including erosion, desertification, deforestation, and most importantly drought and water shortages, which have increased poverty and hunger by reducing agricultural production and people’s incomes.  Many of these challenges have been caused by humans; the environment can be said to be overexploited.  Deforestation, for example, has been caused by humans seeking new places to live, farm, or obtain firewood.  Drought, water shortage and desertification in Africa have been caused to some extent by global warming, which has mostly been caused by the effects of human energy use outside of Africa.
Population growth
Africa’s population has been increasing rapidly, growing from  221 million in 1950 to 1 billion in 2009.  Africa, the world’s poorest continent, has the highest population growth rate. A woman in sub-Saharan Africa will give birth to an average of 5.2 children in her lifetime (Guardian 2011). This rapid growth, along with other negative factors such as harmful economic systems, conflict and  deterioration in the environment,  has limited growth in per capita income, causing poverty and hunger.