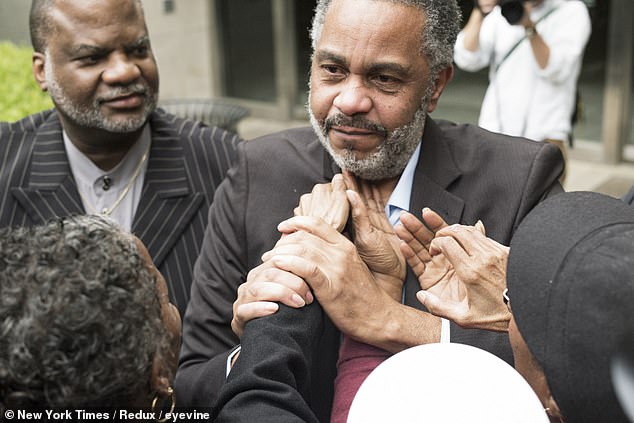 THE SUN DOES SHINE

At around midnight on July 25-26, 1985, two things happened 15 miles away from each other in Birmingham, Alabama.

At 11.57pm, 29-year-old Anthony Ray Hinton clocked in for his night shift at Bruno’s supermarket warehouse. He worked in the locked warehouse until 4am.

At 12.30am in another area of the city, the manager of Quincy’s steak house, Sidney Smotherman, was driving home when he was bumped from the rear and forced at gunpoint to drive back to the restaurant, where he was shot in the head but not killed.

Later shown a selection of photographs of suspects, Smotherman identified Anthony Ray Hinton as the gunman who had shot him.

As it happened, there had been two murders of restaurant managers in Birmingham in similar circumstances in that same year.
A week later Hinton was mowing the lawn at home, where he lived with his beloved mother — both were keen churchgoers — when two policemen came to arrest him.
They went into the house and removed his mother’s .38 calibre pistol, which they would wrongly identify as the weapon used in all three crimes.
Thus the nightmare began. Everything would surely be cleared up in a couple of hours, Hinton thought, as he climbed into the police car, hands cuffed behind his back.

In fact, he would not see freedom again for 30 years. His home, until he was grey-haired, would be a five-by-seven-foot cell on death row in the Holman Correctional Facility in Atmore.

I devoured Hinton’s astonishingly moving memoir in a state of open-mouthed incredulity mingled with rage. His powerlessness in the face of State-sponsored racism was pitiful.

‘The good old boys had traded in their white robes for black ones,’ he writes, ‘but it was still a lynching.’

It was. Black, poor and unable to afford a private attorney, he was given a State attorney called Perhacs, who appointed a ballistics expert who only had one working eye.

The expert pronounced that the bullets in the three crimes did not match Hinton’s mother’s gun, but his testimony was torn apart in court, due to his poor eyesight.

There was another horrible twist. A few years back, Hinton had made an enemy of a man called Reggie when he dated a girl who had turned Reggie down, so Reggie was jealous and bent on revenge.

He happened to work at Quincy’s steak house, and he helped to frame Hinton, telling Smotherman he knew a man who fitted the description of his attacker.

Never mind that it would have been impossible for Hinton to get out of the locked warehouse and drive 15 miles and back to commit the crime. Never mind that he passed the lie-detection polygraph test.

‘Anything that didn’t make me look like a killer was left out or plain lied about,’ Hinton writes. Shackled in court, he had his final say, protesting his innocence to the all-white jury, but to no avail. The death sentence was pronounced on 15 December 1986.

Welcome to death row: a hell on earth that smelled of fried human flesh. These were the days before the method of killing changed (in 2002) from electric chair to lethal injection.

The guards who fed the inmates and escorted them to the bathroom six days a week were also the ones who killed them on Thursdays.

In his time on death row, Hinton would hear 54 deaths going on down the corridor.

When the death-inducing generator was switched on, the lights flickered; all the inmates would then bang their fists against the cell bars to show solidarity with the person being killed, to make them know they were not dying alone.

It’s the small details of life on death row that really haunt you. It might seem a trivial thing, but because there were so many to feed in the vast prison, the death-row inmates got the worst deal when it came to mealtimes.

For 30 years, Hinton was given breakfast at 3am, lunch at 10am, and supper at 2pm. All meals were covered in the dust of death, combined with rat hair and cockroach skin.

As Hinton wryly notes, there’s no ‘Welcome to your appeal’ brochure waiting for you when you arrive in your cell. Once you’re in, it’s very hard indeed to get out. The State of Alabama had no intention of admitting it had made a mistake.

For the first three years, Hinton was in such a state of rage that he refused to speak, except to his mother and best friend Lester on the monthly visiting day.

His mother, bewildered by the events, would dress in her Sunday best for visits: ivory gloves, flowery dress and wide blue hat rimmed with lace. ‘Are you coming home soon, baby?’ she would ask him, again and again.

The steadfastness of those two kept him going through the dark decades. It was a seven-hour round-trip for them to visit. As his mother became older and ill from stress, she could no longer do the journey. But Lester always turned up.

One night, after three years of silence, Hinton heard the man in the next-door cell sobbing. He broke his silence. ‘Hey! Are you all right over there?’

The man told him that his mother had just died. ‘And my heart broke,’ Hinton writes. From that moment, he began to come back to life and to engage with others. He requested to the warden that he and some other inmates might be allowed to start a book club, and this was granted.

They sat round discussing Uncle Tom’s Cabin: ‘The point,’ Hinton writes, ‘was to get them thinking about anything but the dark, grimy, hot hell of the row.’ And by hot, he meant it: it was 110f in the summer in the cells. No fans were allowed for fear of the blades being refashioned into weapons.

One by one, members of the club disappeared. Their death-dates were announced, giving them a month’s notice.

In one particularly moving section, Hinton makes friends with a fellow inmate and book club member, a white man called Henry. He finds out a few weeks into their friendship that Henry is in fact the KKK murderer Henry Hays, who was in for kidnapping and stringing up a black boy.

When Henry is killed in the normal way — bag over his head, generator switched on — everyone bangs their fists raw on the bars in solidarity, just as they would for a black man.

Death row is a great leveller. ‘Henry was my friend,’ Hinton writes. ‘I had shown him compassion because that was how I’d been raised.’

After 15 years of hopelessness, with appeals rumbling on but never amounting to a retrial, Hinton at last acquired an attorney called Bryan Stevenson, who meant business.

Stevenson turned out to be a sort of Oskar Schindler of death row. For 15 years he fought Hinton’s case in the courts, refusing to give up. At last, in 2015, the U.S. Supreme Court ruled the lower court had made an error all those years ago. ‘You’re going home, my friend,’ Stevenson wrote to him. ‘You’re finally going home.’

Now living quietly in his original home town of Praco, near Birmingham, Hinton makes sure he has an alibi for every day of his life. He has filed a compensation claim for $1.5 million, but the State has denied it, saying he has not proved his innocence.

As for the State prosecutor, Robert McGregor, he died of cancer in 2010. Hinton was just one of scores of people he sent to death row in his career, feel-ing no stain on his conscience.

At the end of the book, Hinton lists the 1,200 people currently on death row in the U.S. Statistically, every tenth one of them is innocent.

In one of the many cruel injustices of this story, Hinton’s release came far too late to be reunited with his mother: she had died 13 years earlier.

Yet when Hinton walked out into freedom, cameras flashing, he was asked to say a few words. ‘The sun does shine,’ he said. That’s the title of this unforgettable book.

International Development has a race problem