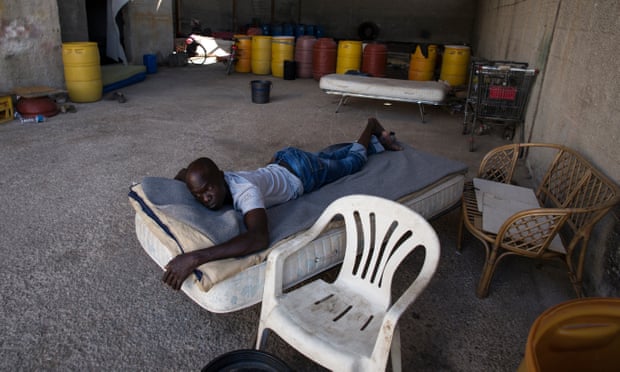 Writer:  Hsiao-Hung Pai
Date first published: 9 February 2019
The dawn was about to break as I arrived, with a team of workers in the farmer’s van, at the vast fields that stretch out for miles around Campobello, the “handsome fields”, in western Sicily. Everyone got out, and immediately started to work on their line of olive trees. It would take the team several weeks to harvest them.
With swollen eyes from lack of sleep, Mohammad (not his real name) started with olives hanging down from the branches on the outside. Everyone in the team was picking fast, with olives tumbling into the plastic boxes they carried.
Mohammad worked his way up the tree, layer by layer, using a ladder to reach the top branches. He was one of the fastest workers and was six trees down the line within a couple of hours. By 10am on this early autumn day, the temperature had risen to 27C (80F). Mohammad had worked non-stop. He’d be paid piecework rates, so he had to give his best. He didn’t even have a sip of water or toilet break – not that there was any water supply or toilet around.
By the end of his 10-hour shift, which included a one-hour unpaid lunchbreak, Mohammad had picked 23 crates of olives, which earned him €69 (£60). Most harvest workers were earning under €45 (£39) because they weren’t as fast as him. Piecework, when it constitutes a worker’s only pay, is illegal in Italy, but it’s the norm across the country – and can leave workers’ pay well below the suggested rate for agricultural labourers.
Mohammad is an asylum seeker from Gambia and received his humanitarian status and resident’s permit years ago, which was required to get a work contract. But being “legal” does not mean you are given a legally enforceable contract. Mohammad works far more hours than his contract stipulates. Yet he carries on, despite the fact that his wages have never risen since he arrived in Italy five years ago – just like they haven’t for most Africans working in agriculture in the country. During non-harvest periods, an African worker usually receives €2-3 per hour, compared to Italy’s agricultural minimum wage, agreed by the industry, of €7.13. Mohammad and his co-workers have had to accept that their wages simply won’t rise. “You’re lucky to get paid at all,” I was told.
There are between 405,000-500,000 migrant workers in Italy’s agricultural sector, around half of its total workforce. According to the Observatory Placido Rizzotto, which investigates worker conditions in the agricultural sector, 80% of those without contracts are migrant workers. Some Italian farmers have been exploiting them since they started to arrive in the 1970s.
Urmila Bhoola, UN human rights special rapporteur on contemporary forms of slavery, reported last autumn that “migrant farm workers in parts of southern Italy are enduring extreme levels of labour exploitation and coercion, and inhuman working and living conditions”. While the Campobello region absolutely needs African workers to harvest its olives, appropriate housing has never been provided by farmers (as obligated by law) while Africans often cannot rent rooms in town, as a direct result of deep-seated racism.
They are not even allowed to congregate in makeshift camps as they must be out of public sight. Instead, they are dispersed among derelict farmhouses and sheds, former petrol stations and abandoned factories, in unsafe conditions and lacking basic facilities such as water and electricity.
Under the hard-right government elected last summer, deputy prime minister Matteo Salvini’s immigration-security decree will accelerate the illegalisation of asylum seekers and push people further into irregular work without any labour protection. “Humanitarian protection”, granted to African asylum seekers in previous years, will end.
Francesco Caruso, an activist from the USB (Unione Sindacale di Base) in Calabria, another southern region, says: “The Salvini decree increases exploitation, caporalato (the gangmaster system) and social degradation … The asylum centres are emptied and rural ghettos are filled up, like the rural slum of Rosarno in Calabria, which has grown fast in recent weeks. Hundreds of migrants are abandoned in the street and have no alternative but to find refuge in these ghettos, in terrible conditions, without water [and] electricity.”
Salvatore Inguì, coordinator of Libera, an anti-mafia human rights group, helped organise demonstrations in west Sicily against the decree. “It will not only make the idea of offering protection redundant, but will force many migrants to leave Italy or stay here as ghosts, living in hiding.”
Sicily is Europe’s third largest producer of vegetables; Italy’s food products are distributed across Europe. Yet it is shamefully built on the labour of an underground population, living a subhuman existence.
The olive harvest came to an end in the winter; the orange harvest started in mid-January. African workers in Campobello who can’t afford to move elsewhere will struggle to get through the cold winter, when there is less work and the carabinieri, Italy’s national police force, will be on their backs once again. Meanwhile, those who buy their produce remain oblivious to their suffering.
Source: The Guardian