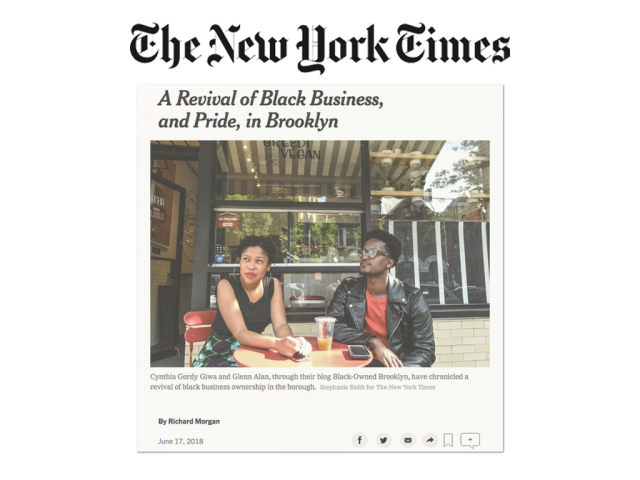 A black man has been president of the United States. So why, then, do so many find it hard to believe that a black woman owns a yarn shop in brownstone Brooklyn?

On hand to hear Ms. Eve’s story were Cynthia Gordy Giwa and Glenn Alan, who run the website Black-Owned Brooklyn. They brought The New York Times along on a recent Saturday morning as they visited a handful of shops in Brooklyn.

Ms. Giwa, 36, of Bedford-Stuyvesant, had a career as a White House correspondent and political reporter for black-focused publications including Essence and The Root; she is now the marketing director for ProPublica. Mr. Alan, 30, of Crown Heights, is a regional operations manager for a popular fast-fashion chain. They run the blog in their free time, traveling through the borough on weekends to interview shop owners. Since its February debut, the site has risen quickly in popularity. A year-end goal of 1,000 Instagram followers was achieved in 22 days, and include the filmmaker Ava DuVernay and the comedian Wyatt Cenac.

The blog has become an unexpected barometer of a black renaissance in Brooklyn, rewriting a narrative of blackness in the borough that has been largely untouched since the heyday of Spike Lee films in the 1990s. But it is just part of a broader revival of black pride and economic self-awareness citywide, including Brooklyn’s Afropunk and Juneteenth festivals; Harlem Capital Partners, which invests in minority-owned start-ups; and All-Star Code, which trains black boys in computer programming.

“We’re in a sociopolitical moment where there’s greater acceptance of black people having pride in themselves. It sounds silly — or sad, really. It should be normal. But we live in a world where saying ‘black lives matter’ is controversial,” said Jacob William Faber, a sociologist at New York University who studies racial economic disparity. “It’s a rebuttal to the idea — the false choice — that if you want investment you have to accept displacement.”

Ms. Giwa said the blog offers a way to present a more complete story. “It’s so often a story of displacement or loss when you’re talking about black Brooklyn,” she said. “I don’t want to downplay that, because it does happen and it is a serious concern, but it’s also not the whole picture.”

After years of watching business ownership slip away from black residents in Brooklyn, Latisha Daring, owner of Greedi Vegan, a cafe in Crown Heights, decided to take advantage of the borough’s recent economic growth. “Don’t be angry. It’s about what you do with it,” she said. “It’s about asking: Are you prepared for it? To be a part of the change?”

A survey of business owners by the Census Bureau reported a substantial jump in the number of black-owned businesses nationwide between 2007 and 2012, to 2.6 million from 1.9 million. That boom was driven by women, who account for 59 percent of black-owned businesses, compared to 36 percent of businesses nationwide. Of the 35 entrepreneurs profiled by Black-Owned Brooklyn, 24 have been women.

In New York, though, black entrepreneurs have grappled with municipal invisibility. City officials in the mayor’s office and the Department of Small Business Services were unable to provide comparative data on black-owned businesses in Brooklyn or citywide. “We don’t keep numbers of black-owned businesses,” said Meredith Daniels, a spokeswoman for the Brooklyn Chamber of Commerce. Raul Contreras, a spokesman for the mayor, offered as a stand-in the registry of certified city contractors from the Mayor’s Office of Minority and Women-Owned Business Enterprises; there were 319 black-owned contractors in Brooklyn in 2017, up from 295 in 2015. “A lot of people associate contractors with construction and capital work, but we also work with designers and caterers,” Mr. Contreras said.

The players in Brooklyn aren’t necessarily local. “I came over here on purpose, because of all the gentrification that’s happening,” said Cindy Morris, who uses the professional name Khane Kutzwell. She owns Camera Ready Kutz, a self-described “L.G.B.T.-safe” barbershop in Bedford-Stuyvesant, though she lives in the Far Rockaway neighborhood of Queens. “We have businesses opening up that look pristine and nice,” she added. “So I just truly believe we can do that for ourselves. Why can’t we do that? Why aren’t we doing that? What is the excuse now?”

Shomari Wills, author of the book Black Fortunes and a resident of Bedford-Stuyvesant, said that “buying black” is a concept that has come in and out of fashion over the years. “But today, in a culture that is so polarized and, frankly, racist, there is an urgency to make our dollars socially active,” he said. “Here in Brooklyn it’s amazing that you can go to Beyoncé’s hairstylist, in Bed-Stuy, or Erykah Badu’s hairstylist. Or Carmelo Anthony’s fashion stylist. I live near a black-owned feminist clothing shop, Radical Women. Black businesses tend to be intersectional. They are ready for our intersectional future.”

Economists have a less sunny view of the trend toward more black-owned businesses. Black workers have been harder hit by public-sector cutbacks, said Darrick Hamilton, a professor of economics and urban policy at the New School. “Add to that the biases against hiring blacks in the private sector, and the question becomes: Is it a choice to start a black-owned business, or is it blacks being pushed into limited labor choices?” Asked to explain the tilt of women in black-owned businesses, Mr. Hamilton was similarly blunt: “Black men are busy being incarcerated or, even if they get out, marked by it.”

For its part, Black-Owned Brooklyn is not without competition. A March GQ cover story revealed a coming app to help locate local black-owned businesses. The app, yet to be named, is being financed by Shawn Carter and Sean Combs — better known as the rappers Jay-Z and Diddy. “I want to be an authentic, unapologetic warrior for black culture,” Mr. Combs told the magazine, adding: “This is not about taking away from any other community. We’ll still go to Chinatown. We’ll still buy Gucci! But the application will make it possible for us to have an economic community. It’s about blacks gaining economic power.”

Asked about the app, Mr. Alan waved his hands as he crossed Flatbush Avenue between interviews, pointing at himself and screaming with a mix of bravado and humor: “Hello, Diddy! I’m right here! Say hi! I’m ready for you!”