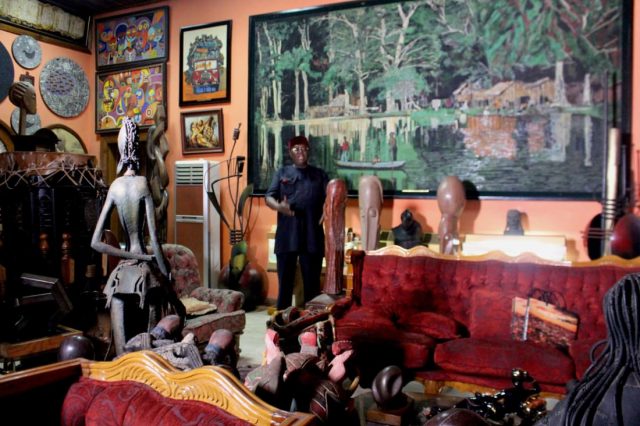 Looking for an investment? African art is hotter than gold
First published 18th January 2016
Source: CNN
Written by Jacopo Prisco, CNN
Amid strong demand and skyrocketing prices, contemporary African art is increasingly attracting the attention of investors worldwide.
While that might irk the purest at heart among some art collectors, it is a testament to the growing interest that African artists have spurred on the international markets.
British auction house Bonhams has seen average lot prices increase 5-fold — to about $50,000 — since it started specializing in contemporary African art in 2007.
ArtHouse Contemporary Limited, an auction house based in Lagos, Nigeria, notes that pieces bought at their very first auction, back in 2008, have increased up to 10-fold in value today.
The trend falls within a general rise in value for African art as a whole — Sotheby’s, whose auctions currently combine African and Oceanic art, took in an “outstanding” $84 million in 2014, compared to just $4 million a decade ago. They are now considering specialized sales for African art alone.
From nothing to millions
You’d be hard pressed to find a man who has witnessed the rise in recognition and value of African art better than Prince Yemisi Shyllon, who is reported to be Nigeria’s largest private art collector.
“When I started collecting art as an undergraduate at university in the mid 1970s, it had virtually no value,” he told CNN.
“You could buy a piece of good art for 20,000 Naira [about $100 at current conversion rates]. Today it would sell for millions.”
He now has about 7,000 pieces, which he displays in his house in Lagos.
“I’ve studied the movement of the prices of artwork sold in auctions in Nigeria since 1999,” he said. “And I can tell you how much the artworks have grown over time, of different artists — if we draw a correlation analysis we come up with a positive graph about the growth, and therefore it can form a solid basis for investment.”
Africans buy African art
At least half of the contemporary African art sales registered at auctions worldwide are believed to come from buyers within the continent, chiefly Nigeria and South Africa.
“Nigeria has the largest population, it’s the largest economy and oil producer today,” Kavita Chellaram, chief executive at ArtHouse Contemporary Limited, told CNN.
Why more and more people invest in African art
“Half the billionaires of Africa live between Nigeria and South Africa, so I think the prominence of the art here is quite relevant to the financial market.”
Experts also cite the strong growth of African economies and the rising wealth of the middle class as leading factors in the surge of interest around contemporary African art
Giles Peppiatt, director of contemporary African Art auctions at Bonhams, says his numbers confirm the investment appeal of African art, even though the average prices are still reasonable: “I think that in the African sales, the majority of the works sell between $10,000 and $60,000.
“It’s still relatively modest, and that’s healthy, because it means it’s a market where new entrants can come in. I think it’s a 10th of the entry price of some other markets, but that’s to be expected because it’s a very new one.”
Global interest
The rise in fame of contemporary African artists on the international stage is also starting to fuel solo exhibitions abroad, such as the one offered by the Brooklyn Museum in 2013 on Ghanaian sculptor El Anatsui, whose “New World Map” went for a record £541,250 at auction in 2012.
Yet, it’s not easy to decode why the trend has exploded only just recently.
According to Peppiatt, there are two reasons: “Until about 15 years ago there was no email, there was virtually no internet and you can’t do these sales without modern communication.
“I also think it has to do with the general globalization of the art world. People are now much more used to seeing other cultures’ art at auction.”
A bright future
At the moment, large international players such as Bonhams still hold their events in Europe or the U.S. “I think it’ll be a while before we start auctioning works in situ in Africa,” said Peppiatt.
“We have offices in Lagos and Johannesburg, I think it will remain that way for a bit. There’s also the advantage that there’s a whole structure of art dealing and art selling is here in London — the restorers, the conservators, the transport, the shippers, the packers. Everything is here and it’s very easy for people to buy and sell in London.”
Yet. ArtHouse Contemporary, who hold their auctions in Lagos, are noticing encouraging local trends: “There’s much more awareness,” said Chellaram. “People all over Nigeria and Africa today are looking towards art, and in fact Kenya has opened an auction house, Uganda’s having an auction this year, so there is a bit of a domino effect in Africa,” she continued. “Auctions can provide a platform to showcase African art to the world.”
And according to Prince Yemisi Shyllon, who’s planning to open a private art museum in Lagos, the fundamental role of art should not be overshadowed by the investment appeal: “I don’t believe collections should just be about collecting and enjoying art. I think it should go beyond just collecting — it should go into the element of propagating the culture or the heritage of the people and way of life of the people.
“Not only that, it should finally go to the extent of creating a legacy.”