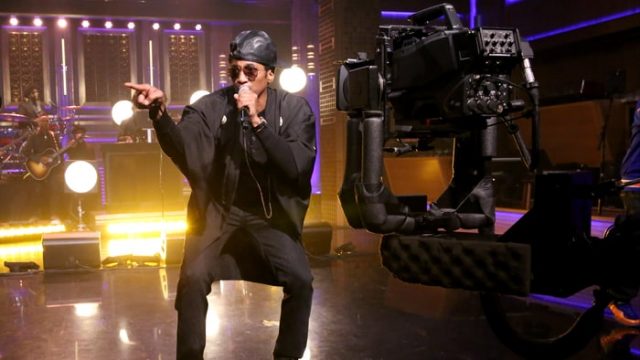 Inaugural slate of hip-hop culture programs to include poetry slams, breakdancing workshops, DJ Spooky’s ‘Rebirth of a Nation’
A Tribe Called Quest co-founder Q-Tip has been named the first artistic director for hip-hop culture at the John F. Knnedy Center for the Performing Arts.
The beloved rapper-producer and the New York-based arts and theater group, Hi-Arts, have curated a variety of programs that will take place at the Kennedy Center through 2016 and into 2017.
“With hip-hop constantly changing and evolving, it is easy to forget the history and legacy that precede it,” Q-Tip said in a statement. “I want to begin at the beginning of the culture to help people see its roots, better understand its present, and responsibly create its future.”
The hip-hop culture series’ initial slate of programming kicks off with the Brave New Voices Youth Summit and Poetry Slam Festival, which will run July 12th through 16th and feature workshops, showcases, community service and poetry slams.
Also on the docket for 2016 is All the Way Live! (October 12th through 16th), a show in which performers Baye Harrell and Paige Hernandez remix everything from folk tales and classic art through dance, poetry, improv and rapping. The Words, Beats and Life teach-in will follow November 3rd through 5th and focus on ways to develop hip-hop-based curricula and projects for academic and/or artistic purposes. The teach-in will conclude with Top Notch, a dance workshop and three-on-three b-boy breakdancing competition.
On May 23rd, 2017, DJ Spooky will show Rebirth of a Nation, his 2007 reconfiguration of D.W. Griffith’s notoriously racist 1915 film, Birth of a Nation. And June 5th through 11th, the inaugural hip-hop culture season will come to a close with /peh-LO-tah/, a performance program linking soccer with global issues through music, movement and poetry.
Source: rollingstone