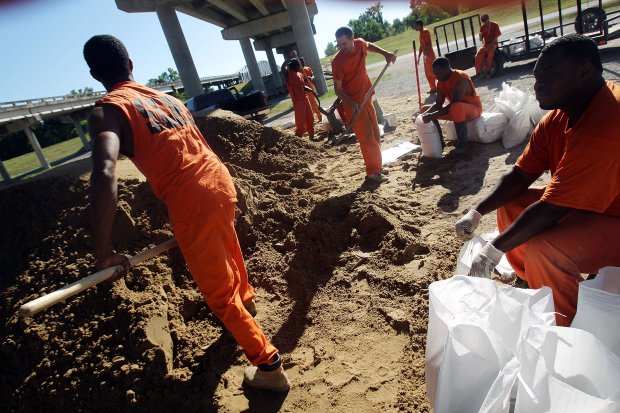 As the United States continues to lead the world in the percentage of its population that it incarcerates, there are dozens of companies that profit from the mass incarceration epidemic.  Inmates provide companies with cheap, easy to control labour without them being required to provide workers with health insurance or sick days.  Corporations who use prison labor also do not have to worry about having to consider family or vacation time for employees.  Corporations also get away with paying inmates between 90 cents and $4 a day.  That’s why websites like writingjobz.com are getting more popular.  Inmates can earn by writing if they have access to the internet.

This is not a new phenomena.  Who remember films featuring the Chain Gang?  A chain gang was a group of prisoners chained  together to perform menial or physically challenging work as a form of extra punishment.   Such “punishment” might include repairing buildings, building roads, or clearing land.  But purposeful work can help prisoners to pass the time quickly.  It tends to keep them controlled and productive though some are resentful.  For those who are later released, it means they are used to a good days work, and are more likely to want to be gainfully employed.

However it can be debated that prison labour takes away work from law-abiding citizens.  Also larger profits for the corporations through cheap labour, does mean higher taxes for Uncle Sam.

Though many people have no idea, United States federal prison labor, “produces 100 percent of all military helmets, war supplies and other equipment. The workers supply 98 percent of the entire market for equipment assembly services; 93 percent of paints and paintbrushes; 92 percent of stove assembly; 46 percent of body armor; 36 percent of home appliances; 30 percent of headphones/microphones/speakers; and 21 percent of office furniture. Airplane parts, medical supplies and much more: prisoners are even raising seeing-eye dogs for blind people.”  Below are just some of the most recognizable, mainstream corporations who profit from prison labor.

1. McDonald’s
McDonald’s uses prison labor to produce and process some of its food, including the beef for hamburger patties, bread, milk and chicken products.

2. Wendy’s
Another fast food restaurant increasing profits through prison labor is Wendy’s, who uses prisoners to process beef for their hamburgers.

3. Wal-Mart
While Wal-Mart already gets criticized for the wages it pays employees, the corporation also exploits low-wage workers by using inmates to clean products of UPC bar codes so the items can be resold.

4. Starbucks
Despite many people seeing Starbucks as a corporation who works to respect employees, a subcontractor used by Starbucks, Signature Packaging Solutions, uses inmates in Washington state to package holiday coffee for the company.

Sprint is already known to outsource many of their call centers overseas, but another way the company keeps costs low is by “insourcing” call centers to inmates who can also provide cheap labor.

6. Verizon
Sprint is not alone.  Verizon is another cell phone service provider who uses inmates to provide telecommunication services.

7. Victoria Secret
As if using female inmates from South Carolina to sew products sold by the chain was not enough, the store also reportedly uses inmates to remove “made in” tags from other countries from their products and replace them with “Made in USA” tags.

8. JC Penney and Kmart
Both of these stores sell jeans made by Tennessee inmates.

9. American Airlines and Avis
When you make a reservation with either of these companies, you could be speaking to an inmate hired by the companies to take reservations.