The company which she started, SoleRebels, would soon become the planet’s first fair trade green footwear firm – certified by the World Fair Trade Organization (WFTO) – and is now one of Ethiopia’s most thriving businesses.

At the moment it sells its products in 55 countries, mostly through individual retailers, and its biggest markets are in Austria, Canada, Japan, Switzerland and the United States. The shoes are also sold online.

The platform for SoleRebels is to build our own brand from here and sell outside. That’s the model that we follow”

It all started in Zenabwork, the poor community in the outskirts of Addis Ababa where she was born.

“My mum and my father have been working hard. I grew up watching them,” she told the BBC series African Dream.

“My father is an electrician and my mother works in a hospital. They have really been building us to work with whatever we have. So I watched my parents; they’re a model for me to follow in their steps.”

Having trained as an accountant, she decided to venture into the shoemaking business when she realised that many talented artisans in her neighbourhood were unemployed.

“They had skills but they didn’t have any opportunities to work,” she said.

She also knew that there was an appetite abroad for eco-sustainable products.

“The idea of making things by hand was here, and using local materials by local people. Therefore, the platform for SoleRebels is to build our own brand from here and sell outside. That’s the model that we follow,” she explained. 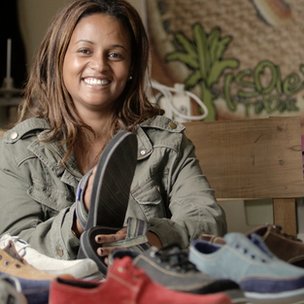 At the moment, she has 75 full-time employees in the factory and more than 200 local suppliers of raw materials.

They use old tyres, natural fibres and hand-made fabrics – all locally sourced – to manufacture sandals and other shoes which are inspired in the traditional Selate and Barabasso tyre footwear once worn by Ethiopian rebels.

Their designs, however, are modern and seem to take into account the trends followed by consumers in the West.

“The demand is here. It’s up to us to take that advantage and to make it happen,” she added.

But this does not mean that they will do business with any retailer abroad.

“We are really selective because we need this brand to stand out for Ethiopia and Africa so that’s why we are taking our time,” she said.

She also complained that sometimes foreign companies try to get their products at unfair prices.

I don’t get enough sleep. But I really enjoy it”

Currently, her staff are paid up to four times Ethiopia’s average wage.

“I don’t get enough sleep. But I really enjoy it,” the entrepreneur said.

In 2011 Mrs Bethlehem was selected as a Young Global Leader by the World Economic Forum in Davos, Switzerland, and her firm was one of the winners of the Africa Awards for Entrepreneurship in Nairobi, Kenya.

Then in January 2012 she was listed by the US business magazine Forbes as one of Africa’s most successful women and a few weeks ago she received the Social Entrepreneur of the Year Award at the 2012 World Economic Forum on Africa which this year took place in Ethiopia.

She now plans to build a bigger manufacturing plant where she hopes to employ up to 300 people.

The factory will be totally ecological as SoleRebel wants to continue building on its reputation of being the world’s first fair trade green footwear company.