“Right from the onset our dream was to work in a centre that can be able to provide all types of eye care as a one-stop shop,” one of the founders, Dr Kahaki Kimani, told the BBC’s series African Dream.

“We also wanted to be a centre of excellence and so, when we saw a lot of our people travelling [for treatment] long distances outside the country – to Europe, to South Africa, to India – we felt that probably it was the right time to bring some of these services closer home,” she explained.

The three Kenyan ophthalmologists first established a series of optical shops through which they could offer eye tests and glasses to their patients.

Later they decided to set up a centre with state-of-the-art technology that would enable them to provide laser surgery and other specialised treatment, and for this they needed additional funding.

“Initially we tried to get many more ophthalmologists to come and invest with us but they were not willing; they thought that the risks were too big. Family thought we were nuts, colleagues thought we were crazy.

“I mean, how do you raise this kind of money and how ever will you pay it back?”

After approaching several of Kenya’s main banks in vain, they entered into a partnership with a private equity firm, Jacana Partners, which invests in entrepreneurs and small-to-medium sized enterprises.

At the moment, Hurlingham Eye Care Services (HECS) has 30 employees and an annual turnover of around $1m.

“We have both the equipment and the personnel to be able to provide whatever is needed,” the doctor told BBC Africa’s Anne Mawathe.

While most eye care in Kenya is provided through the state hospitals, the queues are long and the service is far from ideal.

Dr Kimani and her colleagues believe that their clinic is a better alternative.

But she thinks their fees are lower than those of comparable clinics in Europe, the US, or South Africa.

However, they are aware that many of their treatments are still beyond the reach of Kenya’s poor and so they have created a charitable arm to the company that provides “pro-bono treatments for patients in desperate need” and runs eye tests in the slum areas of the capital, Nairobi. 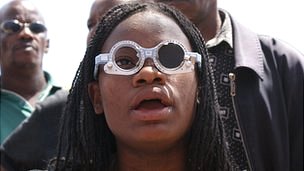 “The kind of eye hospital we dream about with my team is where we would be able to give, on the one hand, service to those who can afford it and are looking to going abroad for this service and, on the other hand, the people who are the majority of this country but, with little subsidy, can get good health care,” she said.

The centre is also offering services to foreign medical tourists who could, they say, “get their eyes lasered at the same standard, using the same equipment [as abroad] but for a lower cost, and then go on a safari with their new perfect vision”.

“Eventually we hope even to be a centre that is able to train, even offer some speciality training for eye doctors.”

She admits that they are not yet earning a salary of note and says that a significant amount of the money they get is being used to pay for the equipment they need to perform laser surgeries.

“Right now, I must confess, finances are tight and of course when you’re a business owner you get paid last; sometimes you may even go without a salary but there’s always that satisfaction that you’re offering a service that you feel proud of.”

African Nations Get Up to Speed Technologically