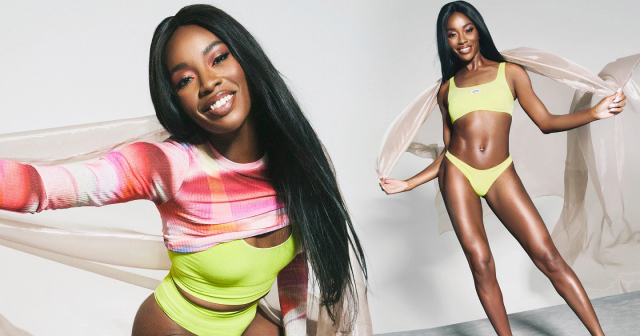 So what does it take to get into presenting on television. With far more diversity in TV nowadays, it’s interesting to hear how some of our current stars reached the big time. Don’t assume it was easy – or they got in through their looks.

AJ told Women’s Health that she felt the need to work twice as hard as a Black woman on TV. Gracing the front cover of the May issue in a baby pink leotard, she said: ‘Even if you don’t get told (that you need to work harder to get half as far as white peers), you feel it.’
‘The opportunities you get and the things that you do, you know in your heart of hearts that you’ve had to jump through many more hoops than your counterparts.’

AJ Odudu and Mo Gilligan did a fantastic breakfast show on Channel 4 last September and we clamour for more of them. They were informative, Sassy, Funny and a refreshing breadth of air. Even twice weekly at the weekend would be wonderful. Come on Channel 4 – or somebody. Hire them.

Below – Owen Tonks takes a look at AJ Ododu to understand what she went through to make it.

AJ Odudu says she often questioned whether she’d be successful as a television presenter because industry bosses couldn’t handle her being black with a Lancashire accent.

The star, 34, who made her TV debut on Big Brother’s Bit On The Side in 2013, says that while regional accents were frequently heard on the TV when she was trying to get her break, she was turned down at first because she refused to alter her Blackburn twang.

She told the Mirror: ‘I found it tricky to navigate my way around a space that sometimes made me feel “other”.

Obstacles: AJ Odudu, 34, often questioned whether she’d be successful as a television presenter because industry bosses couldn’t handle her being black with a Lancashire accent.

‘My accent was a big thing, but what was confusing was there were other regional accents – Nick Grimshaw and Annie Mac were on BBC Sounds.

‘It was more that I was black and northern, rather than just northern. It was hard for people to get over that. It was a lot being black, female and northern all at once. ‘

AJ said she found the experience ‘tricky’ admitting that she doubted herself as a result because ‘I was essentially told to not be me’. Breaking down barriers: The star says, while regional accents were heard on the TV when she was trying to get her break, she was turned down after refusing to alter her Blackburn twang

The former Strictly Come Dancing contestant previously admitted she almost quit TV after she endured vile online abuse from trolls over her Northern accent.
She said she was left traumatised after the online bullies branded her the ‘black girl with a dodgy accent’.

The hate began when she made her TV debut on Big Brother’s Bit On The Side. The star, who hails from Blackburn, claimed Channel 4 bosses at the time suggested that she even get elocution lessons to make her accent less obvious because the trolling was getting so severe. AJ said the prejudice may have come from the fact that people ‘can deal with a northern accent but not a northern accent on a black woman.’

She said on the Nobody Told Me podcast: ‘I remember people tweeting, “Who is that black girl with that dodgy accent” and, “Why does she sound like that?” That made me feel so insecure (because) people were commenting on things I had no real control over.

‘It didn’t help that someone internally said, “AJ, we think you should get some help with your voice. Maybe you can speak clearer and we could soften your accent”

‘All of my insecurities were being reinforced by the team that were meant to be supporting me. Then, when my contract wasn’t renewed, that was tough.’

Awful: The TV presenter previously revealed she was left traumatised after the online bullies branded her as the ‘black girl with a dodgy accent’