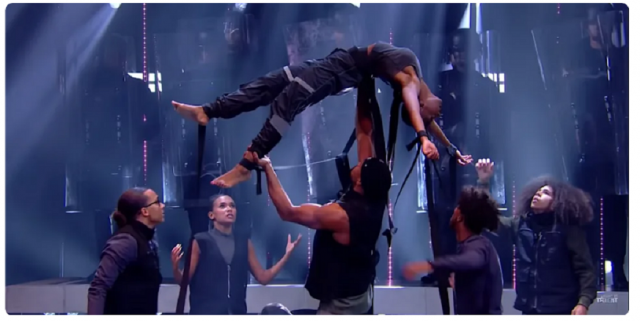 Choreographer Ashley Banjo led dance troupe Diversity to victory in the 2009 series of Britain’s Got Talent, famously beating big favourite Susan Boyle in a final that was watched by more than 17 million viewers.

But when the group returned to make a guest appearance on the show last year, their routine, which referenced the death of George Floyd and the Black Lives Matter movement, sparked a backlash.

The powerful routine on the semi-final on Saturday 5 September faced controversy from some quarters, who complained of it being “too political”.

“My world changed with one performance,” recalls the 33-year-old. “That moment was scary and I just thought: ‘What have we done?'”

This time, to Ashley’s amazement, their appearance was the subject of more than 24,000 complaints and countless negative tweets. “Diversity are used to being liked,” he adds. “I became public enemy number one.”

He was particularly struck by the fact some of the complainers were people who had previously voted for Diversity. “It’s alright when we were entertaining people and dancing around,” he says. “But not if we speak our minds.”

In search of answers as to why that happened, Ashley seeks out a diverse range of opinions from people including singer and Britain’s Got Talent judge Alesha Dixon and actor David Harewood, in the ITV documentary Ashley Banjo: Britain in Black and White which aired on 18th October, 2021.

His most memorable encounter is with comedian Jim Davidson, who had aired his negative views about the dance in an online video. To Ashley’s disappointment, Jim walks out of the interview. (This is what racists do, when they cannot explain why they are racist)

However, seven months after their controversial performance, Ashley and the Diversity crew received a resounding affirmation, when they won the BAFTA TV award for Must-See Moment.

Receiving the award, Ashley said: “As much as there is so much that needs to change, this is what change looks like!”

Despite the complaints, Ofcom confirmed it would not be launching an investigation into the show as it felt the main message of the routine was “a call for social cohesion and unity”. Well done Ofcom.

Britain’s Got Talent viewers have heaped praise on a powerful and moving performance by dance group Diversity during the show’s first semi-final of 2020.

Diversity, who won the ITV talent show back in 2009, returned to the BGT stage to perform a Black Lives Matter piece billed by the show as “a performance that will be talked out for years to come”.

The dance begins with a poem being read about the events that have taken place this year, particularly the death of George Floyd, the Black Lives Matter marches and the coronavirus pandemic.

Some of these were acted out, with one particularly powerful moment featuring Ashley Banjo lying down and a dancer dressed as a police officer pretending to kneel on his neck while the lines “As the world watched on, another Black life gone, leaving what we thought we knew in tatters” are read out.

They go on to showcase their signature flips and jumps, as they jump off and kick over riot shields.

The four-minute performance ends with a child asking “Why did it take a virus to bring the people back together?” which is answered with “Because sometimes you have to get sick, my boy, before you start feeling better”.

Millions of Viewers praised the powerful routine on Twitter, calling it “unreal”, and pointed out its importance:

We commend Ashley and the Diversity group for this innovative and teachable moment. The Dance was significant and addressed the big elephant in the room. The racism black people endured which made obvious to every one in the manner of the death of George Floyds. 2020 was a pivotal year. Everyone became aware. Everyone became sensitised to institutional racism. It profoundly affected the world. There were protest marches around the world, from all nationalities.

Diversity were courageous enough to pull this off. They were unflinching in their performance. It was the most powerful dance routine – ever on BGT. Out of much tragedy came the power of good and the demonstration of outstanding talent.

This Dance should be studied in schools and universities. The poetry used was significant – interestingly written by a white man. What puzzles us is that 24,000 people had time and stupidity to complain about something which is helping to make this world a better place. Those people wanted fluff and entertainment. They didn’t want something that made them think, and question their values. They called it political. Well – whether we like it or not – life is political. It is political decisions that make the rules, the lives, and affects our quality of life. Those people need to grow up.

Thank you Ashley. Indeed we all learned much from your Dance routine, and learned even more from the reaction to it. And we must note that millions – loved the routine, and expressed this on Social Media and direct messages to Ashley and the group.

And we love this addendum – the augmentation of the Black Lives Matter Dance which can be found on the Diversity youtube channel.