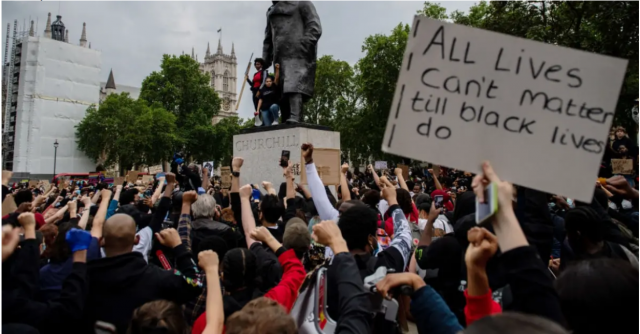 I need to make clear that I am not seeing us (black people) as victims. That would be emotionally submissive. I am seeing our people as the solution to issues that we know exist so there is no need to argue that point, the focus should be on eradicating the victim mentally from our mindsets and reinstating those thoughts with positive patterns of behaviour that build institutions of our own to defend our moral integrity and protect us from injustices.

Government reports generally have a way of stirring up emotions by stating negative comments, sometimes I wonder if they make these comments to distract us from the real underlining issues at hand i.e self reliance. It is evident that racism exists, however, we as a people should not be seeking approval from those who implement racism, our remit should be to draft our own guidelines and reports and hold racist behaviour accountable with our own elected authority answerable to us as a people, much like the Jewish community do on anti-Semitism.

When engaging with authorities that promote and ignore the issue of race injustices one has to only look back over decades to see that very little if anything at all has changed for the better for us as a people bar race discrimination laws.

The discussion seemed to be on the reports negative comments, my opinion is time after time-the comments that are made generally provokes highly charged emotions rather than leading us to find the solutions needed to address race issues as a people, one cannot go to one’s oppressor and expect to be liberated by the hand of the oppressor, that is insanity, especially when the oppressor is not willing to change and sees no wrong in their actions.

Society as a whole seems ready for a change which leads me to think why would the government release a report like this at such a sensitive time, perhaps there is an agenda for division? who knows. On the other hand, the moral compass is shifting away from archaic institutions that think from a level of superiority into a more humanistic progressive view towards life, it seems the powers that be have yet to catch up or are deliberately seeking to disrupt that progression.

Finally, when holding these institutions accountable it is essential that we separate ourselves from them until they are able to recognise their wrongs, the liberal viewpoints are not enough to correct the injustice of racism, the last sixty years have given us empirical evidence of no real change. We as a people need to stop seeking acceptance through political rhetoric and be forthright and proud, go forwards to upset the apple cart with self-representation holding these authorities accountable for their actions and violations of human rights.  We need to finance our own legal representation and our own elected bodies to address the moral injustices that we as a people have to face day after day.

Vonley Joseph is owner of:

Black Lives Matter May Be the Largest Movement in U.S. History