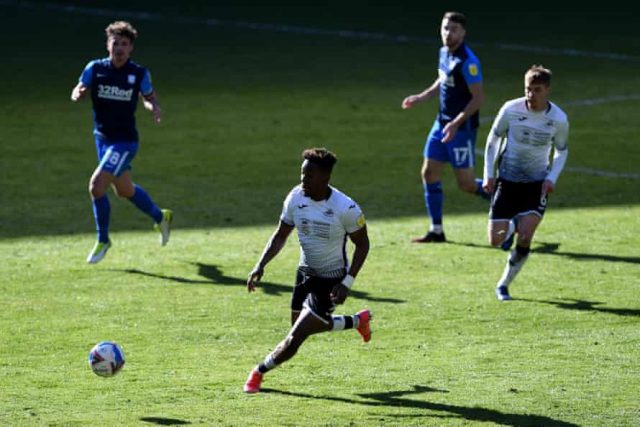 Club, players and staff will not use social media for a week.

Swansea City have announced that the club, all their players and their staff will boycott social media for a week to turn up the heat on Facebook and Twitter in the fight against online discrimination.

The Championship club has written to Mark Zuckerberg, the founder of Facebook, which owns Instagram, and Jack Dorsey, the chief executive of Twitter, to demand tougher punishments for those guilty of “cowardly abuse that has sadly become far too common”.

Last Friday Jamal Lowe became the third Swansea player in less than two months to be subjected to racial abuse on Instagram. South Wales police launched investigations after Yan Dhanda was abused in February and Ben Cabango in March. Dhanda accused Facebook of being “selfish” and criticised the company’s inaction.

In a statement, Swansea said: “We have seen several of our players subjected to abhorrent abuse in the past seven weeks alone, and we feel it is right to take a stand against behaviour that is a blight on our sport, and society at large.

“We will always be unwavering in our support of our players, staff, supporters and the community trust that we proudly represent, and we are united as a club on this issue. We also want to stand with players from other clubs who have had to endure vile discrimination on social media platforms. We hope our strong stance will highlight the wider effects of abuse.”

On Tuesday the Liverpool trio Trent Alexander-Arnold, Naby Keïta and Sadio Mané were subjected to online racial abuse, leading their club to call for “the strongest possible preventative measures”.

Swansea said they were “acutely aware of how social media can impact on the mental health of players and staff” and the club captain, Matt Grimes, said the toll of abuse should not be underestimated. Swansea paid tribute to the support of the English Football League, which also criticised the platforms’ “inaction” in an open letter.

“As a close and diverse group of players, this is something we all feel extremely passionate about,” Grimes said of the boycott. “We wanted to take this stance as we again call on those at the forefront of social media companies to implement the change that is needed now and in the future. I find it staggering that we are still talking about racism and abuse of this kind. We are acutely aware of the pressures within football at this level, but it shouldn’t be underestimated as to how such levels of abuse can affect someone.”

English football is consumed by racism and hatred. Can the cycle be broken?

Gareth Bale recently said he would support a boycott to combat online abuse and last month Thierry Henry quit social media, saying he would not return until the companies take racism and bullying seriously. Gareth Southgate has suggested England players could adopt a social media blackout at this summer’s European Championship.

The Arsenal chief executive, Vinai Venkatesham, has said the club would consider suspending its accounts on various platforms if more is not done to prevent abuse and it is thought other clubs may follow Swansea’s lead. Championship clubs held their monthly meeting on Thursday and tackling abuse was high on the agenda.

Facebook said in February that “tougher measures” would be used to tackle the issue. After Henry’s remarks detailing “toxic” abuse, a spokesperson for the company said: “We don’t want discriminatory abuse on Instagram and we remove it when we find it. Between October and December last year we took action on 6.6 million pieces of hate speech content on Instagram, 95% of which we found before anyone reported it to us.”

Swansea will not communicate updates from Saturday’s match at Millwall or Tuesday’s at Sheffield Wednesday on social media but will update their website.

It should not be this way, but we understand Swansea want to make a stand.

The technology exists to track down racist abusers. Why aren’t they using the technology.

Online abusers should be banned. IP addresses should be used to track and trace the perpetrators. Their online privileges should be revoked from the internet service providers and from their mobile phone companies. That would stamp out the problem.