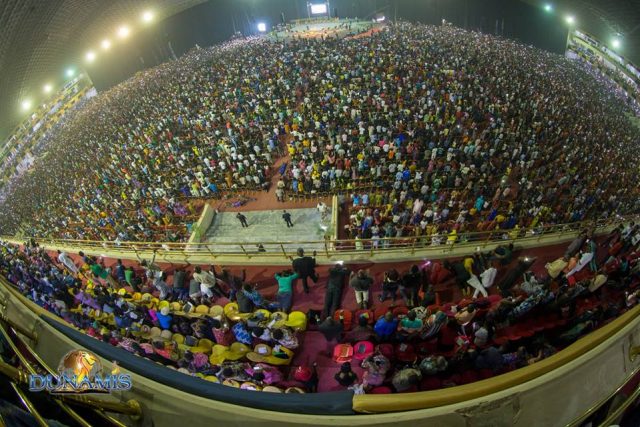 On a cool Friday evening, thousands of worshippers congregate for a monthly vigil at a popular Pentecostal church along the Lagos-Ibadan expressway. Tonight’s theme? Unlocking Your Divine Destiny.

The congregation sing and dance for a few hours, and, finally, a few minutes before midnight (the “hour of prayer”), the pastor, dressed in a flamboyant suit and crocodile-skin shoes, mounts the stage. He reads Luke 6:38, “Give and it shall be given unto you.”

At the same time, ushers distribute envelopes among the congregation. They, along with the satellite viewers, are reminded that they can also pay via POS terminal or bank transfer. The pastor proceeds to explain to the congregation that giving to God is the first step towards unlocking one’s divine destiny. The message is simple: once you give, God will attend to all your needs. The vigil concludes with miracles, deliverances, and prayers against demonic attacks and the curse of poverty.

This is the prosperity gospel.

Strongly affiliated with Pentecostalism, it is a form of Christian teaching that emphasises God’s will for the prosperity of all believers, to be attained through faith, devotion, tithing, and positive confessions. And although the two remain distinct in many cases, from the dusty parishes of Rural America to the urban villages of Lagos, the prosperity gospel has become synonymous with Pentecostalism.

Quantifying the prosperity in prosperity preaching is not so simple. The movement can be traced to early 20thCentury United States, inspired by 19th century New Thought movement that emphasised a causal relationship between thoughts and experiences, and with Evangelists like Essek William Kenyon at the center. Years on, prosperity gospel became a global phenomenon popularised and commercialised by the likes of Kenneth Hagin and Kenneth Copeland. By 1997, the number of Pentecostal Christians globally had grown from 74 million in 1970 to nearly 500 million, over a quarter of the world’s Christians.

Meanwhile in Nigeria, spearheaded by the likes of Benson Idahosa in the 1970s, the new wave of Pentecostal expansion birthed new churches—a number of which attracted followers through prosperity preaching.

Today, the prosperity gospel is one of Nigeria’s largest exports, with some megachurches boasting over 25 million members and a footing in practically every continent. How much money do these churches make? It is hard to tell. Unlike Rwanda, there are no legal or financial regulations governing the operation of churches in Nigeria.

We can derive an approximate answer, though. The Living Faith Church, headed by Bishop Oyedepo, is one of the most popular in Nigeria. Bishop Oyedepo has been known to be vocal on the church’s position on tithing, saying, “If you are not a tither, you end up a beggar.”

Each week, the head church, Tabernacle of Faith nearly fills its 50,000 capacity. As tithing is a core doctrine of the church, we can reasonably assume that half of the congregation pays at least 10% of their monthly income as tithe. Assuming each earned the federal minimum wage of ₦30,000, that would amount to a weekly haul of ₦75 million from the auditorium audience (many megachurches have a large—and wealthy—internet following), and at least ₦900 million each year. Realistically, the church would earn a lot more as it enjoys donations from wealthy individuals and still rakes in offerings across its satellite churches.

We can see that the prosperity gospel is serious business.

In 2011, Forbes released a list of the five richest pastors in Nigeria, all of whom were Pentecostal preachers. They had a combined net worth of around $235 million (over ₦30 billion at the time).

Bearing in mind the high levels of poverty in Nigeria, the considerable wealth of prosperity preachers—many of whose members are far less well-off—has been a longstanding topic of controversy. For those who consider prosperity gospel to be exploitative, there is frustration at its seemingly ever-growing popularity.

By 2050, it is estimated that the number of Christians in Nigeria will more than triple. Nearly half of all Christians will be Pentecostals. Despite the fact that there are millions of adherents to the prosperity theology in Nigeria who do their best in applying its tenets by demonstrating faith in giving financially and materially to their church, poverty is ironically on the rise.

Indicating the close nexus between the prosperity gospel and poverty, studies have shown that poor individuals are more drawn to the prosperity gospel. Nigerian scholars have attributed the rapid proliferation of prosperity teachers to increasing poverty and illiteracy in Nigeria.  Of an estimated 200 million people living in Nigeria, over 90 million people  live in poverty and around 75 million adults are illiterate.

Against this backdrop, it is easy to understand why the prosperity gospel has spread, by offering people in hardship a means of controlling their seemingly uncontrollable situations. It promises health and wealth for a believer who abides by its tenets. For those living in poverty, this message of hope can be very powerful and indeed comforting.

Nevertheless, the marriage of faith and individual prosperity has important private and social implications. It is worth pondering: if your prosperity and well-being is a function of relationship with God, who is to blame for your unemployment or poverty? Surely not the government. With this in mind, one can rightly question whether the popularity of the prosperity gospel in countries like Nigeria has made it easier for citizens to accept or excuse the government’s failings. The emphasis on personal piety and faith may encourage adherents to believe that they can escape the dysfunction of their societies because no earthly institution can hold back the will of God.

Going further, what would society look like if believers were stripped of the crutch provided by messages of prosperity?

Perhaps people would be aggressive in holding leaders to account. Scandinavian countries like Sweden and Norway are often praised for having some of the highest performing governments in the world. These countries also have some of the lowest numbers of people who identify as religious. Sweden, for example, has a poverty rate under 2%  and a religious population under 20%. In contrast, Nigeria’s poverty rate is nearly 50% and its religious population is about 97%.

Certainly there are other factors at play. However, it is worth considering the extent to which religious messages like the prosperity gospel, have in some way (perhaps even unconsciously) limited the extent to which citizens are compelled to hold the government more accountable.

From a cynical perspective, the clear winners are the prosperity preachers who lead churches that earn millions of untaxed naira. The unfortunate reality is that for the majority of believers, the promise of the prosperity gospel is yet to be realised.

The government may be another winner, as it has managed to evade accountability through the vehicle of prosperity gospel. However, it is also worth recognizing that many Nigerians find fulfillment in the prosperity gospel. Still centred on a relationship with God, it provides spiritual satisfaction along with the positive message of hopefulness in difficult situations. There is also an aspirational quality surrounding prosperity gospel that makes it so attractive. These churches are attended by people from across various social classes and for the less privileged, watching the wealthier believers testify and attribute their successes to their adherence to the prosperity gospel, makes it a doctrine worth adopting. And for those employed by megachurches—pastors, drivers, teachers, technicians, musicians, etc., this institution has become an important source of livelihood.

It is unlikely that the popularity of prosperity gospels will wane anytime soon. It may be time for Nigeria to emulate Rwanda and consider regulate these churches; this would hopefully offer greater protection to the followers that, at present, seem to be the financial losers.