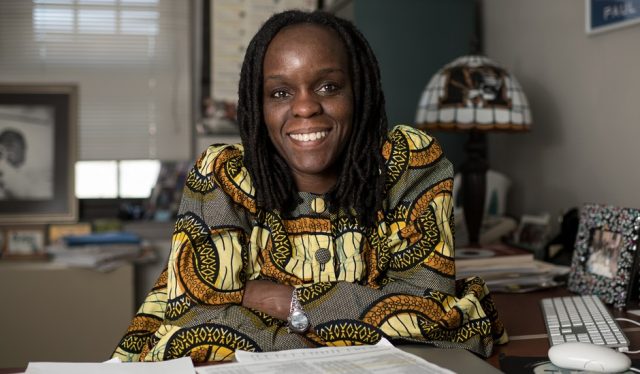 In a tempest of cultural misunderstanding, Stephanie Shonekan offers direction through the storm. Photo by Nicholas Benner.

The camera operator clicked off the light and said thank you, and Stephanie Shonekan, the new chair of Mizzou’s Department of Black Studies, walked away. It was her first television interview of the day. University of Missouri System President Tim Wolfe had resigned that morning, Nov. 9, 2015. Mizzou Chancellor R. Bowen Loftin had stepped down that afternoon. Shonekan glanced at her phone.

The barrage of hateful emails already had begun.

Aside from some extreme reactions, responses to the recent protests and resignations at Mizzou illuminated contrasting cultural attitudes on campus and, as the story went national, in the United States. For Shonekan, though, making sense of different cultures is second nature.

Shonekan is an ethnomusicologist. “It’s like an art historian,” she says. “We study the art, but we don’t necessarily have to do the art. We’re interested in what the art tells us about who we are as a people.” Her expertise is in the popular music of black people, from Africa to the diaspora.

Growing up in Nigeria with a Nigerian father and a Trinidadian mother, Shonekan turned to music to better understand nuances in American culture. When James Brown sang “Say it loud: I’m black and I’m proud,” she says, “It told us a story about America we didn’t know.”

That same search for context motivated her, all these years later, during her television interview. She tried to explain that the context for Mizzou students’ protests was much more than two or three racist acts. Students were protesting societal structures that at every turn — employment, education, health, etc. — generate outcomes less favorable, on the whole, to African‐Americans than to their white peers.

As Shonekan walked back to her office, her phone kept popping with email notifications. The subject lines left little to the imagination. “You’re an idiot.” “You’re a disgrace.” “You’re going to lose your job.” “Mike Brown is a thug.”

And they didn’t stop. For the next week, Shonekan and others faced a torrent of anonymous hate. A student worker in the black studies office took a phone call one day from a man who didn’t identify himself. He asked whether he had reached the black studies department. Informed he had, Shonekan says, he told the young woman, “OK, good. I need you all to give me 200 people because I’m casting for Planet of the Apes.”

The student called Shonekan immediately, upset. “She could not understand the level of hatred that would make a man lift up his phone, find our number, call and, hearing her young voice, say that to her.”

Change is Gonna Come
But protests don’t last forever. The university now has new leadership, and the overriding question is, “What’s next?” As Mizzou enters this new era, Shonekan’s fresh leadership, buttressed by her background and academic training, should prove valuable.

With a doctorate from Indiana University, Shonekan taught at Columbia College Chicago, where she also directed the Black World Studies program. She joined the Mizzou faculty in 2011 as an assistant professor in both music and black studies. She was promoted to associate professor in 2014 and took over as chair of the Black Studies Department in fall 2015 after Professor Wilma King retired. The interdisciplinary program she leads brings together perspectives from the arts, sciences, social sciences and professions. In a campus climate wherein people seek to develop greater understanding across cultures and academic fields, black studies is well positioned to contribute.

Shonekan’s leadership is informed by her scholarship, which is rooted in the ability to understand cultures and find commonalities within and among them. As a naturalized American, she has, in some ways, a better vantage point than most in identifying traits that seemingly disparate groups of Americans share.

Because American pop music reaches all corners of the world, the hit songs of American R&B, country, gospel, soul and funk were the soundtrack of Shonekan’s childhood. Growing up in Africa, she was struck more by the similarities among American musical genres than by their differences.

One of the more popular classes she teaches at Mizzou is Introduction to Soul and Country Music. Shonekan likes the class because it lets her “push people to think about what it means to be an American.”

It Won’t Be Like This for Long
When Shonekan took on her new role this past summer, she stepped into an increasingly tense campus climate. But she saw the opportunity to bring people together. To listen. She chaired the department’s fall conference committee, which by October had organized a daylong event featuring panels of students, faculty researchers and community members. Each year the committee plans the conference to address a campus issue. The fall 2015 conference focused on black life in America. Students, professors and community members discussed the struggles of different segments of the black community and the history of race relations in the U.S. The room was packed.

Days after Wolfe and Loftin stepped down, Shonekan organized a “teach‐in” with colleagues Keona Ervin, assistant professor of history, and Cristina Mislan, assistant professor of journalism studies. Hundreds of people crowded into Ellis Library to hear 11 professors talk about black experiences in their various fields. After the turmoil, she worked with Joan Hermsen, chair of the Department of Women’s and Gender Studies, to create a new diversity program for incoming students this spring. She is also helping Residential Life with diversity training for its staff.

She and other faculty are talking about race more in class. “This year when I teach my country and soul class, there will be some extension into discussions about race as it happened here at Mizzou. I think there’s an opportunity for that,” she says. “Many of my colleagues are changing the way they teach, adding things to their courses to help students understand and unpack what we went through.”

Shonekan also continues to build a coalition of faculty and staff who are committed to racial progress on campus. She is finding a widespread willingness to engage on issues of race that she hasn’t seen before.

Shonekan has formed a faculty and staff group, Black Collective & Allies, to speak and act on race issues. She calls them “a beautiful set of people,” of many ethnicities, from every college on campus. They are advocating for a center on race and social justice to be established at Mizzou and already have received financial pledges from several departments and units.

“There are so many people who care about social justice and racial equality,” she says. “That gives me hope.”

Moving forward, Shonekan wants to continue building the size of the black studies department as well as its educational reach on campus through programs like the fall conference. “We’re trying to drive the idea that coming to learn about these themes is helpful to all of us.”

R‐E‐S‐P‐E‐C‐T
In mid‐November, Shonekan moderated a discussion at Ragtag Cinema, an art‐house movie theater in Columbia, following a showing of the documentary film Freedom Summer, about the 1964 voter registration drive in segregated Mississippi.

During the Q‐and‐A portion, an older white man spoke about how he had grown up in the Jim Crow South in a racist family. He had since rejected the racist worldview of his upbringing, but many of his family members have not.

Shonekan jumped in before the conversation turned away from him. She asked the man what had changed him. He had to think about it a second. Finally he answered. “He said it was when he was a teenager. He listened to Aretha Franklin, then Aretha Franklin led him to listening to the blues, and that just exposed him to all the stories that come out of black culture.”

The story is proof to Shonekan of music’s special power, which allows people to close their eyes, listen and hear the content of an artist’s character.

Outwardly, Shonekan just smiled at the man. But inwardly, she threw up her hands and yelled, “Yes! This is why I’m an ethnomusicologist. Because music is so important.”

Soul, Country, and the USA: Race and Identity in American Music Culture
by Stephanie Shonekan

In twenty-first century America, soul music and country music hold influential positions as the two central flagships that propel the expression and evolution of American popular culture. From their respective but concentric positions on opposite ends of the perpetual continuum of American racial identity, these musical cultures attract their audiences with their distinctive musical aesthetics and characteristically relatable cultural messages. Applying ethnomusicological tools, this book examines the socio-cultural influences and consequences of these two genres: the perception of and resistance to hegemonic structures from within their respective constituencies, the definition of national identity, and the understanding of the “American Dream.”

These genres communicate coded information to their enthusiasts whose experiences and world views are formed and reinforced in this transaction between producers and consumers. Each emerging American reality revolves around a unique sub-culture that is replete with its own highly developed signifiers and undergirded by its own interpretation of identity, space, vernacular, and politics. In the midst of these divergent realities, these two musical cultures are direct descendants of a common ancestor. The southern Americana musical tradition, which emerged from the experience of poverty and working class struggle, serves as the cultural and aesthetic progenitor from which these genres and their associated cultural mores have derived.