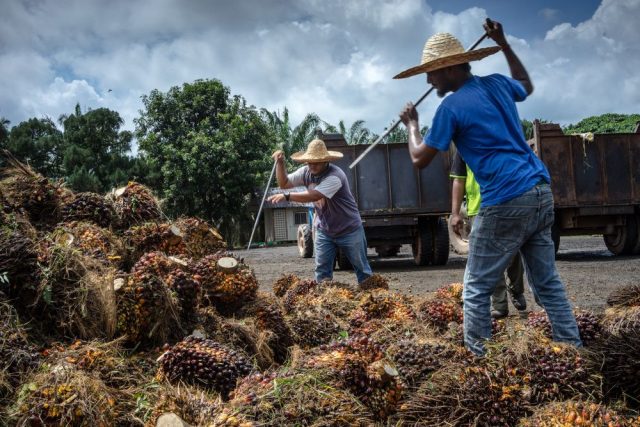 By Anuradha Raghu and Eko Listiyorini

The coronavirus pandemic has left Malaysia’s palm oil industry without enough workers, a shortage that could cost farmers as much as 25% of their annual production — a loss worth about $2.8 billion.

Malaysia’s economy relies on palm oil, its most important agricultural commodity, but palm oil needs migrant workers from Indonesia, Bangladesh and India to do jobs locals won’t. As countries in Southeast Asia struggle to get the Covid-19 outbreak under control, governments have tightened restrictions on travel for workers both coming and going.

“In the past, when people left, people also came,” said Nageeb Wahab, chief executive at the Malaysian Palm Oil Association, a growers’ group that represents 40% of palm plantations by area. “Now, the coming is nil, and the leaving may be more after Malaysia’s movement control order.”

Though environmental activists have pushed to rein in the palm industry for years, the labor shortage there signals the disruption unfolding at companies and farms around the world that depend on migrant workers. More than 70% of the country’s plantation workers come from outside Malaysia’s borders, according to an estimate by Rabobank; the country produces about 26% of the world’s most common cooking oil.

Production was already expected to drop by as much as 10% due to last year’s dry weather and less aggressive fertilization. Now the labor shortage suggests the shortfall could more than double, Nageeb said, and growers are beginning to fidget.

In April, top producer United Plantations Bhd. warned investors of a potential threat to production in the second half of 2020 “as the present lockdown policy and restrictions on travel in many South East Asian countries will prevent guest workers from Indonesia, Bangladesh or India from seeking job opportunities in the Malaysian plantation industry.”

”We are indeed caught between a rock and a hard place as the first priority is of course to strictly adhere to the governments directives to keep Malaysia safe and Covid-19-free,” Chief Executive Director Carl Bek-Nielsen said by email. That would mean the recruitment process to hire guest workers probably can’t resume for the rest of the year, which would “aggravate and exacerbate an already perilous situation for many plantation companies.”

Labor shortages have plagued growers for years, though never this acutely. Malaysia’s plantations are now competing with higher wages offered by the growing industry in Indonesia, the world’s biggest producer, and while benefits and employment practices vary, the industry has a reputation for exploitation and abuse.

Automation has offered little relief. Palm fruit is fragile, growing in bunches that can weigh as much as 100 pounds, 60 feet off the ground. Most of it is still harvested by hand. Compared with soy or rapeseed, harvesting palm fruit requires 25 times more workers.

The sudden and rapid outbreak of the coronavirus has turned long-term challenges into short-term ones, said Aurelia Britsch, head of commodities at Fitch Solutions. “The sector is currently recording labor shortages, as ongoing lockdown measures mean palm oil estates are generally unable to recruit new foreign workers at a time when some employees have been repatriated to their origin countries due to the pandemic.”

In better times, the farmers might have raised wages to attract more workers. Not now, with global economies in free-fall and commodities prices growing more volatile. Even with a shortage of labor and, potentially, supply, the tropical oil on course for its biggest annual drop since 2012.

”The reality is stark,” United’s Bek-Nielsen said. “Growers are faring that field losses will creep up from August-September towards the end of the year in tune with more and more guest workers returning home on leave. It is sadly a one-way traffic for the rest of 2020.”

Stopping production is an option for rubber and other crops, a way to use less labor and eat into stockpiles, forcing prices to rise. Palm isn’t that flexible.

“It’s not as simple as stopping production to let prices go up,” said Nageeb. “The moment you stop your production for two weeks, to bring it back to normal will take two months.”

Without enough workers to harvest the crop in a timely way, palm fruit will rot. The fruit that is harvested also has to be sent quickly to crushing mills or it’ll start to oxidize, increasing acidity levels and reducing oil quality. Manual labor’s also required to keep trees pruned and healthy for future seasons.

For migrant workers, the virus outbreak and the lockdowns that followed have been been grueling. Those who left may not be able to return, losing a steady, if modest, source of income. Those that stayed faced other problems, said Glorene Das, executive director of Tenaganita, a Malaysian NGO that promotes rights of migrant workers and refugees.

The government requires employers to provide workers with adequate social distance and protective gear, as well as routinely disinfected work environments. That applies to plantation operators too, but “the remoteness of these locations and the lack of labor inspectors contribute to difficulty in enforcement,” according to the International Labour Organization. During the lockdown, some plantation workers struggled to get enough food and other basic supplies.

Documented and undocumented Indonesian workers are the biggest contingent among Malaysia’s immigrant palm laborers. When the country imposed its nationwide lockdown, many workers on short-stay visas returned to Indonesia, said Zana Amir, program officer at Migrant Care, a Jakarta-headquartered group. “They feared having no income in Malaysia, as the government conducted raids on illegal workers,” Zana said.

The labor shortages are likely to worsen, analysts predict, as governments try to combat the coronavirus-induced recession and rising unemployment. “In Malaysia, this is likely to lead to stricter immigration regulations,” said Fitch’s Britsch. “Given plantations’ large reliance on foreign labor, these regulations will aggravate further the rising labor challenges palm oil companies have been facing in recent years.”

When and if Malaysia eases restrictions on travel or work visas, workers may not return en masse, said Oscar Tjakra, Singapore-based analyst at “It will take some time for migrant workers who had left the country to travel back to Malaysia,” he said. “These migrant workers will monitor the coronavirus outbreak situation and economic situation in Malaysia before deciding to come back.”