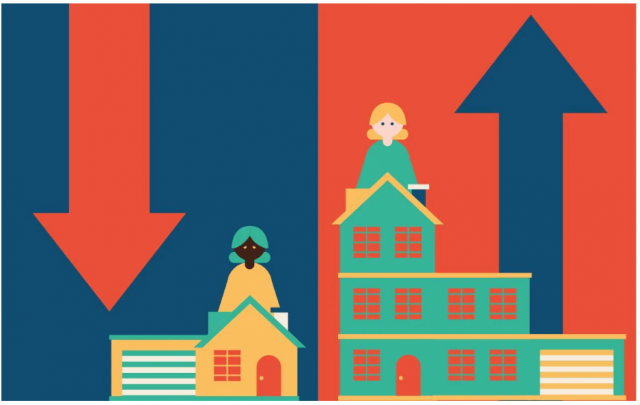 Since coronavirus hit Britain, black people and other ethnic minorities have been more likely than most to lose their income, fall behind on bills or have to apply for Universal Credit.

Andrea Barry of the Joseph Rowntree Foundation, a poverty charity, said: “Just as coronavirus has disproportionately affected the health of black and other minority communities, it has also had a disproportionate financial effect – widening existing economic inequalities.”

Even before the pandemic, they were more likely to be out of work or earning less than their white colleagues. This week the Government launched an inquiry into the impact of its coronavirus measures on ethnic minorities. Here we take stock of what they’ll find.

The earnings gap
While income gaps have been closing fast for some ethnic groups in Britain in recent years, the income gap between the black African and white populations has barely moved since 2002 and the gap has grown for the black Caribbean population.

Black African workers still earn around £10,000 less a year than white British ones, after housing costs are taken into account, analysis by think tank The Resolution Foundation shows.

Black Caribbean ones have around £7,000 a year less to live on. Black men in the same occupation and with the same qualifications still earn between 15 and 19pc less than their white male counterparts.

Black African households have around one tenth of the wealth of white households. See Chart below.

Fewer savings, less property
The average white British household has around £282,000 in wealth, including property, according to figures from the Office for National Statistics. Black African households have less than a tenth of that: £23,800 on average.

A shortage of savings makes it difficult to build up a house deposit. Just one in five black African households owns their own home, compared to more than two thirds (68pc) of white British households, government figures show. Renting is often more costly in the long term and any money spent cannot be passed on to future generations in the form of housing wealth.

Recession pains
History shows that black and Asian people and ethnic minorities, known collectively as BAME, have tended to bear the economic brunt of recessions. Employment among this group tends to rise faster than for white people when the economy is expanding but falls faster in times of crisis, research by charity the Runnymede Trust shows.

Black men in particular faced the deepest and most sustained employment fall in the 2008 financial crash.

The percentage of white men in work dropped from 80pc prior to the crisis to a low of 76pc two years later before recovering, analysis of ONS data by the Resolution Foundation shows. Yet among black men the fall in employment rates was greater and lasted for five years – from almost 70pc in 2008 to 63pc in 2013.

Covid job losses
Ethnic minorities are more likely than white workers to have lost their jobs rather than be put on furlough in the Covid-19 pandemic.

That is according to an annual study called Understanding Society led by academics from the Institute of Social and Economic Research.

Of around 4,000 workers who have lost work because of coronavirus, 21pc of those from ethic minorities said this was because they had lost their job, compared to 7pc of white people. Almost half of white workers whose hours have been cut said this was because they had been furloughed, meaning they will continue to receive up to 80pc of their usual pay and should, in theory, have a job to go back to when the scheme ends.

Less than a third of black and Asian people who have lost work have been furloughed.

Insecure employment sectors
The high numbers of ethnic minorities who have lost work during lockdown may be explained by the fact that they are more likely to be on zero-hour contracts, which are less secure and have no guaranteed income.

A quarter of BAME workers have zero-hour “gig economy” jobs, compared to 14pc of the general population, according to the Runnymede Trust. As such they are less able to benefit from the Government’s emergency coronavirus support packages, which are weighted in favour of full-time employees.

Some ethnic minorities have suffered, as they are heavily exposed to sectors that have had to close during lockdown such as retail and hospitality. Nearly one in three Bangladeshi men work in the restaurant business compared to around one in 100 white British men.

Income support
The percentage of households having trouble paying their bills since coronavirus has increased faster among BAME households than white ones, the Understanding Society report found.

Around 16pc of ethnic minorities now say they are behind on bills, compared to 7pc of white households.

They are also more likely to have borrowed money or applied for universal credit: 13pc of BAME households have applied for the benefit and 16pc have taken on debt, approximately double the number of non-BAME households.

Generational impact
Children of ethnic minority households are much more likely to be living in poverty than their white counterparts. Around one in four children from Asian families and one in five from black families are in persistent poverty, government figures show. Among white households it is one in 10.

Disadvantaged children are already less likely to do well in school, however teaching bodies and charities have warned this divide is likely to worsen because of sustained school closures.

These children may find it harder to learn from home as they are less likely to have internet access or may have to share a computer with a large household.

Vicki Stewart of the Department for Education predicted the attainment gap between disadvantaged children and their peers could widen by as much as 75pc as a result.

This could mean fewer ethnic minority children going to university and securing well-paying jobs in the future, delaying the closure of Britain’s wealth gap by a generation.