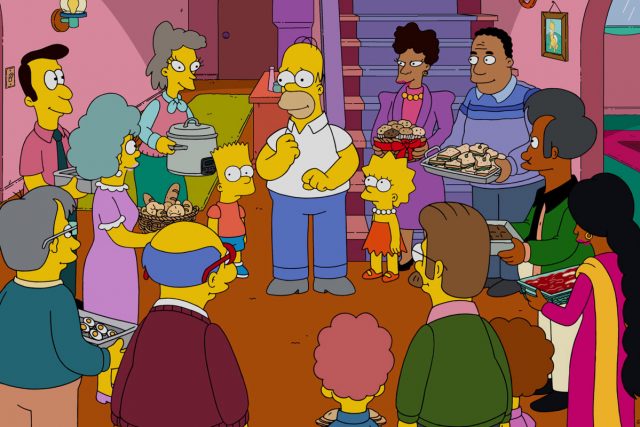 The Simpsons is ending the use of white actors to voice black and ethnic minority characters, producers have said. They had a regular black family and a regular Asian family. Why has it taken 31 years before they made the effort to find people of those backgrounds to voice the roles? Black people around the world were pleased to see representation in the popular series, but now feel cheated that it was not people of colour benefiting from inclusion behind the scenes.

The move follows years of controversy about the issue and calls for greater diversity within the entertainment industry.

It also comes against a backdrop of heightened tensions in the US about racism, following mass protests over the killing of black Americans by police, sparked by the death of George Floyd .

In a statement, the Fox network, which broadcasts the show, said: “Moving forward, The Simpsons will no longer have white actors voice non-white characters.”

The Simpsons, which has been on the air since 1989 and is syndicated in more than 100 countries, had faced public pressure for years over for having Hank Azaria, who is white, voicing Indian shopkeeper Apu.

Azaria said in January he would no longer perform the role , which had been criticised for reinforcing racial stereotypes.

He has also voiced the Simpsons characters of black police officer Lou and the Mexican-American Bumblebee Man.

Another white actor – Harry Shearer – voiced the character of Dr Hibbert, who is black.

Mike Henry, a white actor, who had lent his voice to Family Guy character Cleveland Brown since 1999, said on Twitter he was stepping down.

He said: “It’s been an honour to play Cleveland on Family Guy for 20 years. I love this character, but persons of colour should play characters of colour. Therefore, I will be stepping down from the role.”

Earlier this week Frozen star Kristen Bell revealed she too would no longer be lending her voice to a non-white character in Apple TV+ comedy Central Park.

In a statement on Instagram, Bell said her playing Molly, a mixed-race character, “shows a lack of awareness of my pervasive privilege”.

And actress Jenny Slate announced she will no longer voice a black character in the animated series Big Mouth, saying her taking the role was “engaging in an act of erasure of black people”.

We ask – why did this take so long? Simpson, the show has been going for 31 years. Black and Asian Actors could have earned salaries over the years which instead went to white families.

Black actors should have been earning salaries and royalties from this show. How can Simpson’s redress this situation? The announcement is great, but they have some making up to do.

Every time casting took place, the producers knew that there are thousands of Black and Asian actors out there, looking for work. They refused point blank to look for them or hire them. This leaves a bad taste in our mouths. And for other cast directors doing the same – let this discrimination and laziness end. It is just unfair and deceitful to the viewers. Let us make a more inclusive world.

Simpsons should redress this by adding more Black and Asian characters to the show and make donations to black organisations in restitution. Our viewership has also helped the shows success, judging by the syndication to 100 countries, and many of these are non-white.

We are not trying to make Hank, the current actor on Simpsons who voices the roles feel bad, but imagine how much Black and Asian characters could have earned over 31 years in salary and royalties. $100k per year, one million dollars a year, more…? How great it would have been for more black or Asian families to have benefited. Secure homes bought; Children given an easier life; investments made and Role Models showcased. Sigh…

Race and Ethnicity in London Statistics

Women Empowerment to Get a Boost